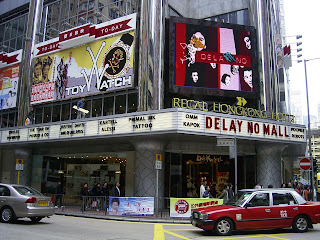 The 33rd Hong Kong International Film Festival kicked off last night. And although -- *sob!* -- I failed in my bid to get a ticket to the sold out screening of Ashes of Time Redux, I did manage to get tickets to 24 other HKIFF screenings. So here's providing this blog's readers with advance warning that I'll be a tad busy over the next few weeks.

At the same time, also want to point out that on the left-hand section of this blog is a section entitled Most recently viewed movies that I will be regularly updating. (And for the record, I've viewed two films -- namely, Shinjuku Incident and Still Walking -- shown as part of this film fest already!). If you see anything of interest that you want to discuss, feel free to do so on this entry's comments thread. Also, yes, when I get the chance, I will try to provide short write-ups of the HKIFF movies, etc. like I did last year (albeit probably with fewer photos of the stars because this year, I didn't apply for a press pass -- and, instead, fully intend to exercise my rights to being a film fan(atic) this time around!).

Wow... 24 films! But I guess considering the length of the festival that only averages to about 1 a day.

I obviously don't need to tell you to have fun!

Any thoughts you want to share on the Shinjuku Incident? My optimism is low mainly due to it being a recent Jackie Chan film -- though it is with director Derek Yee.

Wow, I'm impressed. Twenty-four films and you're working too!

Have a great time and we will understand if you're absent for awhile. Hehe..That's not to say I won't grouse a bit :-)

Have a great time and enjoy the festival!

Hope you'll have an enjoyable festival! Wish I could be there!!!

The 24 films average to about 1 film a day, four days out of five weekdays, and 2 films a day during the weekends. So not *too* insane a schedule... at least for a film fan(atic)! ;)

Let's just say for now that "Shinjuku Incident" would have been much better without Daniel Wu and with a real dramatic actor for its main star. Also, seems like Derek Yee's channelling too much of the Shaw Brothers spirit (he was a Shaw Brothers action star after all) and, on the face of this, I wish he would return to making dramas. :S

Yeah, and some days, I have to work late too! Am trying to schedule it so that I work late on the nights that the screening I'm due to go to is at 9:30/10pm rather than 7:15pm. Fingers crossed that it'll all work out okay!

Thanks, I'll definitely be trying to do so! :)

Wish you folks were here too. As it is, have already seen a few familiar faces -- along with movie personalities. ;)