Should you have thought that the Osaka Aquarium photo-essay was the last you'd see from my recent Japan trip, here's one last one that I hope continues to give people a different view of Japan from the usual stereotypes conjured up by visions of the chrysanthemum and the sword, the geisha and the warrior. For better or worse though, have to admit that the pictures in this photo-essay nonetheless can't help perpetuate but certain other stereotypes: i.e., of Osaka being a foodie haven, and there being amazing pockets of Zen in the country -- like Shosha-Zan Engyoji (aka the Engyoji Temple on Mount Shosha)... 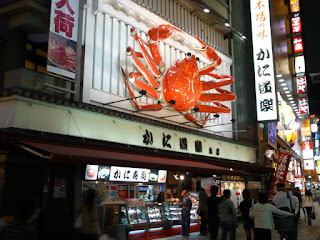 You know you're on Osaka's Dotonbori
when you see Kani-doraku's giant crab! :b 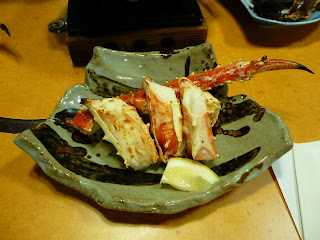 And you know you're in Kani-doraku when
you're presented with crab dishes like this one... 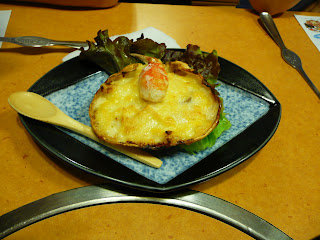 ...and this delicious, rich plus creamy mix
of baked cheese and crab roe :) 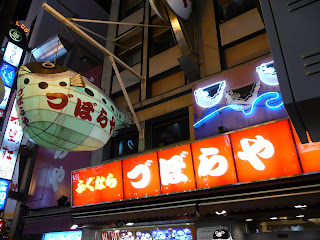 There's more than one fugu-ya (complete with a big
puffer fish mock-up to let you know it!) along Dotonbori
-- but Zuboraya is the one that got my patronage 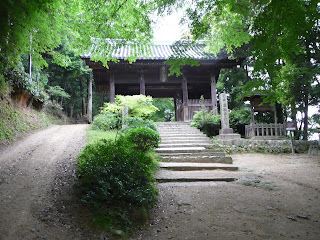 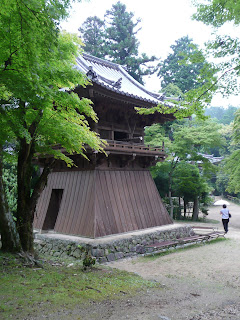 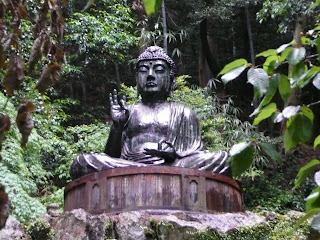 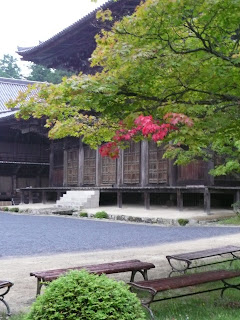 A splash of color in the vicinity of the area of Engoyji
known as the Three Temples which
includes the 10th century Daikodo (great auditorium)
and 12th century Jikido that originally served as priests' lodging
Posted by YTSL at 10:30 PM

I like your photo essays on Japan very much. Aiming to go to Japan in October and Osaka is a very possible destination and your photos are influencing me to force my friends to definitely include Osaka into our plans. =)

Seriously,your food photos are terrific. It makes me hungry to look at them.

I hope you do more foodie blogs about Hong Kong.

Aiyoh! So pathetic. Such big crab ends up so small on the table. I don't think I'll have enough of that tiny mini pieces of crab :P

Glad you like my Japan photo essays. Have enjoyed your photo essays of various parts of China. So... :)

Thanks but, ah, you haven't seen the food photos which were more blurry than I would have liked (including of another really nice crab dish at Kana-douraku)!

Re Hong Kong: I don't know -- often, I eat in a hurry or am so absorbed in conversation with a dinner friend that I don't think to take photos of food here!

Hahahaha! Small they may be but they were ever so good! And the five crab dishes shared among four left room for further rounds of eating that evening -- including a round of fugu and also some takoyaki! ;b

I'm glad you enjoy my China photos even though I've yet to complete Sichuan, Beijing and Guizhou. :)

This year, I've pretty much abandoned China though. I don't think I want to fight with a ton of people that'll descend upon China during the Olympics.

So I did a tour of Eastern Europe and hope to do my first trip to Japan this year too. May go check out Bangkok or Macau too.

Will probably return to China next year. Or maybe Mongolia. I really want to go to Mongolia and I've got a friend who's quite willing to too so... we'll see. =)

Have to admit that my old computer and I sometimes get overwhelmed by your China pictures because there are so many of them -- sometimes in a single blog entry! At the same time, do enjoy and live vicariously via them as Mainland China is not some place I feel all that equipped to travel (at least not by myself away from the major cities). ;S