Arsenal and the beautiful game 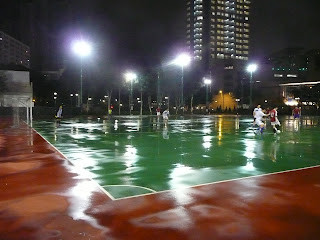 The first thing I did this morning after I woke up wasn't to go wash my face, brush my teeth or even switch on the electric water heater (to boil water for my coffee). Instead, it was to rush to my computer to go online and find out who my association football (soccer in American English) club of choice, Arsenal of North London, had signed before the closing of the transfer window on August 31.

To my joy, I discovered that Arsenal had brought in a total of five new experienced players (two of them captains of their countries -- South Korea and Israel -- and one other capped 79 times for Germany), three more than after I switched off the computer and decided to call it a night the previous evening. And even while I rue these transfers not taking place until after Arsenal lost 8-2 to Manchester United over the weekend (as well as lost 2-0 to Liverpool the previous weekend), they do go some way towards my restoring my faith in The Gunners as a while (management and board as well as team and club).

This all is a very good thing indeed to my mind -- and something that helps rest my mind and generally puts my ease. For, even while there may be some readers of this blog who do not yet realize this, I am as much a Gooner as I am a fan of Hello Kitty and Ponyo, among other things.

As a matter of fact, I've been an Arsenal supporter for much longer than I've been a lover of the furry feline and feisty fish creature. And at the risk of showing my age, I actually can vividly watching Arsenal beat Manchester United 3-2 -- after being tied at 2-2 with five minutes to go -- in the 1979 F.A. Cup Final as well as the 1989 Arsenal game at Anfield which The Gunners had to win by two clear goals in order to become league champions, the 1998 match vs Everton that Arsenal won 4-0 to clinch the English Premier League title, and so much more.

Being an Arsenal fan in particular (and association football in particular), it probably won't come as a surprise for me to state that I also enjoy playing the beautiful game. And it really gives me great joy and no small amount of pride to say that I've managed to play in several organized association football matches over the years -- including at varsity level (during my first two years at Beloit College) as well as intra-mural tournaments at college and a six a side indoor soccer league in Philadelphia some years later.

Somewhat sadly though, I only got to play organized soccer in the US -- but never did so in Malaysia (my home country) or England (where I attended boarding school) because in the time I've lived there, association football has been very much considered a sport for males rather than females. So it's somewhat ironic then that most of the time I've played the game in the US (and the one time in Singapore that I was on holiday and met up with a college friend with whom I regularly played soccer in Philadelphia, and in Tanzania, where I happily played with people half or even one third my age), it's been in a co-ed environment...

All in all, I've found that although I may not have the physical power and strength of many male football players, I have been able to at least match quite a few of them in playing skills. In addition, I've known several male football players who have been happy to have me on my team because of my attitude and team spirit as well as general footballing abilities. And although I've long since hung up my football boots (in favor of such as hiking), I definitely have many good footballing memories that come from my playing days (in addition to those that come courtesy of supporting and watching Arsenal).

To be sure, these include winning the state championship my freshman year at Beloit and scoring my first goal for the Beloit College varsity team. But, in all honesty, little achievements like winning tackles against macho men who thought they'd easily get past the tiny female left-back (i.e., moi), setting up someone else's brilliant goal or feeling like one had got this amazing, unspoken understanding with certain team-mates (Denise and Henry, if you ever read this, I'm talking about you) really are things I look back upon and treasure to this day. :)

"Oh my god, have they scored again?"

Maybe that's why he was prompted to move for the players he did in the last days of the transfer window -- for which I'm glad! :b

Good to know he's been given money to spend instead of the sack. Sad state of soccer these days. But boy was I glad to see Roy hodgeson go!

You sound like a Liverpool fan. If so, have to say that your club is definitely experiencing better times these days than this time last year! :)

I like Wenger's Arsenal. I like Manchester United more. But ultimately, it is best to play the game myself. I still do occasionally, the last time only about a week ago.

Part of me most definitely still wishes she could still be playing football. The thing is that it can be so hard to find the right team(mates). Also, I got a lot of injuries as a result of playing football (torn knee ligaments, torn ankle ligaments, cracked ribs, etc.) -- so am thinking it's better to go for a non-contact activity like hiking! ;S