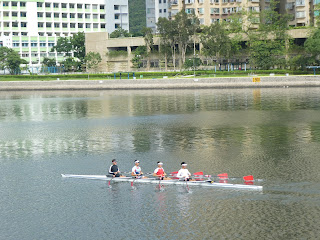 Men rowing on the Shing Mun River flowing through Sha Tin
(kind of like what you get to see in Men on the Dragon) ;)
Men on the Dragon  (Hong Kong, 2018)
- Sunny Chan, director and scriptwriter
- Starring: Francis Ng, Poon Chan Leung, Tony Wu Tsz-Tung, Jennifer Yu, Kenny Wong

This is one of those movies that I get the feeling that its distributors didn't have much confidence in.  The directorial debut of scriptwriter Sunny Chan, it's listed on the Hong Kong Movie Database (at least at the time of writing) as a 2017 production and had just a couple of screenings a day at inconvenient hours at a number of cinemas during the first couple weeks of its theatrical run here in Hong Kong.

Against the odds, Men on the Dragon has managed to not only stay in cinemas for a third and fourth week but its number of screenings per day actually increased in the third week.  In addition, I've heard a few friends talking about it, and positively too.  So off I went earlier this week (a few days before viewing Crazy Rich Asians) to see the underdog movie which appears to have won the hearts of a number of Hong Kong movie viewers.

Revolving around three lowly middle-aged male employees of the Pegasus Broadband company which seems to constantly be laying off staffers and their equally middle-aged male boss, Men on the Dragon has unlikely heroes but also likeable ones.  After their company decides to form a dragon boat team for an upcoming race that it plans to  broadcast live, frazzle-haired Lung (Francis Ng), Wong Suk-Yi (Poon Chan Leung) -- whose name sounds more like a woman's than man's -- and the intense William (Tony Wu Tsz-Tung) find themselves in the same boat (literally) as their hated boss, Tai (Kenny Wong).

There should be enough dragon boating (and training) scenes in the movie to satisfy fans of dragon boat races.  But quite a bit of action in Men on the Dragon actually takes place out of the water and in the homes of the men, which range from old tong lau to public housing to a luxurious (by Hong Kong standards) private flat.

Put another way: the film spends a surprising amount of time on the domestic lives and concerns of the men.  And while the initial impression one gets of them is that they're on the insensitive side, they all turn out to most definitely have feelings.  In fact, one of them is so prone to wearing his heart on his sleeve that the reason why he wears sunglasses so much of the time is to hide his eyes that are swollen from his crying so much!

Under normal circumstances, a movie with so much emotional content would prominently feature females -- and Men on the Dragon does have its share of female characters.  For the most part, however, their roles and appearances are not all that memorable; with the major exception being that of the dragon boat team's strict and committed young coach, Dorothy (Jennifer Yu)!

The impression I get is that the movie's depictions of middle-aged Hong Kong men has struck a chord with Hong Kongers in general.  Hence its surprising box office performance.  For my part, Men on the Dragon wins me over primarily because it actually defies lots of movie conventions -- and in so doing, steers a course that's entirely, admirably its own.

Thanks for the review. Sounds like 'The Way We Dance' in the way it starts small, gathers strong word of mouth and becomes a local box office hit!

It's interesting that you made the connection between it and "The Way We Dance". Both are very local films and have subject matter that doesn't normally gets shown/covered in Hong Kong movies. And yes, these are the kind of movies that keep me interested in following Hong Kong cinema and feeling that there is indeed life and creativity still in it. :)