Lest there be any doubt: I'm not yet done with blogging about my Spain experiences.  In fact, I'm not even done with blogging about the Alhambra: which was not only the top attraction on my "must visit in Spain" list but also turned out to be the place I ended up spending the most time in -- because there was so much to see that was so beautiful and fantastic (that I almost forgave those in charge of it for officially banning regular-sized backpacks -- which resulted in Puppet Ponyo not accompanying me on my visit to this wondrous place -- and then seeing that they weren't strictly enforcing that rule at all)!

All in all, I ended up spending about eight hours exploring various nooks and crannies within Granada's palatine hilltop city.  And while there are those who believe that the unquestionably sublime Palacios Nazaries provides 80 percent of the Alhambra's thrills, I also did enjoy viewing the architecture of Charles V's Palace (and the Museo de la Alhambra along with an atmospheric temporary exhibition installed within its walls), the panoramic vistas to be had from the Alcazaba (fort) and the exquisitely green summer retreat of the sultans that was the Generalife... :) 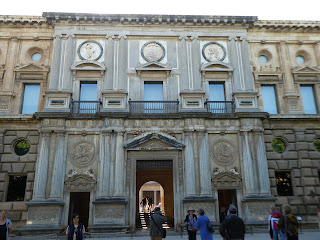 The Christian Charles V's Palace is geographically close to
the Palacios Nazaries but so very far apart in style! 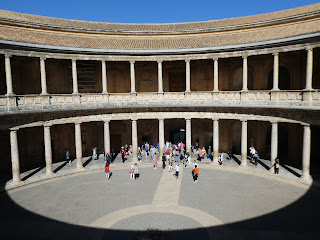 At the center of Spain's most impressive Renaissance building
is the large empty space that's the circular courtyard :O 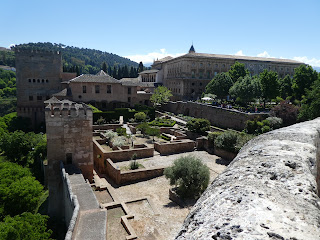 View of the Palacios Nazaries, Charles V's Palace
and Plaza Aljibes from the Alcazaba

Click on the above picture to view an enlarged shot of
the Alcazabar's main tower and the town below :) 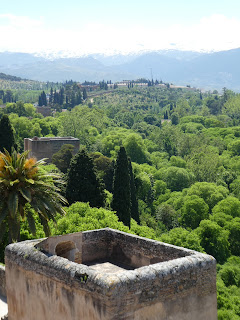 Looking out at the Spanish Sierra Nevada mountains
which are snow-capped, as per their name :)

Another panoramic view to savor -- this one from the Generalife 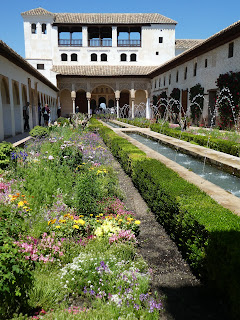 The flower-filled courtyard of
the small palace in the Generalife 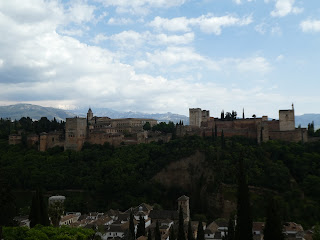 View from San Nicolas Viewpoint of the palace complex that was
the greatest and also last Moorish stronghold in Europe
Posted by YTSL at 9:44 PM

Excellent pano from the Alcazaba! That was around midday?

Took that panoramic photo just after lunch -- so, yep, around midday! :)