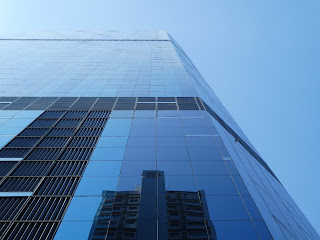 Earlier this month, the sky was often so bright blue
that it looked almost unnaturally so! 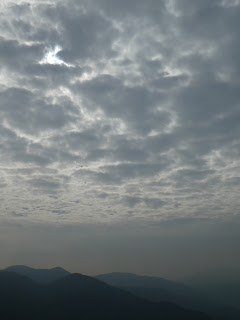 These days though, it's more cloudy gray
but still eye-catching in its own way
Many years ago, when I was still living in Philadelphia, I watched an enchanting Hong Kong movie called Chungking Express that brought to my attention the existence of such as the Central-Mid-Levels Escalator (or Travelor), whose very concept I had trouble wrapping my head around until I came over to the Big Lychee and rode on it.  Something else that struck me at the time as rather odd in the film was how quickly the clouds moved in a section of the cinematic offering where the camera had been trained upwards to showcase the sky along with buildings on whose tops appeared to be covered with various antennae and wires.
Disinclined to think too much about the whys and wherefores of it, I just got to assuming that that section of film had been speeded up for artistic purposes.  And it was only after I moved to Hong Kong that I got to realizing that there really are days when the clouds do move pretty fast in the sky here in the part of the world whose local term for big winds (i.e., the Cantonese tai fung) has contributed the area's tropical cyclones being known as "typhoon".
Since moving to Hong Kong, I also find myself looking up at the sky far more than I fancy that I used to do so.  During many a hot summer's day, I tell myself to focus on how beautifully bright blue -- and cloudless -- the sky can be.  When part of me gets upset at how hellishly uncomfortable the heat can make one feel from as early as mid May and as late as mid October, I try to console myself by enjoying how brilliantly blue the sky above me is as well as how far one can clearly see during those times of the year when the winds blow in from the south.
Sadly, when the temperatures drop to comfortable levels -- usually around late October -- is when the skies tend to turn considerably grayer as well as more cloudy, and there is a noticeable drop in the visibility levels.  But whereas gray skies and days can get me down if they are around for an extended period of time, there also are occasions when I fancy that they actually look beautiful in their own right, and even pleasantly dreamy.
Take a recent afternoon when I was up on 546-meter-high Kwun Yam Shan, at the Kadoorie Farm and Botanic Garden. Yes, there were bits of blue in the sky but the predominant color was gray.  Yet I found the sky to be pretty spectacular looking, thanks to the many clouds floating about in it that threatened to block out much of the sun's light -- though it's also true enough that what sun rays that were let through really did help to brighten up things in a very visually pleasant way.  And yes, at times like that, you can't help but think that nature can be so very beautiful -- and that so much actually is still right with the world after all. ;b
Posted by YTSL at 11:54 PM