Shock Wave is designed to shock and awe, and does so! (film review) 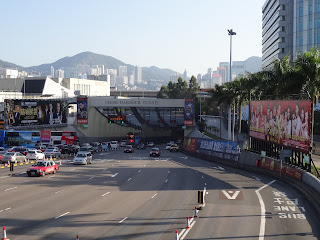 Eight days after Herman Yau's 77 Heartbreaks and three days after the prolific Hong Kong filmmaker's The Sleep Curse screened at this year's Hong Kong International Film Festival, his third directorial outing of 2017 -- and third collaboration of the year with scriptwriter Erica Li, as it so happens -- opened in local cinemas.  When pondering why Shock Wave was not selected to appear in the fest along with those two other movies, I considered the possibility that the fest programmers had thought its quality was lower than the films that had made the cut.

But after viewing this dynamite blockbuster, I'm inclined to believe that the reasoning behind this decision was more along the lines of the HKIFF programmers thinking that it was a mainstream crowdpleaser that would have no problem finding audiences at the multiplex (unlike the more niche likes of the Category III-rated The Sleep Curse).  For there surely is no way that anyone would consider Shock Wave to be a lesser work than the director's two other 2017 offerings.  And for the record: I also think this crime action-thriller is better than Nessun Dorma and at least on par with The Mobfathers, the two Herman Yau films that premiered at last year's Hong Kong International Film Festival!

Produced by and starring entertainment mega-luminary Andy Lau, Shock Wave tells the story of an Explosive Ordnance Disposal Bureau (EOD) legend who makes a deadly enemy of a Mainland Chinese master criminal after the latter's kid brother is nabbed in a police operation that involved the protagonist going undercover to infiltrate the gang (and, in Peng Hong's eyes, betray them).  Superintendent Cheung (Andy Lau) regularly faces far more danger while doing his job than most other cops.  But he -- and, indeed, the entire Hong Kong police force -- are tested like never before after the vengeful Peng Hong (Jiang Wu) plots to have his brother (Wang Ziji) freed by way of an ambitious operation that involves blocking the Cross Harbour Tunnel and possibly even blowing it up.

There's little doubting that Shock Wave is first and foremost intended to shock and awe in an entertaining way.  This it does in spades, aided by having some absolutely stunning action scenes (directed by Dion Lam, with car stunts supervised by Thomson Ng) and also impressive set design (courtesy of art director Eric Lam and his team) that included producing a very realistic mock-up of the Cross Harbour Tunnel (which I only knew was not the real McCoy because there is no way that the world's busiest underwater thoroughfare could be shut down for the amount of time that it'd be needed to shoot the film's Cross Harbour Tunnel scenes!).

But it's also interesting to reflect on some of the thinking behind certain story choices.  For example, at a time when the Hong Kong police are no longer automatically regarded as sympathetic heroes, Herman Yau and Andy Lau have chosen -- and managed -- to make a film where few people will have problems or trouble rooting, and even caring, for certain members of the local constabulary, if not the Hong Kong police as a whole.  And this feat is all the more amazing in view of there not having been that much time to get to really know certain individuals -- such as the dedicated Regional Crime Unit chief inspector (portrayed by Philip Keung) who often works closely with Superintendent Cheung and the young police officer (essayed by Babyjohn Choi) who is able to do his duty even when obviously terrified as well as in grave danger -- on account of this movie being super heavy on the explosive action.

It's intriguing too that the villains of the piece are precisely the kind of people that many Hong Kongers are inclined to not think all that well of: namely, Mainland Chinese individuals seeking to enrich themselves at the expense of Hong Kongers along with obviously non-ethnic Chinese mercenaries (who Peng Hong had enlisted to take part in his ultra-ambitious revenge operation), and the kind of slimy local businessman who is as financially wealthy as he is morally bankrupt.  I guess this all particularly stood out for me since, in pretty stark contrast, the regular Hong Kong folks -- not just its constabulary -- come across as filled with humanity, including the nice tour guide (played by Louis Cheung) who actually cared about the people he'd been entrusted with showing around his fair city!
Nonetheless, there are certain expected filmic concessions to be made on account of Shock Wave being a Hong Kong-Mainland Chinese co-production: including the obligatory Mainland Chinese female lead since the movie's male lead is from Hong Kong.  About the best thing I can say about Song Jia is that she does exhibit some chemistry with Andy Lau when playing his character's (Canadian Chinese) girlfriend.  At the same time, I wish those who had dubbed her, Jiang Wu and Wang Ziji into Cantonese had worked made it less obvious that we were not hearing their real voices; and it's hoped that those who dubbed Andy Lau and his Cantonese-speaking cohorts for the Putonghua version of the the movie did a better job.
My rating for this film: 7.5
Posted by YTSL at 11:24 PM