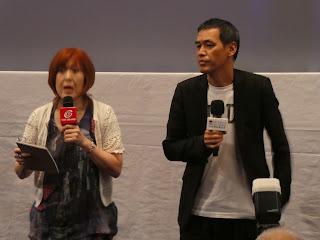 Filmmaker Sabu and an (over-)animated translator at the
Hong Kong International Film Festival screening of his latest film ;b

What do you do if you're a filmmaker and you want a charismatic star who can't speak your native language to be in your movie?  If you're Taiwanese auteur Hou Hsiao Hsien, you cast Hong Kong superstar Tony Leung Chiu Wai as a mute man in City of Sadness.  And if you're Japanese director-scriptwriter Sabu, you come up with a story where Taiwanese actor Chang Chen can have the leading role as a Taiwanese hitman who doesn't like to talk much and ends up spending time in an out of the way Japanese community with colorful characters who fall in love with his cooking!

With well-shot violent action segments, delicious food scenes and sweetly romantic moments, Mr. Long appears on one level to be the sort of movie that would be at home in a regular multiplex.  But the thoroughly creative way in which its story is put together, and confident and bravura filmmaking along with its extreme mood swings ensured that this cinematic offering would have a rapturous reception at its Asian premiere at the Hong Kong International Film Festival early last week.

Chang Chen mesmerizes as the titular character from the very first moment that he appears in Mr. Long until the very last in the film.  Early on, Taiwanese professional assassin Mr. Long shows how fatal he can be with the six-inch knife that's his weapon of choice.  But an attempted hit in Tokyo doesn't go according to plan and he quickly ends up becoming the prey rather than the hunter, holing himself up in the abandoned section of a small Japanese town where, it seems, neighborliness is the order of the day and strangers, even those who can't speak the local language, are welcome if they do such as reveal -- as Mr. Long does -- a talent for cooking, sometimes even with very humble ingredients.

In addition to having the good fortune to encounter generous-hearted Japanese townspeople who, without much ado, decide to help him to set up a yatai (food cart) serving up Taiwanese beef noodles, Long San (as he's referred to by the Japanese) also is befriended by a young boy named Jun (Bai Run Yin) who, helpfully, turns out to be able to speak Mandarin as well as Japanese courtesy of his having a Taiwanese mother and Japanese father.  Initially, all this comes across as disconcertingly improbable.  But as bitter elements are revealed to exist in the overall tale, this (re)viewer came to treasure the sweet moments that help balance things (along with the bursts of physical action that similarly complement Long San's otherwise generally still disposition).

By far the most tragic figure in Mr. Long is Jun's mother, Lily (Yao Yi Ti).  A junkie when she first appears in the film, the audience also learns in flashbacks of such as her ill-fated love affair with Jun's father, Kenji (Sho Aoyogi), who, turns out to have a connection to the yakuza now looking for Long San.  Doing what she can to raise their son (including sell her body to unsavory individuals), Lily's care for Jun comes to feel quite heroic.

Still, there's little doubt who the main hero of this movie is.  And while both Mr. Long the film and character may seem like it takes a while to get going or even truly find its way, chances are that audiences be won over by both the film and titular character way before things draw to a heart-warmingly satisfying close.