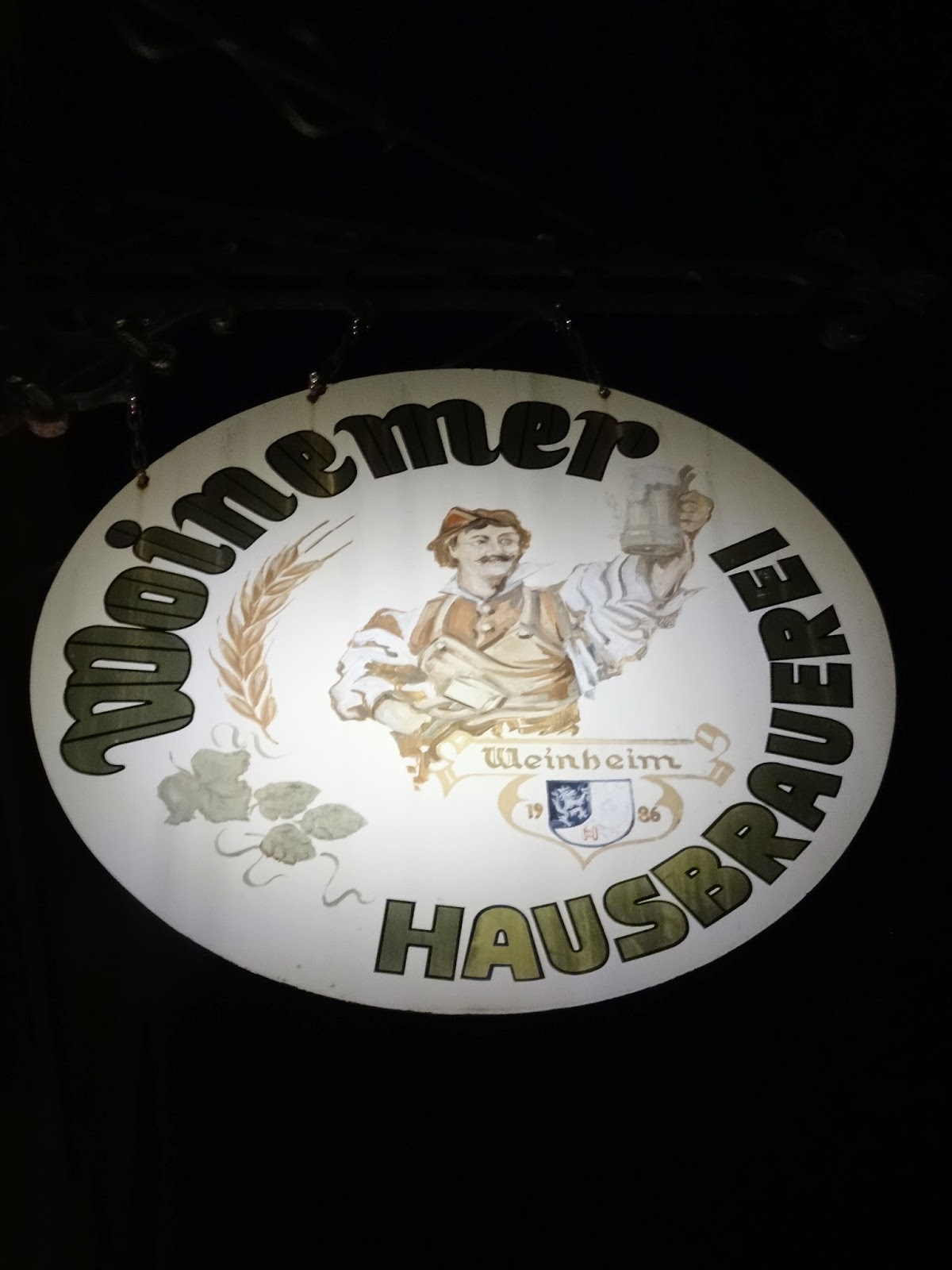 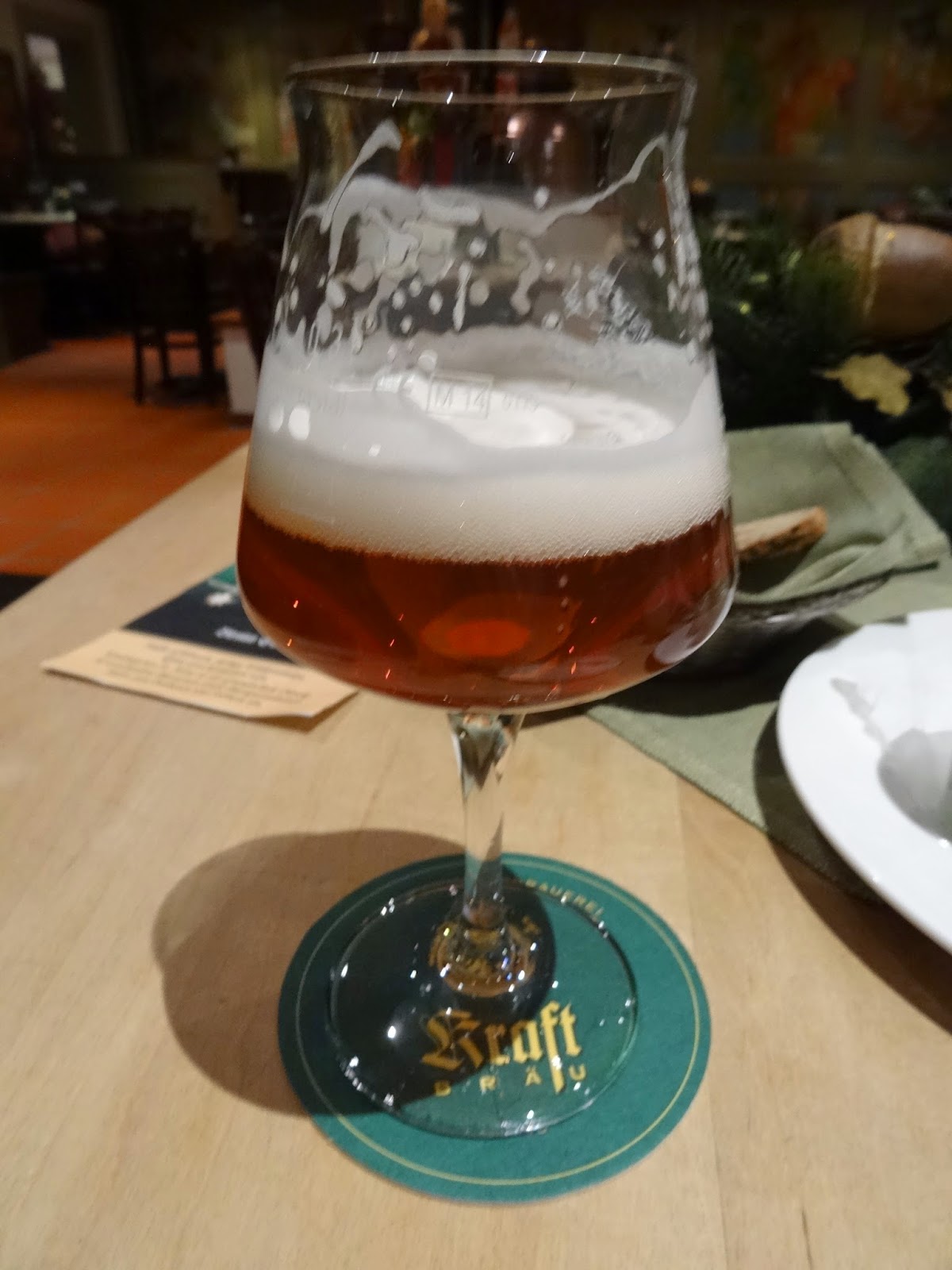 In Trier, I had sampled five very different
beers at Kraft Brau 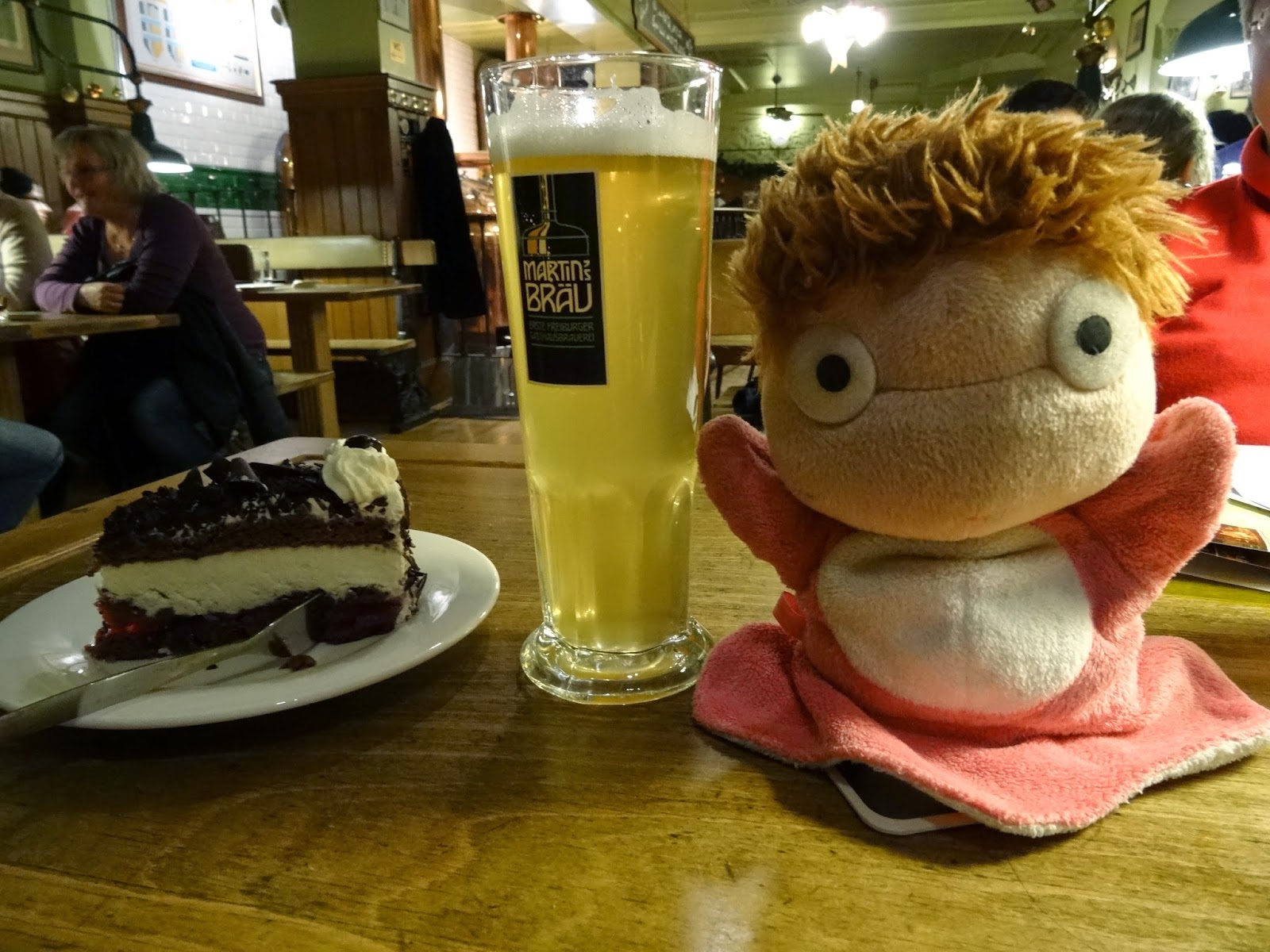 And at Martin's Brau in Freiburg, Puppet Ponyo happily posed
with a glass of weissbier radler that was taller than her as well as
a slice of very alcoholic Black Forest cake!

Shocking but true: the first two days of my recent Germany and Luxembourg trip, I didn't drink any beer.  This was because I was trying to get rid of a lingering cough I had brought with me from Hong Kong.  But on the evening of day three, I couldn't contain myself any more -- and had a beer at dinner at a ratskeller in Trier's aldstadt.

Sadly, that first beer I had in Germany was from a bottle and wasn't particularly distinguished.  Realizing that we couldn't just stumble upon a great beer place in Trier, on account of it being in a part of Germany that was more into wine than beer drinking and producing, my German friend and I decided we needed to get expert advice from the local tourist office -- and were accordingly steered to a craft brewery away from the city center that required a taxi ride to get to but turned out to be very much worth our while.

A word on my German friend: as unlikely as it may seem, she's a German who doesn't usually drink beer!  But she's happy to see me enjoying beer, especially good German beer, and sip some of what I have whenever we visit biergartens, bierkellers and brauhauses together -- and partake of the usually pretty good food that they also have to offer!!


At Trier's Kraft Brau, we were told that they had six different beers on tap -- all of which had been brewed on the premises, and which our server offered to serve in 100 millileter portions to allow me to sample a number of them.  Although I had hoped to try all six beers, I ended up stopping after five as the lowest alcohol beer they offered was a 4.8% alcohol keller-pils and their most alcoholic brew was the pretty well named 10.5% alcohol strong ale!


Of the beers I tried at Kraft Brau, I liked their seasonal Adventsbock best.  So when we went to the Woinemer Hausbrauerei in Weinheim a few days later, I was happy to find that it too had a similar seasonal beer on offer which the server told me was only available for six weeks each year.  As at Kraft Brau, I really enjoyed the Christmas beer on tap there.  But actually even better was another unusual draft beer available there -- one which had been smoked and, to my mind, smelt and tasted smokey and got me thinking of grilled meat!


Ideally, we'd have spent more time sampling beers at the Weinheim brewhouse that was the case.  But since it was uncommonly crowded to the point that we only got seats outside (and even then, it was because my German friend told the servers that I was a major "beer fan" who had come from thousands of kilometers away!), it soon got too chilly for us to really feel comfortable hanging out ther in the cold outdoor area!  (Also, it was at the Woinemer Hausbrauerei that we encountered the one and only obviously soused person on this recent trip -- and it was a Russian man (rather than native German individual) who looked to have gotten drunk on gluhwein at a company party!

Before I headed back to Hong Kong, I had one more draft drink at a brauhaus -- this time at Martin's Brau in Freiburg.  Having already had a large glass of beer with my lunch a few hours earlier, I decided to go for a radler -- i.e., a beer-lemonade mix that's similar to the British shandy -- rather than regular beer.  Although I've had shandys consisting of lemonade mixed with lager and also ones consisting of lemonade mixed with ale, it was at Martin's Brau that I had my first lemonade weissbier mix -- and I thought it was pretty tasty and refreshing!

More than incidentally, there were two things that got me giggling at Martin's Brau.  The first was that the delicious slice of Black Forest cake that my German friend ordered -- and I tried a bit of -- was more alcoholic than my radler; and the second was that as I posed Puppet Ponyo for a photo, the Frenchwoman sitting next to me at our communal table actually recognized that my beloved travelling companion was a Hayao Miyazaki creation, and proceeded to tell me that she had seen a bunch of other Studio Ghibli movies, not just Ponyo on the Cliff by the Sea! (And for the record: no, Puppet Ponyo did not have any beer, radler or otherwise.  She's way below the drinking age after all! ;b )
Posted by YTSL at 11:30 PM

A good beer sampling photo-essay was about the only thing missing from your vacation blog - and now you've delivered it!

I just returned from the hospital after hernia surgery and feel quite sore and miserable. However, seeing the photo of your travel companion, Ponyo, really makes me feel happy. Thanks for lifting my spirits, Fraulein Ponyo!

I'd never want to not have beer in Germany -- the draft varieties are really too good to miss! And Puppet Ponyo is happy she helped to lift your spirits and wishes you "get well soon". ;)