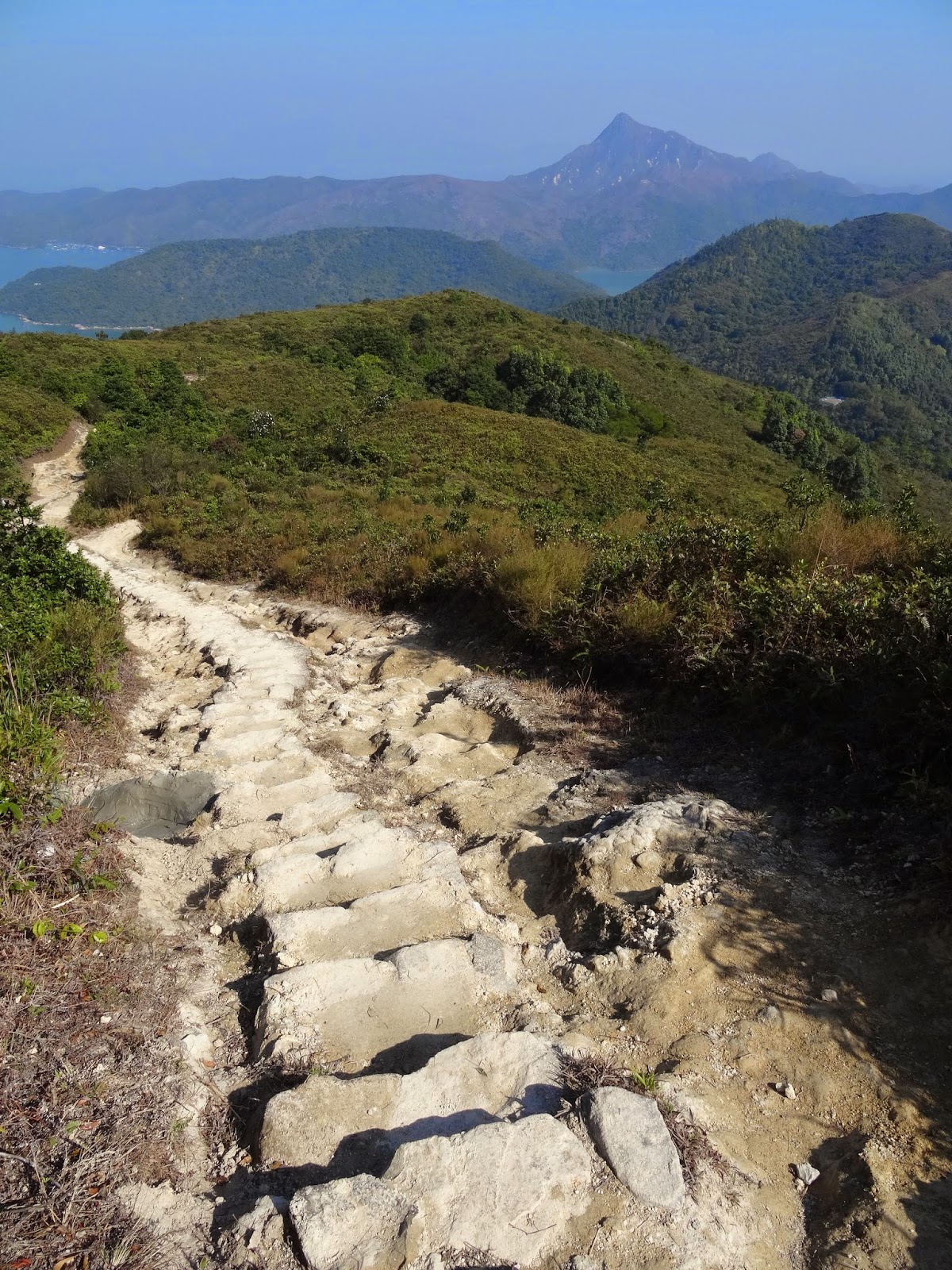 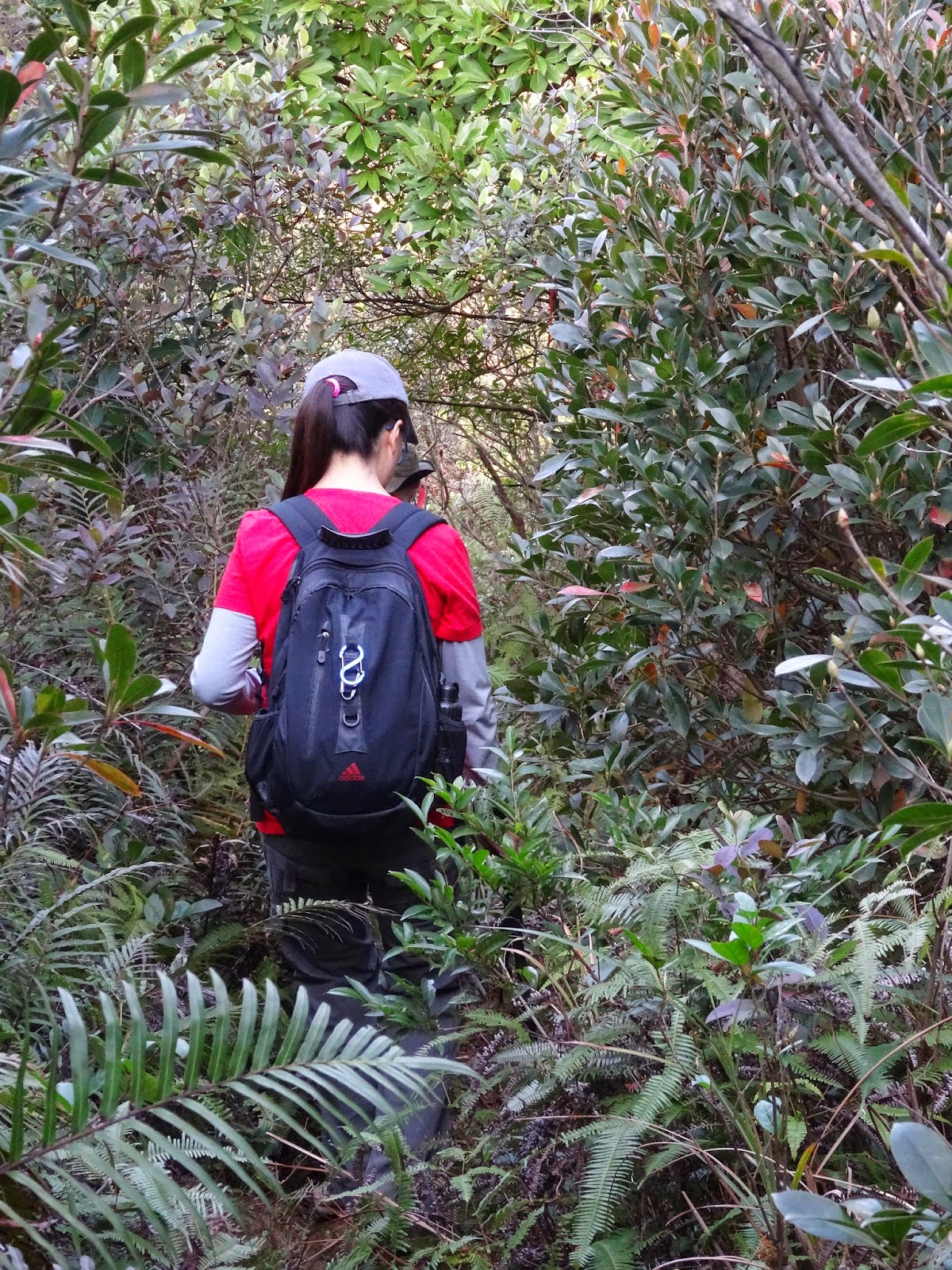 The middle part of the hike was on the
overgrown -- and also hairy -- side though! 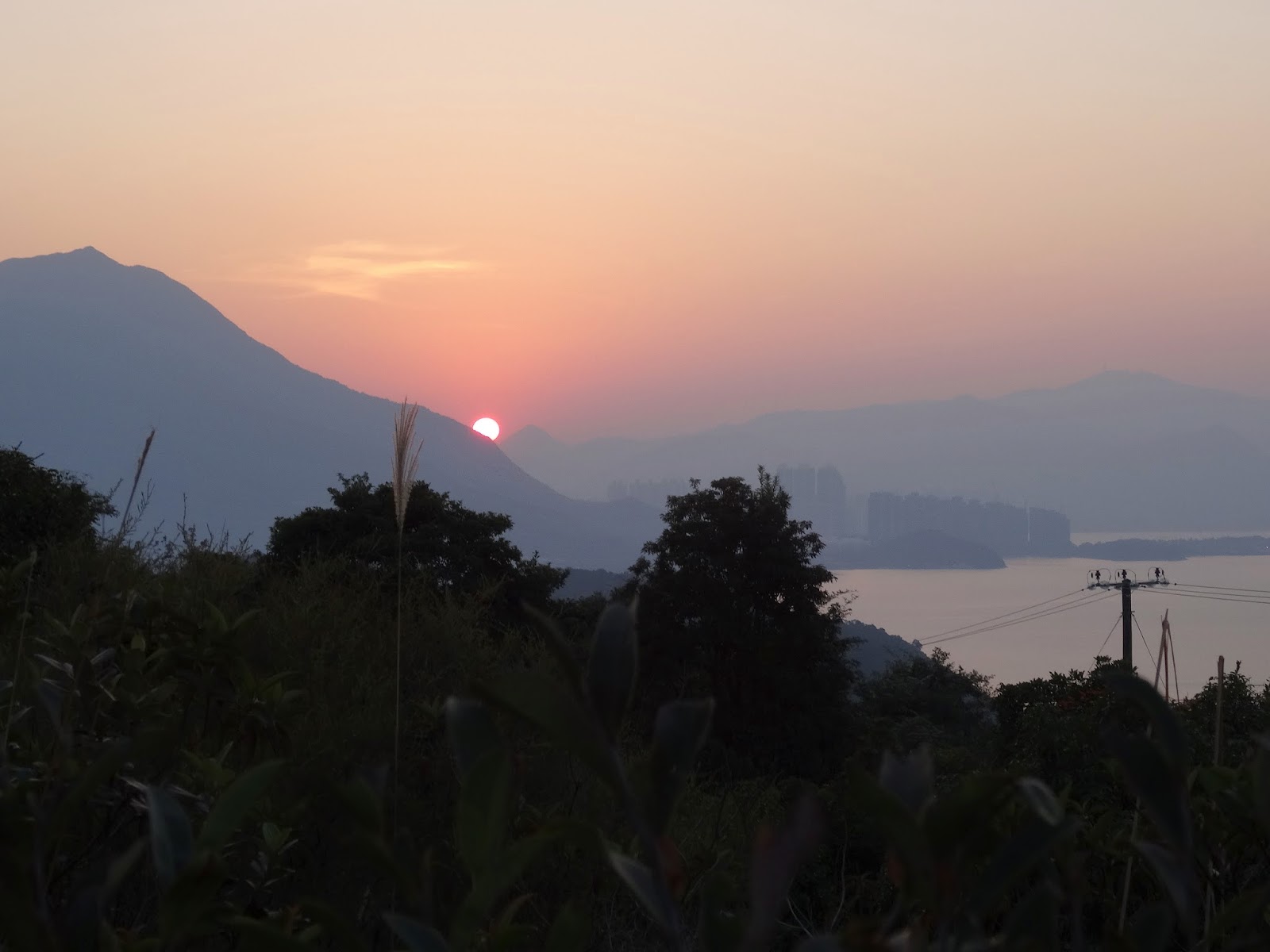 Even while trying to finish our hike before dark, it still
was impossible to resist stopping to take this photo... ;S

The first day of 2015 saw three friends and I go hiking in Sai Kung West Country Park.  Our route began with a pull up the first few kilometers of Stage 3 of the Maclehose Trail -- a section that gives up wonderful views in return for some effort spent going steeply up one of Hong Kong's many hills, and one which I've been on twice before but/and liked so much that I definitely am not discinclined to revisit that trail.


After a brief stop at Cheung Sheung Plateau, we proceeded along a section of trail that I had never previously been on before to She Shek Au.  On my Sai Kung & Clear Water Bay Countryside Map, this footpath was a solid lined one: that is, on that was major -- as in, well frequented -- and/or made for easy walking.  But none of my friends who were on today's hike with me or myself would say that was indeed the case.

Looking back, we should have known that this particular trail was not an easy one when we had trouble spotting its branch off point.  But since the first few hundred meters after we finally got onto it was comfortable enough to go along, we ended up persisting along the route -- even after we got to sections of it that were on the overgrown and narrow side, and also on the scarily edge of hills with steep drops!

To cut a long story short: a section of trail that I had thought would take less than an hour to go along -- because, among other things, on the map, it didn't have too many ups and downs -- ended up taking about three hours to go along.  For a time, I got to worrying that we would not be able to complete this problematic section before nightfall -- which would absolutely not have been ideal since, even in daylight, this was a trail that my friends and I all agree definitely should be a dotted footpath (i.e., difficult/indistinct or seasonally overgrown) on the hiking map.


Happily, we kept our heads and slowly but surely managed to complete this at times pretty scary section of trail and connect to a footpath that led to Pak Sha O and held no fears for me -- not least because I had been on it before and knew that it was easy enough to go along.  Even though the sun set about 10 minutes after we got onto that last section of trail at She Shek Au, I didn't much care.  Rather, I (and my friends) were just so glad and relieved that we had completed that scary middle section of our hike -- and in the nick of time too!


Suffice to say that we all agreed that this was a truly memorable hike -- and, also, that we never want to go along that footpath between Cheung Sheung Plateau and She Shek Au ever again!  Rather than look back at the experience as an utter nightmare, however, the sense is that some good has come out of it.

One of my friends said after the hike that she had found it exciting in a not necessarily bad way; another said experiences like this made him feel alive!  As for myself, after managing to complete such a hike, I get the sense that maybe I'm actually able to "do" more difficult hikes than I previously realized -- and have a feeling of achievement at having come out of today's okay, and still in one piece.  Oh, and I definitely am planning to head to a branch of Protrek in the very near future to get the latest edition of the Sai Kung countryside map -- and boy, will I be pissed off if I see this footpath drawn as a solid line on it!!
Posted by YTSL at 11:59 PM

This entry describes a hike which impresses me as being in parts something of a challenge and maybe for some, a physical ordeal...I traced this route on my outdated Countryside Series Map...Stage 3 of McLehose and Pak Sha O are two things I must do when I visit HK again...However, no way would I go via the "middle section" of your route. (As a youth on a hiking trail I encountered snakes on an overgrown section of a trail. Since then, I've learned to be very cautious on overgrown trails, and they are indeed "problematic" for me).


Well, judging by your outstanding vertical shot of the stone steps and also the sunset shot - I'm sure you and your hiking companions felt a sense of accomplishment...A good meal afterwards would be a fitting way to cap off the day's adventure.

That middle section of the hike -- is the trail drawn as a solid line or dotted line on the map you have? Just got the latest (2014) edition and wouldn't you know it, the solid line from five years previously had turned dotted!

A couple of my hiking companions got a real high out of the hike, one felt absolutely shattered while I just felt relieved to have made it! But yes, we all had a good meal afterwards -- and after all the exertions, had no compulsion against having good sized portions of food on our plates! ;b

On the outdated Countryside map I have, the route from Cheung Sheung all the way to She Shek Au is indicated by a dotted line. Beyond that it continues as a dotted line for a short way, then the line is solid all the way to Pak Sha O...BTW, did you use public transportation to Pak Tam Au, and begin this hike from there?

Interesting! So that trail was a dotted line on a map, then became a solid line, and now is back to being a dotted line!

And yes, we started the hike from Pak Tam Au. Took the number 7 green minibus from Sai Kung and it stops, when you ask it to, along the way to Hoi Ha. :)