Farewell to a(nother) friend but hopefully au revoir rather than goodbye? 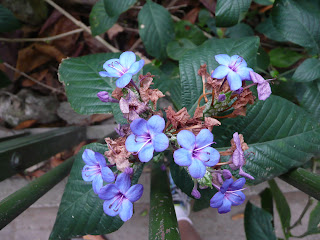 Blue's a beautiful color and can make for a pretty sight... 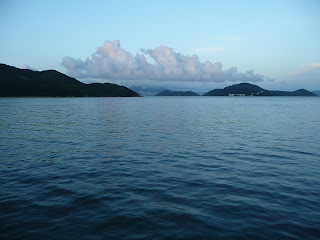 ...but blue is not how I like feeling :S

I'll be honest: This has not been the happiest of weekends for me for a number of reasons.  One of them involves different factors, including the weather, conspiring against my being able to go hiking today.  A second involved an annoying dealing with a bank customer services representative.  But by far the major dampener this weekend stems from my finding out that a good friend is leaving Hong Kong in a few months' time.

It's funny (peculiar, rather than "ha ha").  Pretty much everywhere I've been before, it's been a case of my leaving people behind or at around the same time as a bunch of people (e.g., in the case of college) rather than people leaving before me.  But this friend is the sixth good friend I've made in Hong Kong who'll have left Hong Kong before I do -- an average of one good friend lost each year that I've lived here in the Big Lychee.

I suppose technically, the one I count as the first good friend who's left doesn't count in that we met just weeks before she left Hong Kong -- on a hike from Tung Chung to Tai O -- but we've become good friends in the years since as we've kept in touch and meet up for a meal or hike pretty much every time she visits again -- which is about two or three times a year.  (She's one of those true jet-setters -- an area manager for an international company who spends a few weeks or months in many different places a year.)

On the other hand, my German friend who introduced that first friend to me certainly was someone I became good friends with when she was a resident of Hong Kong and I was pretty upset when I first heard that she was being set back to her fatherland by her company.  Happily though, she returns to visit each year and I've also gone and visited her in Germany.

Two other friends -- a British Chinese pal who I first met when visiting Hong Kong and my Singaporean foodie friend who I used to try out new restaurants and different cuisines (Manchurian, Russian, Mexican, etc.!) with -- have also returned to Hong Kong for at least one visit after they left.  Coincidentally, they now live in New York; one having left after he decided that Hong Kong was not for him, the other because he got a much better job in New York than he had managed to get in Hong Kong (but hopes one day to be able to return for a longer term in Hong Kong as, like my German friend and I, he really has a genuine love of the place).

Sadly, I've not seen my hiking buddy who I only recently wrote about since she left Hong Kong more than a year ago now.  (Yes, I've way behind with my hiking photo-essays!)  Hong Kong born, her family immigrated to Canada when she was around age 5 before returning a few years ago.  Since she considers herself a Canadian, I guess it was inevitable that she'd head back there some day.  But the major reason why she left when she did was because, like with my Singaporean foodie friend, she got offered a better job (or, at least, better pay and work hours) in Canada than she had here in Hong Kong.

The latest of my friends who has announced that she'll be leaving Hong Kong is another Hong Kong-born Canadian citizen.  She and her widower father and sister are heading back to Canada, she told me, because they've now got way more relatives in Canada than in Hong Kong.  I'm not sure if she'll be returning to Hong Kong for visits after she moves away from Hong Kong for the second time in her life.  I hope so though, of course.

In any event, I'm going to try to console myself -- as I've done in the case of my other friends who've left -- with the memories of all the good times we've (already) shared even while I can't help feeling blue that there won't be so many opportunities to add to them in the future. :S
Posted by YTSL at 10:27 PM

If it's any consolation I like your second picture! Great shot!

Yes... Hong Kong is a transient place, but the fact that you've met some wonderful friends here is very special. When I lived in Toronto, I only managed to make one good new friend which is why I don't care much for Hogtown!

Glad you like that second shot! And, actually, have to say that writing that blog post actually helped me feel better. Got it off my chest, you know? :)

Goodbyes of any kind are always hard :(

I know how you feel, a dear friend of mine said goodbye recently.

I miss him very much.

Especially when they concern people you really like... :S

Thanks for commenting. Haven't "seen" you in a while! :)

You have been blessed and lucky to have met and had the opportunity to create the cherished memories with wonderful interesting friends from everywhere:)

It's true -- I've been blessed and lucky to have befriended people from many different parts of the world. :)

Parting with dear ones is always a painful affair. And quite inevitable in today's fast paced world. Like you say, the best we can hope is to be able to meet again in future. Beautiful pictures!

Thanks for your comments. As you say, parting with dear ones is inevitable -- and there are indeed hopes and chances to meet again in the future. :)