In some parts of Hong Kong, place names abound that can make one think that one is on another continent other than Asia. (I think in particular of Hong Kong Island and its locations like Aberdeen, Stanley, Kennedy Town, Victoria Park, Mounts Davis, Butler and Parker, and Jardine's Lookout -- though it also is true that many, if not all, of these places also do have Chinese names -- such as Chek Chue for Stanley and Hong Kong Tsai (Little Hong Kong) for Aberdeen.)

In contrast, a look at the hiking trail that takes one from Mui Wo to Tai Ho Wan -- and, at certain points, it felt, back in time -- yields nothing but locales with distinctly Cantonese names like Pak Ngan Heung, A Po Long, Hung Fa Ngan, Tin Liu, Ngau Kwu Long and Pak Mong! And it's near A Po Long where my previous photo-essay left off and that -- without further ado -- this photo-essay that will complete a trio of photo-essays (including the first one of the greater Mui Wo area) covering this Lantau Island hike now begins... ;b 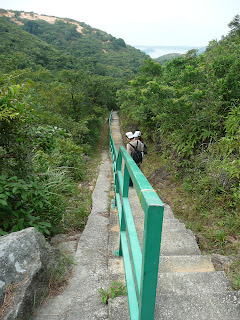 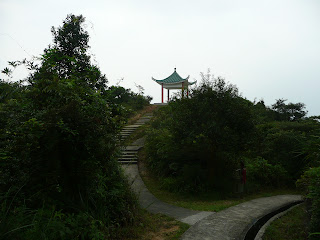 Between Hung Fa Ngan and Tin Liu, there is a pavilion
which provides shade, and from where good views could be had 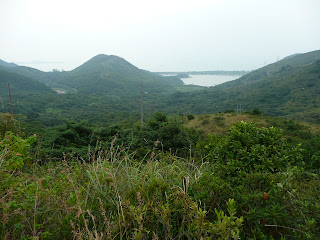 The smaller, enclosed body of water visible in this photo
is Tai Ho Wan -- where this hike would end 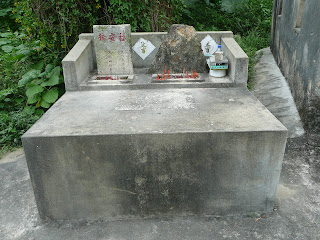 An earth god shrine at the village of Ngau Kwu Long 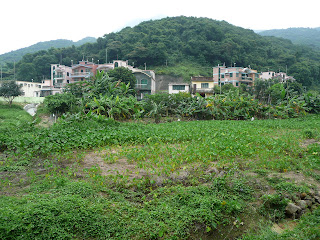 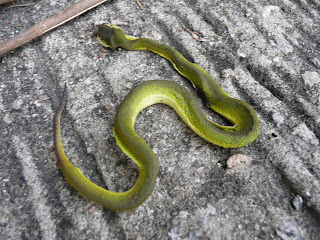 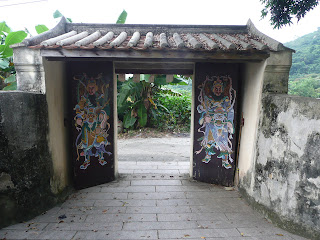 Door gods at the entrance to Pak Mong village 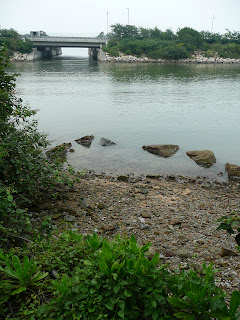 Tai Ho Wan at long last! (And from there,
we were just a stone's throw from the North Lantau
Highway and access to public transportation!!) :)
Posted by YTSL at 11:10 PM

Interesting and enjoyable essay and photos. I like the guys on the doors. Wouldn't it be cool to have something like them painted on the door to one's house or apartment. Hehehe...would doing this make one cool or weird?

This is the only walk you have described that I would be happy to skip--long and downhill can be a difficult combination, at least for me.

Agree with sbk, the door guardians/gods are lovely and would add a bit of panache to any doorway.

To each his/her own... I personally prefer a Hello Kitty and Dear Daniel auspicious banner on my door. ;b

Aiyah, it's only one part of the hike that's downhill... for first, you have to go uphill! Also, is 6.5 kilometer long to you? It's actually middling for me -- and the thing that I really did like with the hike is the visual diversity (villages, disused mine, waterfall, etc.!) within such a relatively short distance. ;b

Hello Kitty and Dear Daniel auspicious banner on your door...for real...if so can we see a photo pretty please???

Eeeeeeeeee at your request. It's a little bit too close to home... but I'll think about it! ;b

Walking for me is more a plain vanilla experience than your delightful and delightfully depicted hikes. I concentrate on number of steps per minute and time walked and therefore walk on nice long, flat stretches of suburban sidewalks with occasional hills for variety/challenge.

But yeah, know what you mean about descents often being less pleasant than going uphill. I have a bit of vertigo, so steep descents can really feel very formidable to me. And even while I/we may be in a minority, I really do prefer to go up Jacob's Ladder type sections than down them! :O