Brigitte Lin back in the limelight! 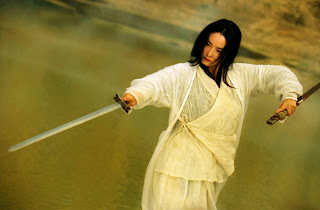 My favorite actress of all time in a scene
from one of my favorite films of all time
Despite the "very hot weather" warning in effect these past few days, I've had one of those active weekends which saw me do such as viewing two movies at the Hong Kong Film Archive and also going on a 5 hour hike earlier today. But even while much of what I did this past weekend was enjoyable enough, the fact of the matter is that an event I didn't attend is what actually has occupied my thoughts quite a bit.

Yesterday evening, Brigitte Lin Ching-Hsia was the featured speaker at an event at the Hong Kong Book Fair in the capacity of a new book author. Inside the Window, Outside the Window (whose title references her first film, Outside the Window) sounds like a memoir, if not autobiography -- I say "sounds like" because, unfortunately, it is written in Chinese, a language that I can only read a few characters of (including the three characters that make up Brigitte's Chinese name).

I didn't attend the event because, among other things, I had a schedule conflict and also because I didn't want to effectively just go and gawk at the woman once known in the Chinese-speaking world as "Wondrous Beauty". And in retrospect, it probably was a good thing I didn't attempt to go to it because, according to at least one news report, some 3,000 fans wishing be at that talk ended up filling three halls of the Hong Kong Convention and Exhibition Centre yesterday evening! Put another way: the event was way over-subscribed and two rooms had to be specially opened and the event broadcast into them!!

Instead, I partly satisfied my Brigitte "cravings" by re-watching her scenes in Ashes of Time Redux and the Q&A at the New York Film Festival for it that involved Wong Kar Wai, Christopher Doyle and Brigitte Lin (still available on Youtube here, here and here) also finally checking out Ashes of Time Redux's DVD's extras.

Watching her in Wong Kar Wai's desert epic, I was reminded once again of what a charismatic actress and powerful screen presence she is/was. From what he said (both at the Q&A and in one of the DVD's extras), it is clear how major a player she was in the Hong Kong cinema world back in the early 1990s. More specifically, Wong Kar Wai took pains to point out that Ashes of Time couldn't have been made without Brigitte Lin being in the cast -- because her being in the film was what made financial backers willing to put up money for the production.

Considering her status as an actress -- and her continued star power (as evidenced by her continued ability to attract crowds of fans), it is amazing to think that she so decisively walked away from the film world and last appeared in a film in 1994 -- 17 years ago now. (For the record, yes, I know that she narrated Bishonen and The Peony Pavilion... but that's not the same as acting in front of a camera!)

Something else that's really amazing to realize is in the intervening years, she appears to have effectively assumed the role of loving wife and mother -- and now also is on her way to becoming a bestselling author! All of which prompts me to think that Brian really was onto something when he wrote in the Actor Index of his Hong Kong Cinema: Views from the Brooklyn Bridge site that "Her life would make a hell of a movie."

And since Brian is really very eloquent when discussing The Great One (as he and I would refer to her in e-mails), here's going ahead and concluding this Brigitte entry by quoting him some more on her: "It's more than just presence -- it's more than whirling robes and shooting scarves -- it's more than painfully beautiful close-ups -- it's more than larger than life characters -- this woman is a great actress -- pure and simple -- and she can act the hell out of any role and reach out and grab the audience by the heart or by the throat." :)
Posted by YTSL at 11:03 PM

It seems strange but I can't recall the first time I saw Brigitte Lin in a movie, although I recall when watching "Boys Are Easy" thinking that she was doing commentary/parody on some of her gender bending roles so I must have seen at least one of her classic roles by then.

A surprise was her role in "Chunking Express" costumed in a trench coat, blond wig and in a postmodern inversion of how she and directors presented her, very dark glasses. I was and remain thrilled with her segment of that movie.

---------------
Sounds like you had a very busy weekend--and one that was a lot of fun. A profound bow in your direction for the FIVE HOUR hike in the heat and (especially) humidity of Asia's World City. I am feeling virtuous since I am about to start a mere four miles (flat ones at that) in the Motor City's slightly less disagreeable weather--dew point of 72.

I first encountered Brigitte Lin Ching Hsia in Taiwanese weepies that my mother adored and dragged me to as a kid. Many years later, I saw her in Hong Kong movies and it took a few of them before I realized that the Brigitte Lin in those works and the Lin Ching Hsia of those Taiwanese romances were one and the same -- so different were her different movie personae and so well did she inhabit all of them.

Re "Chungking Express": I love the "Do you like pineapple scene?" but wish I could see her eyes in that movie. Brigitte can be such a tease... and yet that's also part of her charm. :)

And yes, I did have a busy weekend. Re the five hour week -- it was at least one hour longer than planned but I think my hiking companion and I slowed down considerably in the circa 33 degrees Celsius heat. Fortunately, we both show no signs of heat stroke or anything of the sort some 24 hours pm. :)