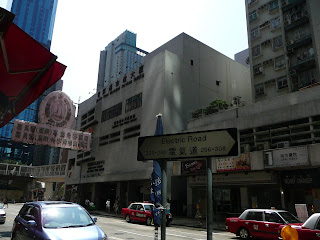 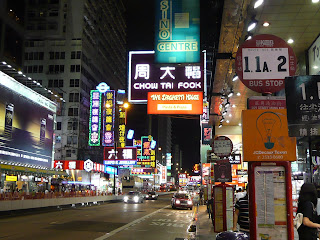 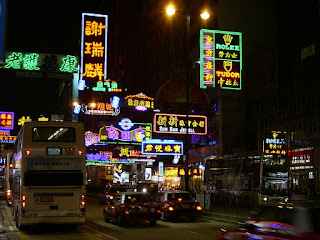 Electric Road is a road on Hong Kong Island that, compared to such as King's Road, which runs parallel to it (and has supplanted it as the main thoroughfare of the areas where they both pass through), doesn't come across as having a particularly electric atmosphere.

Named for a big Hong Kong Electric power plant erected in the area early in the last century, the road's western section these days is home to an eating area -- full of Japanese restaurants, Shanghai noodle eateries, Cantonese dessert shops and more -- that I frequently patronise and there are two skyscrapers on it, inside of which thousands of white collar workers are to be found during office hours. For the most part, however, it runs through areas that are more residential than commercial. So it's not a part of Asia's World City that many visitors -- besides those who lodge at the sprinkling of tourist hotels in the area -- venture into and see.

And, frankly, much of Electric Road really isn't all that photogenic even to my eyes -- which is why I feel obliged to include two photos of a more 'electric' looking Hong Kong road in this Photo Hunt: namely, Nathan Road, Kowloon's neon-filled major avenue. This even though after all is said and done, I actually have spent more time on Electric Road than Nathan Road since moving to this part of the world which I still continue to love and regularly feel excited by.

Great sequence and post for the theme. Happy weekend.

I love Nathan Road, the lights give the place a vibrance and energy!

what cool place to see! Great thought for the theme.

that is a great take on the theme. not having been to hk before, this is a very educational post too.

An excellent choice. I didn't know there was an Electric Road in Hong Kong (In London we have an Electric Avenue... there even was a song about it!) Happy weekend

wow the district looks alive, bustling with activities. i miss Hongkong and the food.

Nathan Road is a fave of mine:) Always colorful! Nice post. My ph is up too.

You're right: Electric Road isn't very appealing! Unlike the bright lights in the other shots.

My Electric photos are HERE

Have a wonderful Saturday.

Electric Road certainly looks a bit faded in comparison with the bright electric dazzles of Nathan Road captured in the next two photos!

Wow, what a lot of lights ! I don't know if Dodge exists in Belgium, honnestly I don't even know what it is ! Lol !

Very colorful! It reminds of a some photos I have that I should have posted from times square in new york. Oh well.

More city lights at night! But that's ok. Without electricity we would have to go to bed at sunset.

I am sure that there are lots of examples of neon signs in Hong Kong. I always associate that with HK.

Hong Kong Night shots are always my favourite shot. Great shot and have a nice weekend. CY From Thailand.
www.tangcyee.com

There's just something exciting and high energy about neon lights. Love your photos and visiting Hong Kong with you.

Thanks -- as for the weekend: well... some good, some not so good (namely my team losing in the English Premier League just a couple of hours or so ago :S)

Sounds like you may love Nathan Road more than me! ;b

Do you mean Electric Road or Nathan Road? (Get the feeling you mean the latter... ;b)

Wow, another overseas fan of Nathan Road! ;b

Glad you enjoy getting educated re Hong Kong. For my part, have to say I enjoy doing that via my Photo Hunt posts. :)

Didn't know there was an Electric Avenue in London! Whereabouts is it? (And bet you'd laugh if I told you that Electric Road is near Oil Street and Power Street here! ;b)

Strictly speaking, there are a couple of districts featured in the post. Both of them are good food-wise though... ;b

Goodness me -- another Nathan Road fan! (That makes three and counting...) ;O

Well, it's not appealing for the photographer but it's pretty good for foodies, actually! ;b

Thanks -- and well... Saturday's gone here. And have to say that I'm hoping for a better day this Sunday!

Oh, figured that was an advert for Dodge cars and trucks on your blog! ;D

Went and had a look at your blog... and guess you did go ahead and add those photos to your Electric entry! :D

Without electricity, there sure would be fewer things we could do at night for sure! :)

Yes, there are so many neon and other night lights that one common complaint here is of light pollution... :S

Thanks and actually, prefer day shots for the most part because I'm not as good a night as day photographer... :S

I know what you mean. And often artistic as well as bright too, don't you agree? :)

Yes-- when I think of Times Square, Shanghai, and Hong Kong, I think of ELECTRIC LIGHTS!

My Photo Hunters is up. I hope you have time to visit mine! New York Traveler.net

Perfect subject for the theme. I like the sequence also. It definitely is Electric!

I will admit I do prefer your neon lighting pictures, but I do find it interesting that the road is called Electric Road. It sounds odd to my ear, but possibly it isn't so odd in Chinese.

And I've just spotted Jams comment saying there is an Electric Avenue in London. I remember the song, but thought the name was made up. It still sounds odd. :)

ah yes, where could it not be more electric than here! Great shots.

you know due to HK series on tv i always thought of HK as a place where ppl rush to earn money or be left behind or worse still no longer belong to society. yr blog gives a more human face to HK.

Know what you mean re New York and Hong Kong but for Shanghai, I think more of The Bund. ;b

In retrospect, I wish I had shots of the eatery end of Electric Road to share. But I usually go there to eat and don't think to take photos during my visits there... :S

Actually, I think Electric Road was given its name by the colonial British... ;)

Heheh, and yes, Hong Kong is indeed one of the most live wire places I know. :b

I actually don't watch Hong Kong TV series ("only" movies). So find what you wrote about them to be interesting -- and, for the record, unlike many a movie I've seen as well as reality.

the street are so alive with all the lights on.

Just watched a documentary on Travel & Living Channel on HK last night (12/9) - have you ever been to a Pet Ashram on top of Victoria Peak...they teach you to talk to your pets!

very informative. lots and lots of lights, too!

Yes they are -- and I had an okay enough weekend but hope yours was better than mine!

Wow, comments from you at long last -- woo hoo! :D

No, haven't had any reason to go to the Pet Ashram, seeing as I have no pets. But yeah, stuff like that definitely has its believers in Hong Kong... ;b