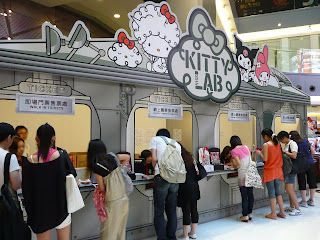 The Kitty Lab exhibition's ticketing office
(with nary a child -- only adults,
male as well as female -- in sight! ;b) 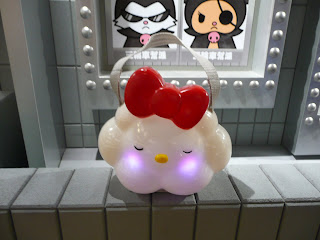 The enlarged electronic version of Kitty Chan's DNA
that visitors were given to lead them around
the exhibition's Hello Kitty-themed simulated city
Because sbk asked about it and I don't need much excuse to post about Hello Kitty... ;)

Two Saturdays ago, I spent close to two hours exploring the Kitty Lab exhibition that opened here in Hong Kong the Thursday before and will run through to August 30th. (And no, those two hours don't include the 45 minutes spent waiting in line to get in to the exhibition!) Set up as a participatory game that involves quite a bit of rushing from one point to another more than a conventional exhibition, the 35th anniversary project's story-line -- as much as I could get from a Kitty Lab "assistant"'s Cantonese explanation -- goes something like this:-

One day, an explosion occurred in Dr Kitty's lab that caused her head to look rather woolly -- or is it bubbly? (see the first photo above) -- and required her DNA and general physical being to be reconstituted. Visitors to Kitty Lab are tasked to help to get Dr/Hello Kitty looking more normal once more.

Duly provided with some Hello Kitty DNA (in electronic form (see the second photo above)), they are then sent on their way into a Hello Kitty-fied simulation city that comes complete with such establishments as Kitty College (where you record the characteristics of Hello Kitty's eyes), Mrs Ribbon Salon (where you choose which ribbon would best suit the cute cat) and Daniel Travel (where you virtually travel around the world -- I was sent to Africa! -- to get Kitty Chan's favorite accessories). Heck, there's even a Kitty Police Station, complete with a Kitty policewoman, where you can go to whenever you get lost or just plain confused or befuddled by it all!

And confused and befuddled I was quite a bit -- because, even for a fan of the furry feline like me, it really was a case of Hello Kitty as well as sensory overload at times. On a related note: one goes beyond feeling that the inner child gets let out in Kitty Lab; rather, I'd go so far as to say that I felt temporary infantilized during my time there.

Still, you know what? It actually was quite fun... for me and the multitude of Hello Kitty-philes -- male and female, old and young, but overwhelmingly East Asian! -- who were there that day (and, in all probability, also on the other days that the pretty unique exhibition's been open). And yes, I think it helped that no one was taking it completely seriously in addition to there having been a seriously cheery feel to the whole place and project. ;D

What an experience, what an adventure!! I am in awe and laughing-what more could a Hello Kitty fan want/need/desire?????

Thank you, thank you.

Well... I want the Kitty Lab-themed umbrella that was sold out by the time -- on the afternoon of just day #4 of the exhibition having been opened! -- I visited... ;(

On a cheerier note: yes, fun. Wish you were here to go with. It definitely would have been more fun with a Hello Kitty-phile friend!

lmao. You must've been in HK heaven for a few minutes during your lab project.

HK heaven = Hello Kitty as well as Hong Kong heaven? Either way, no way it was just a few minutes? ;D

What I find most impressive in this post is that you waited 45 minutes on line. The dedication of intelligent and thoughtful adult women (a description that fits all the Hello Kitty fans who I know) to this doll/brand is amazing. I hope that whoever came up with the idea is a zillionaire because he/she really tapped into the zeitgeitst.

Men, of course, will stand in line for 45 minutes (or much longer) to get a glimpse of their favorite professional athelete but women always seem smarter and able to use their time better than we men.

Forty-five minutes isn't too bad when you're expecting to wait and bring a book to read while you're in line... and for Kitty Lab, there were men (boyfriends, I'm thinking) who were waiting along with women.

Re Hello Kitty creators: alas, I'm not sure that Yuko Yamaguchi's even a millionaire but the company she worked for, Sanrio, sure have raked in millions, if not billions!

Interesting! I'm considering visiting the Singapore version and wondering if I should bring the hubby!
After reading your post, I think I should!

Hope the Singaporean version of Kitty Lab is as big and fun as the Hong Kong one! And if not your hubby, bring someone -- I think it really is more fun having someone to run around the fantasy land with! So much so that I ended up temporarily teaming up with a stranger (but fellow Hello Kitty admirer) for part of the time that I was there. :b