I hiked some 20 kilometers from Shek Pik Reservoir to Tai O back in February 22. (And, for the record: yes, it's the longest hike I've embarked on in Hong Kong to date.) A lot has happened since then. And a lot has happened as well since I put up my second photo-essay of that hike just a little over two weeks ago. But, finally, here's the third -- but not yet final! -- photo-essay chronicling that hike; one which effectively chronicles part of the route, albeit in reverse, that makes up Stage 7 of the Lantau Trail (which, more than incidentally, is relatively flat yet listed as "very difficult"!):- 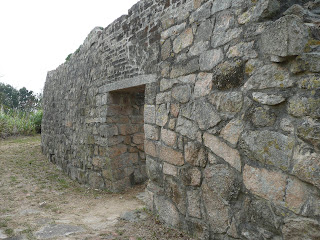 Before anything else: here's another look at
part of what remains of Fan Lau Fort 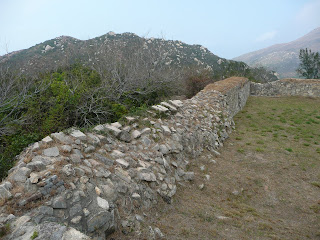 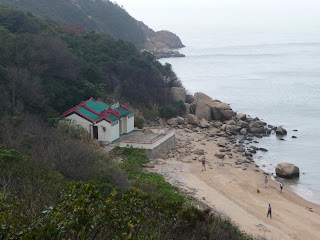 The Fan Lau Peninsula also is home to
a Tin Hau temple -- one, alas, that we didn't visit
but, instead, only saw from up hill 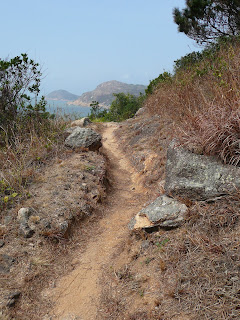 This is Hong Kong? Yes, indeedy --
its southwestern corner, to be exact! 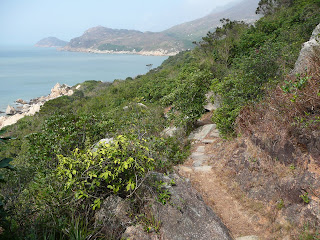 I wasn't kidding when I said that the air cleared
and things got brighter and more beautiful
as we went along the hike that day! :) 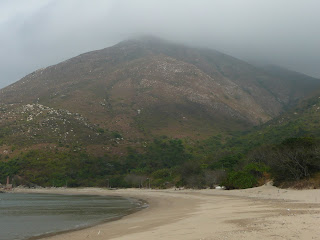 The last of that day's mist lying over a hill top 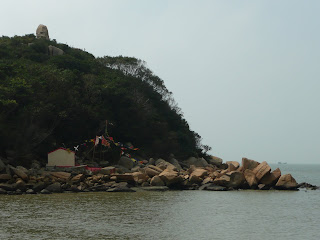 A shrine in Fan Lau Sai Wan that is far more
approachable from the sea than land -- and which
I suspect was established, and remains
largely patronized, by local fisher folk 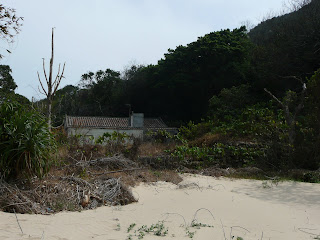 Even in this remote part of Hong Kong, there are
signs of civilization and continued inhabitation
To be continued -- at least once more!
Posted by YTSL at 11:20 PM

The sky looked surprisingly blue in that one shot. How was the air quality on this hike?

I just walked around the block at lunch in preparation for my trip.

I really love that fort! I think I'd make the hike just for that alone. Of course, the stunning views are also persuasive. ;)

Glenn, there is plenty of air-con in Hong Kong. In fact, don't forget to bring a sweater, since the movie theaters are often quite freezing.

"The sky looked surprisingly blue in that one shot. How was the air quality on this hike?"

It varied... Early on, like I stated in my "From Shek Pik Reservoir to Tai O, Part I" entry, there was too much mist (fog? pollution?) but it cleared up the further into the hike we went.

Re your other comments: er... if you don't mind my asking, are you planning to not move about much and/or stay indoors a lot on your visit to Hong Kong??!!

Fan Lau fort is nice indeed. There's another one on Tung Lung Chau but it's not so well maintained. Also another in Tung Chung which I've yet to visit... :)

I've been to several Tin Hau temples in urban Hong Kong and think it would be fun to visit the rural ones. Also I enjoy your photos of local shirnes.

Apropos of your comments: two Sundays ago, I walked from the mini bus stop above Clear Water Bay beach to Joss House Bay to see Hong Kong's oldest Tin Hau Temple. Have pictures of that temple -- and scenic walk. Will put them up on the blog some time but brace yourself... as the temple turned out to be under renovation when I visited!!!

the sand in the last picture - I can feel it running through my fingers! :)

Did you do all this hike in one day?

Get the feeling that if you did this hike, you'd want to linger on at least one of the beaches for longer than my group did...