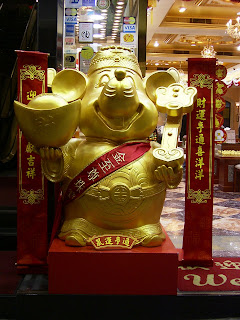 I'm not sure if tnchick was aware of it when she assembled this year's Photo Hunt theme list but we're currently in the zodiac year of the rat (or mouse -- there is no difference between these squeaky creatures in the Chinese language) according to the Chinese calendar. So, early this year, all around places like Hong Kong could be seen decorative versions of the squeaky creatures like the large as well as smiley representative in the photo above!

Incidentally, although I'm not putting up any pictures of him, it's hard to think of smiley rodents without also thinking of Mickey Mouse. But while Hong Kong does have a Disneyland, I absolutely don't have any plans to visit it any time soon -- not because I'm anti-Disney per se but, rather, in view of my having already been to the sprawling Walt Disney World in Florida and original Disneyland in Anaheim, I can't see how I'd get much out of visiting what is the world's smallest as well as youngest Disneyland along with, from pretty much all accounts, the most over-crowded and badly managed too... :S

I think it's the year of the photographer!

Oh yes it's a good choice for this week's theme. Mine is up also. Happy weekend.

That is a good choice for "squeaky"!

I can't identify what the mouse/rat is holding. Can you clue me in?

Squeaky rats.. :P Just what I had posted up too :)

I am myself, a Rat.
Squeak!

Hear, hear re Chinese New Year being on the early side in 2009. Hope Mr Ox brings better fortunes for people than Mr Rat!

It *does* seem like there are quite a few photographers and fine photographs about, doesn't it? ;b

The mouse/rat is holding a gold ingot in one hand (and, I'd imagine, something equally valuable in the other). This way, he's symbolising/wishing people wealth (and happiness) for the year. :)

Cats are not rats!!! :DDDDD

Thanks for the visit. Too bad I can't see your photo!! I don't know what causes it, it just happens sometimes!! The one in the post below I CAN see!!
I had to Google the spotted dick, I had never heard of it. You're right, that IS a very funny name too!

I wonder when it will be the year of the "goat" ? I am one, lol ! I am sure my cats would have prefered a rat !

Lovely shot and a great idea. Well done! I had trouble with this week's, but everyone I've visited has done so well.

That is so cool! What will the next year be? Great photo :)

I was born in a Rat year (1960), but I didn't even think about that as a possible entry. Nice capture on this one -- I actually thought that was Mickey in the photo when I first saw it.

Lovely photo for the squeaky theme. Didn't know it was the zodiac year of the rat and that decorative versions could be seen everywhere round HK. It must have looked very nice seeing such statues everywhere.

So sorry to learn that you can't see the photo on this post. Is anyone else having problems?? Judging from the comments, am thinking not...

Agreed re everyone I've visited looking to have done well. Pity though that there seem to be fewer entries than usual. Still, I guess it's understandable given the time of the year, etc.

Hmmm... maybe Mickey influenced the creator of this other mouse/rodent! ;b

It can be quite fun seeing different artists and designers' takes on the rat/mouse. Many of these were cute... wonder whether it'll be possible to make an ox (next year's creature) look cute! ;b

Great choice for The Hunt. Like your picture alot. I thought that "squeaky" was a tough theme.

Interesting post!
We visited Disney World many years ago, and the children enjoyed it. That was our first and last trip, tho.

The squeaky mouse/rat in your picture doesn't look too dissimilar to Mickey Mouse, but I suppose a smiling mouse will always do that.

Good Mr Rat! At least this one looks friendly. : )
Thanks for stopping by my blog too.
Happy New Year!

i'm looking forward to getting rid of Mr. Rat. i hope the Year of Ox would be better for everybody.:D

That is still kind of cute! Thanks for stopping by mine, hope you took a bite out of one of those mice! lol
Have a happy new year

That was perfect timing. I totally forgot about Mickey Mouse. Thanks for stopping by to comment on the squeakies at my place. Blessings!

Excellent choice for the Photohunt today! I grew up near Anaheim so have been to Disneyland many times as a child!

I've forgotten it was the year of the rat, it seem to be the perfect choice for the last photohunt of the year

I thought it the rat looked a bit like mickey mouse, maybe because it's standing up and smiling

happy new year to you!

Wow... another rat! Seems like there are quite a few among the Photo Hunters! ;b

Thanks for liking my choice. Strange as it may seem, didn't find this week's Photo Hunt theme hard at all!

Am the same as you in terms of having visited Walt Disney World just once. Am not sure whether I'll return; but this being said, did have a good time while there.

Odd how it is that quite a few people see the resemblance to Mickey as I didn't at all!

Here's sending an early new year wish to you too! :)

Have been reading predictions for the Year of the Ox. Sounds like we should brace ourselves for a not too great start for the year but that things will get better later.

Wish I could have had a bite (or more) of your mice. As it was, just admired them from afar... ;b

Actually, from what I've been told, mice (and rats?) love peanut butter more than cheese! ;D

Indeed re the perfect timing. Wonder whether there'll be a Photo Hunt next year where I can incorporate oxen... ;b

Wow re growing up near Anaheim: was that fun or just plain surreal?!

Happy New Year to you too and hope that on your blog, you meant that you were participating in your last Photo Hunt of 2008 rather than period!

sorry to drop in so late, but this is a perfectly golden take on the theme.

Better late than never and teehee re your comment re the my choice of photo subject! ;b

HK Disneyland is badly-managed? You mean the park isn't treated with kid gloves like the ones in Tokyo or Anaheim or Orlando? That's sad to hear. Not that I'd ever visit the HK park.

I haven't been there, so am only reporting what I've read/heard: the gist of it is that Hong Kong Disneyland is too small and filled with people (Mainland Chinese tourists) for it to be handled properly... :S