Up until the last couple of months or so, I was thinking that 2008 truly was shaping up to be the worst year in memory for Hong Kong cinema. But then came -- in rapid succession -- Ballistic, Beast Stalker, True Women for Sale and Ip Man. All films that have quite a bit to recommend, I have to admit that in the case of the first three, quite a bit of pleasure additionally was derived from spotting locations (and events) that feature in the movies that I've become familiar with over the course of the more than one and half years that I've been a resident in Hong Kong.

To this end, here's providing those who check out this photo-essay with a few places to notice in advance of your viewings of at least one of these Hong Kong movies... and also photos of yet other places people might recognize -- or have film associations with -- from watching still other Hong Kong cinematic offerings... (And to emphasize how surreal a movie fan's life can be in Hong Kong, here's confirming that the majority of these photos were taken prior to my watching the movies with which they now have associations to me...) 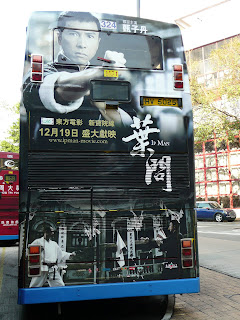 ...but first, one example of
Hong Kong movie advertising with the help of a bus! ;) 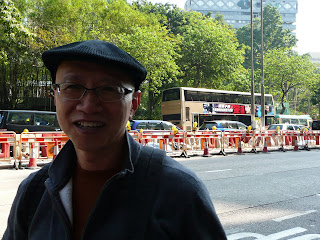 Also, here's Lawrence Lau (AKA Lawrence Ah Mon)
and, in the background, a passing bus
advertising Ballistic -- the third film he directed this year! 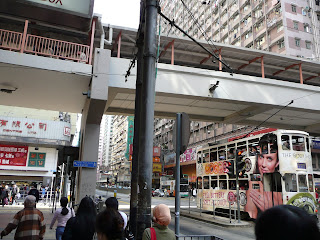 That overhead bridge might not look like much
but, in the future, some Hong Kong movie buffs might
make pilgrimages to walk on it in emulation of
Nicholas Tse and Nick Cheung doing so in Beast Stalker! ;) 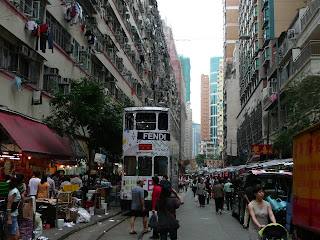 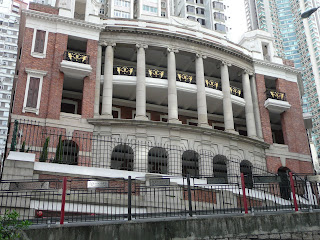 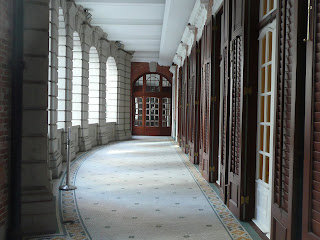 But, as can be seen in a scene where its leading female
stands on this balcony and at least one other,
it's supposed to house lawyers' offices in Beast Stalker 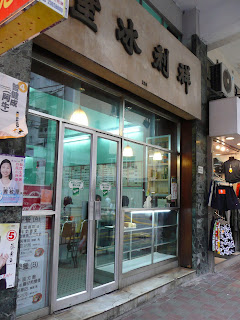 Remember the eaterie that Simon Yam and co would
regularly go and eat in Sparrow? If so, doesn't
this modest Electric Road establishment look familiar? ;) 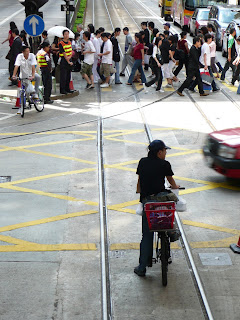 Alternatively, sorry, Glenn, but the likelihood of spotting
Simon Yam bicycling around Hong Kong is slim ...
instead, the cyclists I see around (who invariably are on
food delivery errands) are more likely to bring to mind
Leon Lai in Comrades, Almost a Love Story
and Anjo Leung in Magic Boy for this filmophile ;)

Great post. I admit that I have lowered my expectations for Ip Man based on Flashpoint and SPL and Empress and Painted Skin; it seems like Donnie is either miscast or he lets it become the Donnie Yen Show for 90 minutes. So Ip Man is good, I take it?

Is that Sun Yat-Sen Museum also in Sparrow? It looks familiar from the scenes where we saw Kelly Lin's "sugar daddy."

And sorry to hear there is no Simon Yam on his bicycle but the other examples you cited are quite good as well.

I guess I was lucky; when I first saw Comrades years ago I didn't really know who Leon was and I'm sure now I'd be distracted by the aburdity of a star like him delivering food -- to say nothing of the absurdity of Maggie working in a McDonald's!

Ip Man was good! I really enjoyed the show. I learned wushu before and I thought the fighting movement and reaction look so real. I can see Donnie really practiced a lot on his Wing Chun. It's not simple to do that very fast punching movement. Salute!

Very nice. You are much better at spotting movie related locations than I am but they always get me excited when I do (or more likely when someone like you points them out). Still recall how cool I thought it was when you told me this was the place in A HERO NEVER DIES where Fiona gets shot.

Re "Ip Man": The characters are on the one-dimensional side but the action makes up for it. It seriously is adrenaline-pumpingly great! All in all, I think it helps that Donnie Yen is NOT the film's choreographer, "only" its star.

As for the Sun Yat-sen Museum in "Sparrow": I have to say, it's been a while since I saw that movie, so can't remember. Sorry!

And re the absurdity of Leon delivering food, acting like a "nobody": See... he CAN act! :b

Glad you (and your husband (who I highly recommended it to), presumably) went and watched and enjoyed "Ip Man". :)

The funny thing for me these days is how I spot locations I'm familiar with in movies -- rather than before, when it was more usually the case that I would go by a place and then realize "oooo, it's been in X (or Y) movie!" All the same, yes, this kind of thing gets me excited too -- STILL! :)

Oh... and have to point out that it was Tim Youngs who pointed out the "A Hero Never Dies" place to you (and me) as we walked through TST after having dinner at the "Dog Bite Dog" restaurant... ;b

I am so jealous...I think my favorite movie ads are on the buses. They look so cool.

Glenn, Hehe, I think ytsl would have fallen off the tram or bridge (where ever she took the photo from) if she saw Simon Yam on his bicycle.

ytsl, am I projecting....I know I would have fallen and probably landed on top of him and crushed him...

I must say I'm happy to see ads for Hong Kong movies on buses again. For a while, it looked like it was a dying practice -- what with so few Hong Kong movies getting released in cinemas. (The Beijing Olympics has that to answer for, I feel...)

And yeah, I think you're projecting: Because I like Simon but... actually, I'm usually very bad at noticing people -- already, I've almost bumped into Hui Siu Hung and Donald Tsang without noticing who they were (and worse, I've momentarily mistaken Kara Hui Ying Hung and Crystal Tin for ushers/ticket collectors at premieres!)! So I'm not sure I'd have noticed that it was him biking along! ;D

Wait. You *have* to do a post on mistaking Kara Hui for an usher!

That is very funny!

Is that some sort of comment on her career as a whole?

My Young Auntie was one of the first Shaw reissues I bought and I really enjoyed it even though it was quite a bit different than many of the other martial arts films that I'd seen before.

Hmmm, I'll think about your request. To be honest, didn't think (many) people would be that interested -- but, then, I've been happily surprised by the comments that this photo-essay has attracted! :)

And my first instinct was to say: no, it's not a comment on her career. But thinking some more, I guess this kind of came about because she's a supporting actress rather than a star these days -- so that I go to film premieres not expecting to see her there.

Yeah, Heroes of the East is good.

In this area, it's quite easy to find these bootlegs of the Celestial Shaw DVDs that look like the real thing until you open them and find out they are not and they have no extras, etc.

But, I was in a secondhand store a few years ago and actually found a used R3 Celestial DVD Heroes of the East which was a bit weird to see in a US store for only $6.

The prevalence of bootlegs is something I should probably blog on -- usually bootlegs of Region 3 stuff that has never come out here in the first place, so no one knows that the DVDs are really boots.

I derailed these comments again, I think!

Given your passion on the subject -- yes, I think it'd be good for you to blog about (the prevalence of) Celestial Shaw DVD bootlegs where you are! ;b

Also, if you're wondering: there are bootlegs around in Hong Kong too but, as I was reminded while walking around a mall in Penang earlier today (I'm back for a brief visit), the situation is far, far worse in places like Malaysia. :S

No matter which HK film I watch with oodles of location shots, I just would like to be there, anywhere, in HK. heehee. I plan to watch Ip Man.

I actually have a lot of favorite Hong Kong movies that aren't supposed to/don't take place in Hong Kong (e.g., "Peking Opera Blues", "Swordsman II", "Dragon Inn"). OTOH, nothing quite beats the feeling of watching a (good) Hong Kong movie set in Hong Kong, recognising locations in the movie *and* coming out of the cinema knowing that you're *in* Hong Kong itself... :)