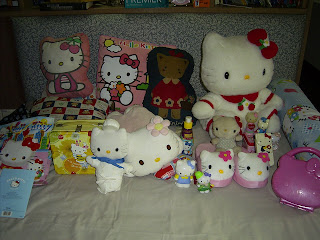 Part of my personal Sanrio collection ;)
Some days, you need -- not just like and seek -- a little whimsy. For my part, that's when I often turn to things Sanrio. This way, I get my requisite dose of kawaii (the Japanese word for cute) along with the whimsy.

For those who don't (yet) know: Sanrio is the Japanese mega-corporation established in 1960 by Shintaro Tsuji whose best-selling as well as most famous icon is the feline phenomenon known as Hello Kitty (but whose stable of kawaii characters also include Hello Kitty's tuff-haired boyfriend, Dear Daniel, and the now sadly -- at least to my mind, even if no one else's! -- discontinued Winki Pinki).

These days, however, it's increasingly unlikely that you're unfamiliar with Hello Kitty (who -- this fact is especially for those of you who are inclined to think that interest in the infamously "mouthless cat" is but a passing fad -- is now more than thirty-years old!). This may be especially true in territories like Japan, Hong Kong and Malaysia where Kitty-chan's visage is more ubiquitous than that of, say, Mickey Mouse. But when even American news sources like San Francisco's SF.Gate.com came to carry a piece on How Hello Kitty Came To Rule the World as far back as July 2004 and the Boston Globe had a similar feature entitled Kitty on top later that year...

...Anyways, all this is but a prelude to directing fans of Hello Kitty -- along with any interested parties -- to a fun blog which I recently discovered and have been unable to stop myself from regularly re-visiting; one that's entitled Hello Kitty Sightings but also covers choice sightings of many of the rest of the Sanrio gang. Enjoy? I know I do -- and sans any amount of guilt or embarassment for doing so too! :b

Gosh, I would never have pegged you as a Hello Kitty or Sanrio memorabilia collector. I have a few Hello Kitty's myself and I like Keroppi the most. I'm not a Sanrio toy collector though.

I used to collect action figures like StarWars and McFarlane toys but these days I'm more into Japanese figures and Stikfas. I have a pix of a portion of my small Japanese figures collection somewhere in my blog. I once took a course on making Gundam models the proper way too. Hmmm... maybe when I have a bit of time I'll put up pix of the Gundam model I made and other my other toys if you're interested.

Well, I wouldn't consider myself a Hello Kitty or Sanrio *memorabilia* collector. Also, if truth be told, most of my Sanrio items have been bought for me by others (but, yeah, I do love them just the same/maybe all the more for this being so!). :)

And hmmmm...you haven't gone and had a look at some of this blog's earlier entries, have you? For as early as entry number two, I had already admitted to having a Hello Kitty, etc. plush toy "weakness"! ;)

Hahaha... you got me there... I didn't really read your earlier entries. :D I did glance at them though. :P

Now which one would Winki be in your collection?

If there's one thing I know, it's that you can't always tell where lurks a Hello Kitty fan. Take my best friend Rally, for example. If you visited his apartment and he showed you his knife collection, talked about military history, and then made you watch his Hong Kong "girls-with-guns" clips video, you probably would never suspect that he has Hello Kitty decals plastered all over his white Honda Civic! But yes, he is an unrepentant Hello Kitty fan. That's why, one Christmas, I bought him a "devil" Hello Kitty plush in a red vinyl fetish suit. Yes... such things exist. The world is indeed a strange and wonderful place.

As for me, my favorite Sanrio character is Chococat. But I don't collect all things Chococat. The only thing kawaii that I come close to collecting are those cute little Winnie the Pooh figures in removable animal bodysuits. You can buy them for 4 quarters from vending machines all over San Francisco Chinatown. The latest series was aquatically themed. The two I want the most: Starfish Pooh and Jellyfish Pooh!

Keep on blogging, YTSL! You are always full of surprises.

Your Winki Pinki is great. And I can't decide which I like better of the Hello Kitty collectibles- the pink Kitty slippers or the fab pink plastic purse. Do you have more? Other pictures?

" Hahaha... you got me there... I didn't really read your earlier entries."

Well, what are you waiting for? Get thee to the older pages double quick! ;b

Winki's the brown -- and please don't think "dirty"! -- cat in the middle! Also, am not sure you can see this in the small picture but if you click on it to go to the enlarged photo, then you can note that I also have a Winki Pinki -- or, since it's actually a "pirated" version, Minkibinki! -- patterned cushion towards the left of the photo... ;)

Thanks for sharing re your best friend Rally and everything else! Also, thanks for the "keep on blogging" encouragement!! :)

I definitely have more Sanrio items (including -- I kid you not -- a Hello Kitty egg-shaped toothpick container which I was inspired to buy after seeing all the Hello Kitty eggs on sale in Hong Kong during Easter 2006!). No pictures of them as yet though but I'll try to remedy that sometime soon. :)

Yikes, this entry is causing me great collectible pain!!!

I've just spent an hour online looking at what I like- Totoro and McDull/McMug items.

My car could become a moving Totoro-seatbelt covers, gear shift and emergency brake covers, head rest covers and what looks to be a child's carseat cover-wait a minute, I don't have a child that age or a carseat for one!! Hey, I could buy a carseat for my bigger stuffed Totoro... no, this is too much collectible silliness...for today at least.....

Just you wait until you get to Japan: i.e., the land of kawaii, Hello Kitty and Totoro!!! ;b

I can understand your need to have some "kawaii" in your life. But through music in a language you can't comprehend? (Though it'd help me understand (more) if you were to tell me that you prefer Morning Musume music videos to their CDs!) ;S

YTSL, don't tell me that, as an anthropologist, you can't understand how someone can enjoy listening to music in a language that he/she can't comprehend! ;) My listening experience would be very impoverished if I limited it to the only language I can understand: English.

Leo86, since your "affection" for Morning Musume is strikingly similar to a certain someone on a certain discussion board, let me just say that, while I don't share you enthusiasm for the group, I consider it by no means abnormal, as many others seem to do. But who am I to talk? I have an equally "odd" habit of watching old Cantonese movies without English subtitles!

"YTSL, don't tell me that, as an anthropologist, you can't understand how someone can enjoy listening to music in a language that he/she can't comprehend! ;)"

At the risk of sounding like I'm spliting straws: I *can* understand how someone can enjoy listening to music in a language one can't comprehend (cf. my "In Praise of Tsai Chin" blog entry, for one!).

Instead, what I am trying to understand is how one can enjoy kawaii-ness in musical (or verbal) form rather than visually (since what often is kawaii verbally to some people just comes across as gratingly high-pitched to me!)... ;)

"I have an equally "odd" habit of watching old Cantonese movies without English subtitles!"

Must admit that I admire your ability to do this. Me -- maybe I have insufficient patience or something! ;(

Well, I'm not going to engage in a "kitty" fight over whether or not "one can enjoy kawaii-ness in musical (or verbal) form rather than visually". ;p

But I will publicly confess my own most extreme kawaii obsession. ;)

Here then is Mavis Fan in the beginning of her colorful and varied musical career.
www.youtube.com/watch?v=1vYbjpE73zE

I first saw Mavis in Private Eye Blues, without knowing anything about her, and then after seeing her again many years later in About Love, I became curious about her... and the next thing I know, she's one of my favorite singers. :)

Here is one of her latest videos:
www.youtube.com/watch?v=G6oMMHUiGW0

Thanks for opting against engaging in a kitty fight with me. Also, for bestowing on my blog the honor of being where you came out with your "own most extreme kawaii obsession"! ;b

I can assure you that Morning Musume's song performances are just as "kawaii" to the ear as they are to the eye. Here are some samples:

I don't know if these help, but they're the most easily quotable off the top of my head. :)

Thanks for taking the time to (attempt to) explain to me how Morning Musume's music -- not just music videos, etc. -- can be kawaii! Now, hmmmmm...maybe if I try to imagine these lyrics being sung by Hello Kitty or Totoro...and hey, come to think of it, I *do* find the Totoro theme song plus the other song that appears right at the beginning of "My Neighbor Totoro" to sound very cute indeed!!! ;D

Please do tell me were you bought the Hello Kitty in a vinyl suit from! I once found one on ebay but lost the bid coz I got late home to my pc :(

Sorry, I can't help. For one thing, I'm not sure that I have a Hello Kitty in a vinyl suit, actually! For another, a lot of my Hello Kitty items were gifts from friends and family members. (I'm not sure whether you've also had this experience but, at least for me, this is what happens when people know that you love Hello Kitty!)