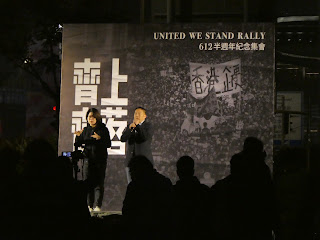 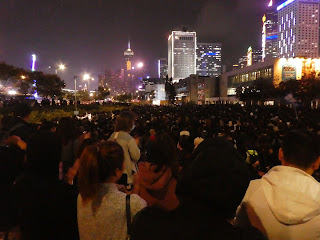 A pretty sizeable crowd was also in attendance at the rally 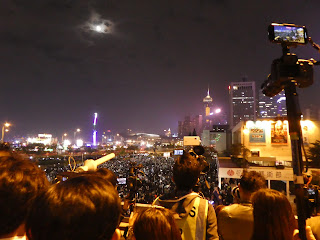 Under the moonlight and other bright lights
shining on Edinburgh Place this evening
A rally was held this evening in Central to mark the six month anniversary of June 12th: the first day this year that the police gave us a taste of the brutal and excessive ways that have made them so very hated and mistrusted by Hong Kongers.  (Little did we know then that so much worse was to come but even so, we were already appalled and horrified by what we saw that day.)
A reminder for those with short memories: Until that day, there was but just one major demand on the part of those people who have been protesting for more than six months now.  Put another way: Hong Kong would, in all likelihood, not have been plunged into as much of a crisis as it now has been if Carrie Lam had withdrawn the extradition bill before June 12th -- rather than on October 23rd, as was the case -- or even announced her intention to do so -- like she finally did on September 5th.  And if the Hong Kong police had not so brutally attacked protesters -- the vast majority of them unarmed -- with the now all too familiar tear gas, pepper spray, rubber bullets, beanbag rounds and batons on June 12th.
On the subject of anniversaries: Yesterday marked the fifth anniversary that the Occupy Hong Kong section of Admiralty was cleared for vehicles to go back to using it.  As it so happened, I was in Germany when this happened -- and when, on my return to Hong Kong a few days later, the Airport Express shuttle bus I was in went on the section of Harcourt Road where I had spent quite a bit of time in the preceding months, I felt more than a tinge of sorrow and sense of loss.
To be sure: in the following days, months and years, there would be defiant announcements of "We will be back".  Even so, many people felt for a time that the Umbrella Movement had died -- or, at the very least, that pro-democracy protesters had been badly defeated after the Occupy Hong Kong phase of the movement came to an end.
These days though, there are people who look at what's happening now as a continuation (or revival) of the Umbrella Movement; this particularly since genuine universal suffrage is indeed one of the five demands of the current protests.  At the same time though, there's a determination to learn some lessons from what ensued -- or, in some cases, failed to ensue -- five years ago, including tactically, to ensure that protesters will not walk away without a positive result in their favor this time around.
In general, there does seem to be quite a bit more analysis and reflection among protesters and their supporters this time around.  A case in point: a good deal of thought is currently being put into why Hong Kong has been relatively quiet in recent weeks; with one line of thinking being that the government had decided to de-escalate the police violence, expecting that the pro-Beijingers would win big at the District Council Elections, and couldn't proceed with a Plan B after that turned out to not be the case -- because, well, they had no Plan B as per usual!

Returning to the subject of this evening's rally: it was organized by Ventus Lau, who's probably organized more protest events in the past five months (including the very first protest march Kowloon had seen in decades, maybe ever, back on July 7th) than he had the previous five years!  Other speakers at the event, all of whom the protests have turned into household names, included Wu Chi-wai (who demonstrated admirable courage under fire on June 12th), Roy Kwong (aka Kwong God),  and Civil Human Rights Front convenor (and newly elected District Counillor) Jimmy Sham -- whose speech included a "See you on January 1st" line that will have protesters marking that date in their diaries.
In summary: even as we look back, we also are continuing to look ahead.  For not only is there a sense that the current protest movement still has a lot of life and fight left in it but, also, that Hong Kong's struggle for democracy is going to be one that requires planning and patience.
Posted by YTSL at 11:59 PM