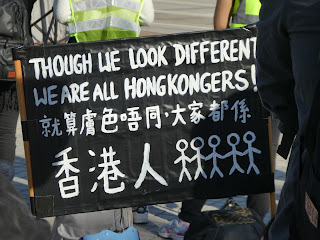 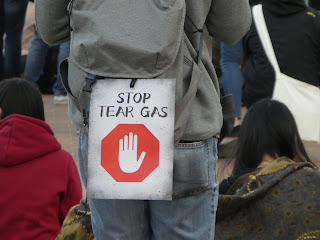 Another sign on display at the rally for Yuli


Protests took place at various shopping malls in different parts of Hong Kong yesterday, including Sha Tin's New Town Plaza (of July 14th infamy).  After the riot police rushed in, people were pepper sprayed and arrested at Telford Plaza in Kowloon Bay.  In addition to pepper spraying and arresting people inside New Town Plaza, the police also shot tear gas close enough to it for clouds of the chemicals to seep into the mall.


Before yesterday, the Hong Kong police had not fired any cannisters of tear gas at people since the first of the month (i.e., two weekends ago).  Amazingly, no tear gas was fired on December 8th, the day of the first mega protest march that took place after the historic November 24th District Council Election triumph for the pro-democracy camp.


The fear is that now they've resorted to creating tear gas buffets once more, the police will once again find it hard to resist using this weapon once again despite the concerns, for good reason, of a good chunk of the populace with regards to its use.  And, as it so happened, the police did go ahead and fire more tear gas before yesterday came to an end -- notably in Mongkok, where one tear gas cannister caused further injury upon reportedly hitting a student reporter near his right eye.


Adding to the long-standing tear gas problems yesterday was the observation that certain shopping malls appear to have followed the example of the MTR and universities, and taken to hiring ethnic minorities as security personnel.  While it may seem a good thing that they are giving work to ethnic minorities, their reasons for doing so appear to be less than benign -- and has the potential to destroy the goodwill between different ethnic groups that has been generated amidst the pro-democracy protests by way of many native Cantonese speakers belatedly realizing that there are a number of individuals from ethnic minority groups who consider themselves Hong Kongers too and have taken part in the protests.

Ending this post on a less kumbaya note: Another police misdeed that reared its head again yesterday involved the framing of protestors by doing such as planting "evidence" on or by them.  The most visible example yesterday involved a man who's presumably a pro-police/Beijing sympathizer, at the very least, pushing a hammer-type tool towards an arrested protester -- and a police officer using his foot to get the object closer to the arrested individual.

Hopefully, the man who they tried to frame will have charges dropped against him; especially since there is pretty clear video evidence showing the police officer and his friend's sneaky attempt to unjustly get the protestor into major trouble.  (And thank goodness for so many people in Hong Kong being willing to record and bring to light police misdeeds!)
Posted by YTSL at 11:56 PM

As long as I have been a live our small town has never had protest. A few Marches and back in early 80 a strike.
Coffee is on

There's a book on Hong Kong (by Antony Dapiran) which refers to it as the City of Protests. One reason for this is because Hong Kong is this rare territory where the people can't vote for their leader and a good part of their government but are supposed to be guaranteed freedom of speech, assembly, movement, etc. So since people can't vote governments or officials they can't stand out of office but can at least voice their dissent against them, they protest!