Two days with more protests but no violence 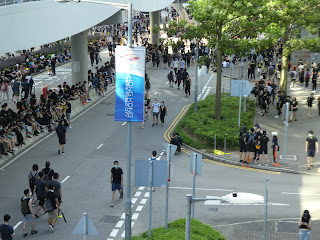 "Asia's world city" has featured quite a bit in the
international news this summer... 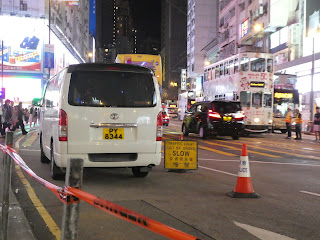 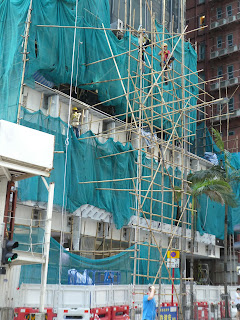 Actually, though, many people and things are working
much as usual amidst all the political turbulence!


Despite my hoping otherwise, Tuesday ended up being the fourth consecutive day beginning from last Saturday that saw the police firing tear gas at civilians.  Instead, I -- and the rest of Hong Kong -- had to wait until yesterday to enjoy a blessedly tear gas-less day; and this despite not one but three protest events having taken place over the course of the day.


First up was a silent march by an estimated 3,000 strong group of lawyers and other legal professionals to demonstrate their discontent at the political persecution of anti-government protesters; their second pertaining to the extradition bill saga (with the first having taken place back on June 6th).  There also was a rally held at Hong Kong Baptist University in support of the student leader arrested on Tuesday night for being in possession of laser pens the police had deemed to be offensive weapons.


There also was a protest in Tsim Sha Tsui over that arrest which turned out to be a light show of sorts and overall good humored occasion -- one which an attendee Tweeted "was something we all needed: no tears, no blood, just laughter, song, and dance"!  The fact that it took place at the same time as the much vaunted -- but, to my mind, rather cheesy -- A Symphony of Lights that many visitors to Hong Kong think is a "must see" made it even funnier to my mind!


More than incidentally, that touristy light show is still being staged daily.  And, as one may gather upon realizing that, much of Hong Kong remains functioning and operational despite the protests and after the conclusion of the tumultuous day of strikes -- and, as it turned out, clashes in various parts of the territory -- that Monday turned out to be.


All this not withstanding, some 20 countries have seen fit to issue travel advisories for Hong Kong: with Australia having done so yesterday; and the USA doing so today.  But even while the regular police over-reaction to the protests (which are now about more than just the extradition bill but still have its withdrawal as a key demand) -- along with their delayed or just not getting to the scene at other times -- have most definitely made Hong Kong a less peaceful and safe place than it usually is, I have to say that I still feel far safer in Hong Kong than every other part of the world I've lived in, including Philadelphia.


I've been told that the City of Brotherly Love is a safer place these days but when I lived in what many of us thought would be more accurately described as the City of Brotherly Shove, it had the highest car-jacking rate of any American city, it wasn't uncommon to hear gun shots at night and I regularly saw crack vials on the corners of streets that I walked on.  And while I managed to escape being mugged, a friend -- who was a former army officer and thus one of those guys who prided himself on being able to look after himself -- got mugged while walking back late one night to his apartment just a few blocks away from my abode!

Getting back to Hong Kong in the present: I understand if people -- especially those who have never been to this part of the world -- have concerns about visiting at this time.  But here's sharing that a Montreal-based British friend of mine was in town for a few days recently and, after once again having had a good time eating lots of dim sum (including on one occasion with me), going out to bars (including, again, on one occasion with me!) and doing things he enjoyed, told me he's hoping to return to visit again before too long.

In addition, while the protests are still on-going, it's worth noting that many of them are peaceful.  For example, this evening saw a march to protest the extradition bill by Catholics that was followed by a prayer meeting.  And for those who still haven't realized it: yes, Hong Kong protesters are a diverse lot -- and often really aren't that scary! ;b
Posted by YTSL at 11:36 PM