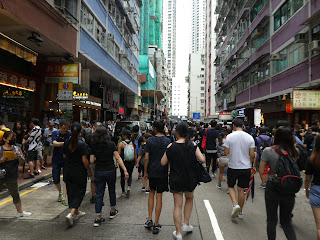 Something I saw for the first time ever today: Electric Road
in Tin Hau closed off to traffic ahead of a protest in Victoria Park 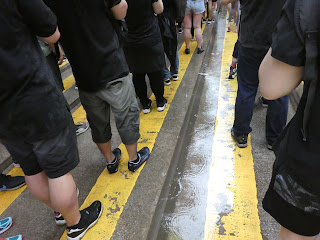 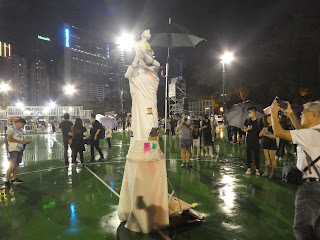 Even after today's protests officially drew to a close at 9.15pm,
there were still people in Victoria Park -- including those intent
on taking photos of the Goddess of Democracy with extra accessories

Earlier this week, a Hong Konger friend of mine -- who has a number of pro-police (though not necessarily, pro-Beijing, she pointed out) family members -- asked me if I thought that the current protest movement would die out in view of what had happened on Tuesday at Hong Kong International Airport.  I opined that this might have been so if those who had been there had not expressed remorse but the fact that an apology had been issued had helped matters and this especially after it was accompanied by self-reflection and the heeding of calls for more moderate ways of protesting to be attempted once more.

In any case, I figured that we would find out before the end of the week how much support the protests -- which have morphed from a single issue anti-extradition bill protest to a multi-issue one with five official demands -- (still) have since a number of protests were planned for this weekend beginning on Friday evening, with the "Stand with Hong Kong; Power to the People" rally in Chater Garden that had so many participants that some of them ended up temporarily "occupying" neighboring roads.

One day later, a teachers' demonstration against the anti-extradition bill in the morning attracted a larger crowd than expected despite thunderstorms and heavy rain while a protest march that went from To Kwa Wan to Hung Hom and beyond also attracted thousands despite bad weather; prompting writer Louisa Lim to Tweet a photo of a veritable sea of protesters, accompanied by the words "Whoever thought the government could just wait this out and sentiment would die down might want to reconsider that strategy"!

And then came today.  A pro-democracy rally organized by the Civil Human Rights Front attracted far more participants than could get into Victoria Park, with the result that many people never made it into the official event venue and, instead, ended up flowing onto and along nearby roads and streets as far east as North Point and as far west as Sheung Wan!  Some will dispute the organizer estimate of the crowd size hitting 1.7 million (including the police, whose estimated numbers are a far lower 128,000 at the peak of the rally) but I personally can vouch for the lines to get into Victoria Park stretching as far west as Wan Chai some four hours after the official start time of the event!

What makes the size of today's protest all the more amazing is that: for one thing, it took place some 70 days after the anti-extradition bill protest march organized by the same organization on June 9th which attracted some one million participants; and for another, a good part of today's protests took place in pouring rain!  Even more remarkable for many may well be that this weekend will be the first in weeks to be tear gas free -- though as quite a few protesters could be heard joking today, it undoubtedly helped that all the rain this weekend made it so that the police couldn't use tear gas on people even if they had wanted to! ;(
Posted by YTSL at 11:59 PM