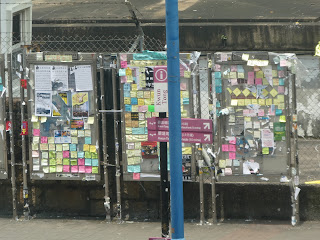 A Lennon Wall in a corner of Kwun Tong (which,
years ago, I was told was a pro-Beijing stronghold) 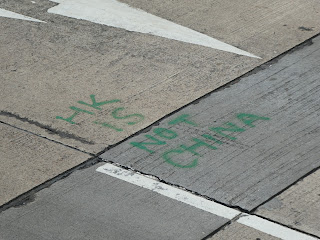 
With at least one live round having been fired from a police officer's gun along with the introduction of water cannons to the range of weapons that the police have now used on protesters continuing to seek the withdrawal of the extradition bill among their five stated demands, yesterday saw the further escalation of violence in this long and hot summer of protest in Hong Kong.  Like on Saturday, the protests actually began with a permitted protest march -- albeit this time around, from Kwai Fong to Tsuen Wan.  But, as with Saturday's protests, clashes ended up taking place between protesters and the police well into the night.


Among the things that have upset me (and many other like-minded Hong Kongers) is that the clashes have become almost too inevitable -- which is why the previous peaceful -- even while protest-filled -- weekend had been so very much welcome.  As the weeks of protest have gone by, it seems that some protesters have taken to trying to pre-emptively protect their fellows from police assault and arrest by blocking roads and such near a march routes.  And while the police's reactions have often been officially explained as their seeking to clear the roads and associated protest areas, it's often looking more like they are more intent on sowing panic and arresting protesters than actually effecting effective crowd dispersal.

Author Kong Tsung-gan has been keeping a tally of protesters on the days of the major protests this summer -- and it's currently at 575 since June 9th.  Among the 29 people arrested on Saturday was march organizer Ventus Lau -- who was moving supplies (such as loudspeakers and banners) off the march route along with his team when he was apprehended by the police!  And among the 36 people arrested yesterday was a 12-year-old boy -- a sure sign of how crazy things have become here along with how widespread the protests now are.


Further evidence of how nuts it all can be is that, along with molotov cocktails being thrown at the police to try to slow down their pursuit of protesters, rubber ducks were also hurled at the cops yesterday.  I'm guessing that those rubber ducks (which also had made their appearance in Yuen Long on August 21st) were used to symbolically show protesters' awareness of how disproportionate in strength are the weaponry they have at their disposal vis a vis the police.

At the same time though, it's quite amazing how unlikely are some of the equipment that have been effectively used to deal with tear gas fired here in Hong Kong.  Outgunned the protesters may be but out-witted they are not.  (Hence, among other things, their not falling into a trap yesterday as I had feared they would be -- especially after news came of the MTR once more having closed stations near the march route hours before its start.)
Posted by YTSL at 11:59 PM