An anti-extradition bill protest was scheduled to take place in Mongkok yesterday, with a route that would take participants only over to neighboring Tai Kok Tsui.  Rather than conforming to the restrictions set by the police, the protests ended up spilling over to Tsim Sha Tsui, Jordan and Yau Ma Tei.  Protesters ended up temporarily shutting down the Cross Harbour Tunnel twice over the course of a few hours.  But the biggest news of the day for sure had to be angry Wong Tai Sin residents getting riot police who had descended on their neighborhood late at night to retreat after they fired tear gas in the mainly residential area named after a popular local god.

Shortly before I began writing this blog, more tear gas was fired by the police -- this time in Causeway Bay over on Hong Kong Island and, earlier, over in Western after protests overflowed to those areas from a rally restricted to Belcher Bay Park, whose size and design really is not suited to hosting a lot of people, never mind protest participants.  For a brief period today, the Cross Harbour Tunnel was shut down once again too.

In between the Mongkok and Belcher Bay Park events, there had been a protest march in the New Territories New Town of Tseung Kwan O.  Later in the day, there were altercations there between the police and protesters -- but no tear gas fired (as yet).  During the couple of hours or so in the afternoon that I had marched along the proscribed route with a couple of friends and thousands of fellow protesters though, it was pretty peaceful -- and a family affair for many even.  I wish that more Hong Kong protests could be as tension-free as this protest whose flavor I hope the following photos can give a good idea of.  But, then, I also do wish that peaceful Hong Kong protests could bear more fruit... 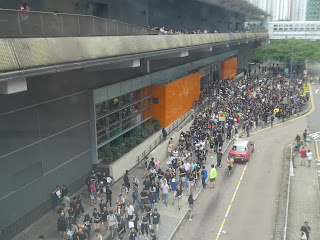 I got an inkling that the Tseung Kwan O march would be
well attended on the train there, and confirmation of it after
seeing this sight at the train station closest to the march start 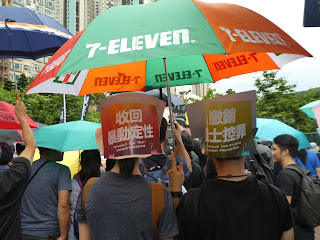 An unusual way to send out messages (and I don't mean
via the advertisement on the umbrella)! 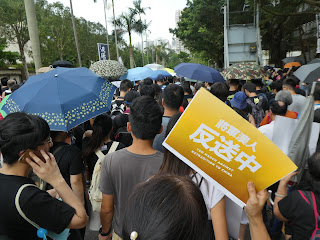 The crowd was thick but we made good time, unimpeded
by the police (who were pretty much non-existent in the area)
and few physical obstacles along the route 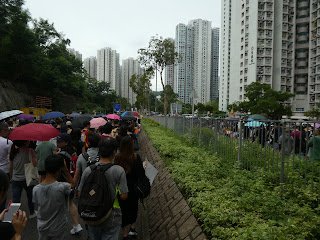 On many roads, the march participants took up
all the lanes and even the pavements 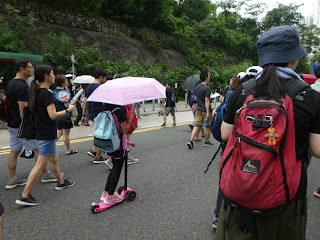 I'm guessing this kid agreed to go on the protest march with her mother
after she was told that she transport herself along the route by scooter! 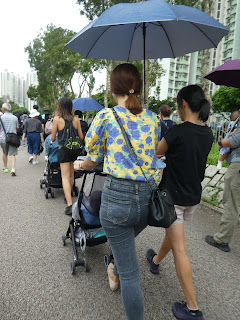 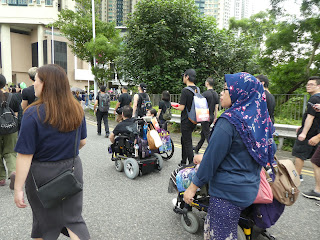 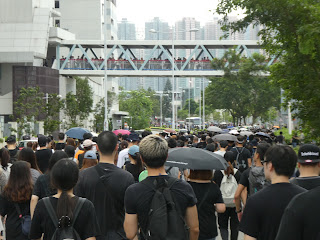 Toward's march end at a velodrome near a shopping mall,
many residences and -- most usefully for me! -- an MTR station
Posted by YTSL at 10:36 PM