The largely peaceful day after a tear gas-filled long weekend 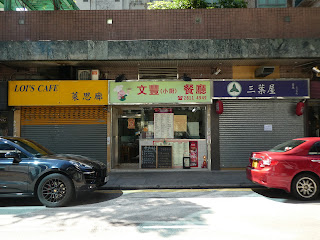 Some businesses took part in the strike yesterday 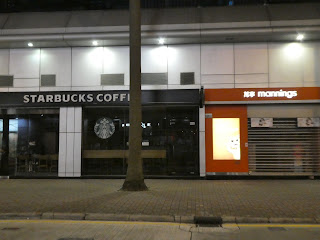 These stores were open yesterday but closed
early today due to fear of Triad attacks! :O

After yesterday's tumult  -- over the course of which the police fired 800 rounds of tear gas in the course of a single day! -- peace has reigned for the most part today in Hong Kong.  While walking through Victoria Park this evening, I got to remembering how lovely this place can be while gazing up at the clear night sky, the cultivated greenery in the park and people having a good time there doing such as playing soccer or basketball with friends or just sitting about shooting and enjoying the breeze.
At the time of writing though, a crowd has gathered outside Sham Shui Po police station after the president of Hong Kong Baptist University's student union was taken into custody for being in possession of a laser pointer he had bought in Sham Shui Po; this after the police deemed the device to be an offensive weapon despite laser pointers in fact being legal to purchase in Hong Kong.  With the police being particularly prone to over-reaction these days, it wouldn't surprise me if more tear gas were to be fired tonight even while I of course am hoping that this would not be the case.

Over in North Point, where men with sticks attempted to beat up pro-democracy protesters, only to have been handed a beating themselves last night, there also was tension in the air for part of the day as rumors spread of Triad thugs planning to descend on the area to seek revenge for their bruised "brothers".  (Interestingly, even while North Point has a reputation for being a super pro-Beijing area, the suspected reinforcements are said to have come from the Mainland rather than be consist of area locals.)

While it's looking like it all was a false alarm, many businesses took the rumor to heart and closed early for the day.  We're not just talking here of local businesses but branches of large and international chains such as Starbucks, Pret A Manger and Mannings.  And many of the businesses that didn't close early probably might as well have since they had way fewer customers than usual this evening.

To put things into context: while some businesses in the area did close yesterday to take part in the general strike that had been called for by anti-extradition bill protesters, more of them closed early because of fears of Triad violence today.  In addition, it's also true that even more businesses closed because of a typhoon's visit last week than either fears of Triad violence (at least today in North Point; the experience of Yuen Long a couple of weeks ago seems more extreme) or in support of pro-democracy protests.
Something that I think is worth noting though about the busineses close to where I live: the ones operated by protest supporters (or protesters themselves) that closed yesterday did not close early today.  I am guessing that their owners are less easily scared by rumors of violence -- or just braver folks all around! ;b
Posted by YTSL at 11:24 PM

I've been checking in frequently on your reporting of the protests, YSL. I'm relieved you haven't been seriously harmed. Thanks so much for the updates! I wrote you separately at your Blogger email address on July 14, and I haven't heard back; but I imagine you're not spending time writing loads of email right now. Thanks so much for your effort! My heart goes out to the people of HK. Lucy

Thanks for your comments on this blog and your email (which I've received). I apologize for having become a terrible emailer but will endeavor to reply to yours within the next few days!

I completely understand about the emailing, YTSL. I'm just relieved that you received the email I wrote you.

No rush to reply, okay? Like many of your other readers, I'm sure, I'm happy to continue to read your reporting on the protests. The New York Times coverage is spotty, and I don't trust its reporter, Austin Ramzy, to get his stories right: https://www.nytimes.com/by/austin-ramzy

Please carry on! And, thanks! Lucy

Thanks for your understanding -- and also for valuing my writings about the protests. The New York Times has had some good features on Hong Kong recently (I particularly value the videos they made about police brutality and what happened in Yuen Long). But it's true enough that some of the coverage is a bit questionable. I'm not sure that it's Austin Ramzy's fault though. Rather, I think it might be the case of editors over in New York adding in stuff that sought to contextualize but ended up being rather strange -- e.g., in one instance, making Tsim Sha Tsui sound like it was really close to the Hong Kong-Mainland China border rather than just across the harbor -- and only one MTR stop away -- from Admiralty!