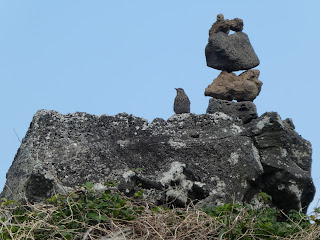 Bird among the rocks at Seopjikoji ;b 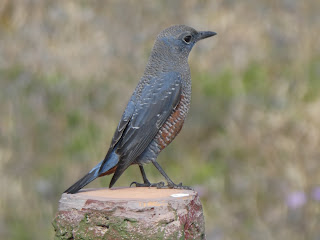 Another bird spotted in the same area! 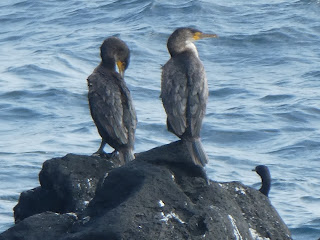 Cormorants on the Jeju coast

Back in the winter of 2013, I went on a World Wildlife Fund tour of the Mai Po Nature Reserve.  At one stop in the tour, our guide pointed to a bunch of rocks in an area where lots of birds had flocked and asked us if we knew why the tops of them were white.  When one person guessed that the white stuff on the rocks was bird shit, our tour guide signalled that the answer was indeed correct with a big laugh.
So when I went to Seopjikoji and saw that a number of the rocks in the area (including its landmark candlestick-shaped Sendolbawi) were white topped, I knew that this area would be one where birds abounded.  Still, it was quite the bonus to come across species that were more interesting looking than the ones I had caught sight of while visiting the Jongmo Shrine in Seoul some years back.
Because of their size, the cormorants -- which look similar to ones I've seen in Hong Kong, as opposed to the great cormorants I saw in Inuyama, Japan, just a few months previously -- hanging about on the coast were easy enough to spot.  And a more brightly colored bird made itself easy to spot by posing atop a wooden post close to the path I was walking along!

Less easy to spot though was a small spotted bird that I initially mistook for a small rock!  That mistaken identity may sound unlikely but I think you'll be able to see how I made it when you look at the photo at the top of this blog post! :b
Posted by YTSL at 10:14 PM

The birds in the first two photo maybe some sort of Thrush. The body shape and beak shape seemed right according to my birding book, but I am still uncertain.

Thanks for tring to ID those two birds. Would it be correct to surmise that, like me, you haven't seen members of those species in Hong Kong?

I have a vague impression that the Hong Kong Park Aviary has some Thrushes, but their feather colours are not the same as those in your shots.

So I could say I have seen some Thrushes in town in captive sometime ago. But you are correct, I have not seen them in the wild.

I must admit that when I go to the Hong Kong Park Aviary, I tend to fixate on the super colorful birds there... ;)

I will check agian at Hong Kong Park next time. I could not recall exactly how the Thrushes there look, but the vague impression is that they are a bit more colourful then the two you shot.

https://www.lcsd.gov.hk/en/parks/hkp/birds_collection.php Don't know if there are any changes over the years, however.

In case you didn't know, the Hong Kong Park aviary is currently closed for refurbishment. It's due to reopen next month:-
https://www.lcsd.gov.hk/en/parks/hkp/facilities/outdoor/edward_youde_intro.html