Years ago when two friends -- one of whom lives in Vermont, the other in Tokyo -- and I met up for an Okinawa rendez-vous, we visited spots that were listed in our English language guidebooks like the fantastic Churaumi Aquarium and expansive Ocean Expo Park but also places we only learnt about after arriving in Okinawa from local tourist brochures such as Okinawa Honto's Manzamo.  And on Jeju, we -- this time supplemented by my mother's presence -- did the same and once again found our visiting "strategy" paying dividends.

In particular, all four of us really loved our time at Seopjikoji, a narrow peninsula located -- like the far more famous Seongsan Ilchulbong -- on the eastern side of Jeju and are so glad that we found the mention of it in the free guidebook given out by the Jeju Tourism Organization intriguing enough to check it out.  For while it was already really cool that we got to see the haenyeo swimming and diving about in the waters off Seopjikoji, we also then ended up spending a further couple of hours exploring the area that's also home to interesting rock formations, a lighthouse and locations which featured in Korean TV drama All In (which one of our party had viewed before we met up in Jeju)! 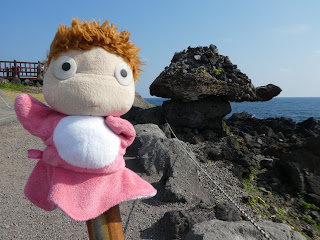 Puppet Ponyo and another of those rock formations
(how come there are so many?!) that resembles a turtle/tortoise 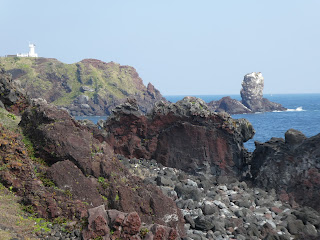 View of the Seopjikoji landscape that includes two local landmarks:
the lighthouse, and the rock formation known as Seondolbawi 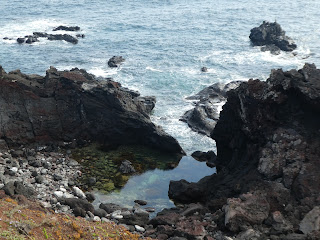 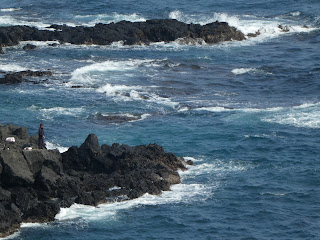 I think one has to be a bit off the rocker as well as daring
to decide that's a good place to go fishing! 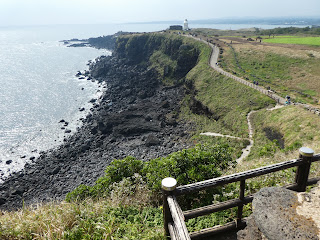 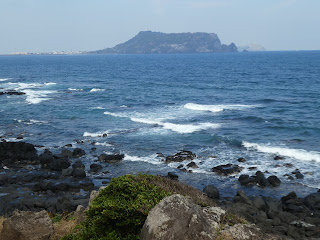 View of Seongsan Ilchulbong and Seongsan town from Seopjikoji 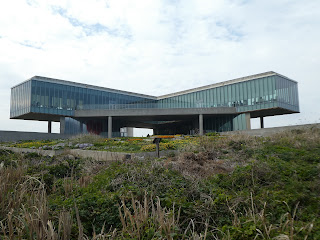 A building that I consider to be a blot on the Seopjikoji landscape
which, bizarrely to my mind, happens to house a Zippo Museum! 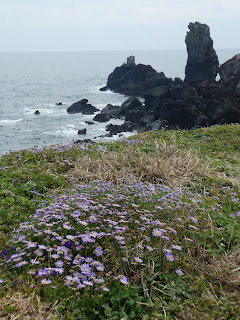 All told, I way preferred the views of the more
natural elements of Seopjikoji's landscape
Posted by YTSL at 10:56 PM

The water photos are great.
Coffee is on

You've taken your time documenting the trip to Jeju, spacing out your entries, giving them time to sink in. The result is the kind of fully realized quality you often reserve for your
best Japan blogs...You've posed Puppet Ponyo in her characteristic ebullience, with a turtle
rock acquaintance in the background...I'm sure she was quite pleased to be a member of your
travel party.

The combo of the water and rocks often were mesmerizing over at Seopjikoji! :)

I have indeed taking my time documenting my trip to Jeju. It's been some two months since I was over there but many of my memories of that sojourn remain strong -- thank goodness! -- and no doubt will be strengthened by my Jeju posts.

And yes, Puppet Ponyo was indeed pleased to be a member of my travel party since she's old friends with all the other members, not just me. ;b

With so many interesting locales that you visited in Jeju, would you be able to recommend, let's say a 2.5 day itinerary to see what you consider to be the best of Jeju?

it's strange but I actually like seeing ponyo in your photos...

have a great new year.

Jeju is larger than many people realize and I'd do what my party did and choose to base ourselves in two different sections of the island rather than try for the trifecta of Jeju City, Seongsan and Seogwipo. Also, given that you are similar to me in not loving tourist crowds, I think you might want to steer clear of Seogwipo like we did.

Of the places I visited on Jeju, would say that Seongsan Ilchulbong (particularly, viewing the sunrise from atop it) and Seopjikoji are "must visits" and actually could both be done together in a single day. Because there were two 70-something-year-olds in my party, we didn't go to the Manjanggul Cave that's also located on the eastern side of Jeju but I have a feeling that they'd be something you want to put on your itinerary. Something else that I had to save for another Jeju visit was a Hallasan hike. Maybe you'd like to devote a day in your itinerary to that?

You may think it strange but rest assured that you're not the only fan of Puppet Ponyo out there! ;)

Hope you have a great 2019 too, and that we'll meet up again in Hong Kong for more hikes and dining some time in the new year. :)