The seafood feast that was the best meal we had on Jeju! 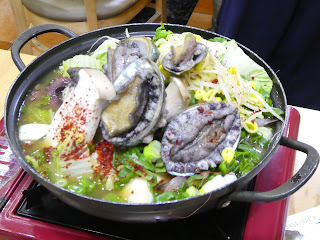 The main dish we ordered at dinner
at a Jeju City seafood restaurant :b 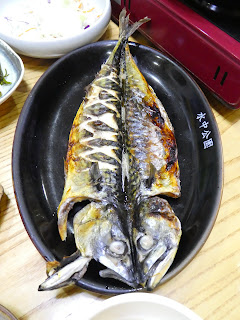 The second dish we ordered for that meal :) 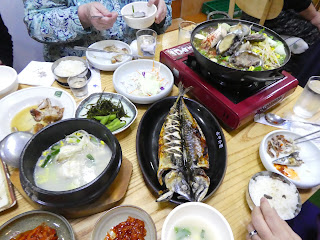 A partial view of how our table for four ended up looking! :O


All too soon, it was time to say goodbye to Seongsan Illchulbong and the rest of eastern Jeju.  But before we bid farewell to the southern Korean island where we had had such a good time, my party of four first drove back to, and spent the evening and night in, Jeju City.

When scouting for restaurants to eat at near our hotel, I noticed a preponderance of Korean fried chicken and barbecue places.  I'm not sure if the rest of Jeju's provincial capital is like this but the sense I got from my neighborhood recce was that Jeju City felt more typically Korean -- at least in culinary terms -- than the rest of Jeju.


While I have nothing against "regular" Korean food (and, in fact, am a big fan of it!) or, for that matter, the meat of land animals, my party nonetheless unanimously agreed that we'd like to have one more seafood dinner in Jeju before we bid farewell to the island and also different members of our quartet.


So we ended up going to one of just two seafood restaurants I had seen on my neighborhood recce: an establishment which felt like a truly local family as well as thoroughly unpretentious place in that it came complete with a playpen to one side of the dining area for the restauranteur's children that one cheeky member of our quartet joked was where we could make "picks" the way some people like to do with seafood in restaurant aquariums!


With two members of our party being non-Asians, we caused quite the stir when we first went into the restaurant.  But once we started ordering food and drinks (beer and soju as well as both cold and lukewarm water) in a manner that assured them we knew what we were doing, and especially after we started tucking into the food laid out in front of us with obvious relish and enthusiasm, everybody relaxed and things got really comfortable and super enjoyable.

At the end of it all, every member of my party decided that this was the best meal that we had in Jeju -- which is saying quite something since we had a lot of good meals and food over the course of our all too short time on the island!  Here's the thing: the main dishes we ordered (a seafood hotpot that came topped with large abalone that were still alive and moving(!), and a large grilled mackerel) were really delicious but what truly made the whole affair so outstanding was the banchan that we were served.

In addition to the regular kimchi and vegetable banchan, we also were given a big bowl of soup/stew, a grilled fish dish that I initially mistook for the grilled fish we had ordered (to the point of whispering to the friend closest to me that we might have mistakenly ordered grilled saury rather than grilled mackerel) and a pickled/marinated crab dish that more than one of my party later said that we would have been happy to order and pay for if we had seen it on the menu! And, amazingly, after we devoured all the ganjang gejang laid out before us, the waitress came over to our table and asked us if we'd like a refill of that particular banchan -- to which we all told her "yes" most emphatically!

One member of our party pronounced mid-meal that she would have been happy if served just that pickled/marinated crab dish and soju alone for dinner.  Another laughed and pronounced her a cheap date but I think we all were agreed that it was absolutely delicious.  Even now, when writing about it, my mouth is actually watering at the memory of this dish -- which is similar to a Teochew (aka Chiu Chow) marinated raw crab dish that I've had before and equally delectable to my mind!  And for the record: I thought those super fresh abalone were pretty good too! ;b
Posted by YTSL at 6:13 PM

I'm re-reading your Jeju posts. Thanks to Coronavirus which has led to an abrupt change of plans, I'll be arriving at Jeju on Sunday!

Hope re-reading my Jeju posts have helped you figure out where to go and what to do there! In any event, hope you have lots of fun and good eats on your Jeju sojourn -- and I look forward to reading your Jeju posts at some point! And may you steer and stay clear of the Wuhan coronavirus!!

So I'm back. Spent 4 nights in Jeju and still not seeing everything I wanted. And some of our meals ended up looking quite similar to yours -- an abalone galore.

I look forward to checking out your Jeju posts! Hope you treated yourself to a black pork barbecue while there too! ;b