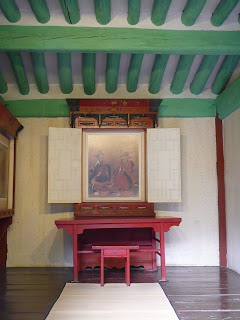 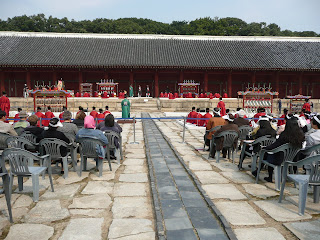 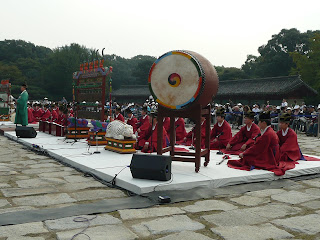 Part of the musical ensemble, including a drum
with the Sam-Taegeuk symbol on it, taking part in
the Jonmyo Jeryeak (royal shrine music) performance
On the first full day of my recent South Korea vacation, I visited one royal palace (in the form of the Hwaseong Haeng-gung) and a UNESCO World Heritage-listed site (in the form of Hwaseong Fortress). The next day, I visited not one but two more UNESCO World Heritage-listed sites. And even more impressively, at the first of the pair I visited in Seoul, I got to attend a concert of music that has been proclaimed by UNESCO as among the Masterpieces of the Oral and Intangible Heritage of Humanity!

More specifically, the first attraction that day that my mother and I visited was Jongmyo Shrine, the Confucian shrine for Korea's Joseon Dynasty of royals. As we strolled around the expansive complex, we heard solemn-sounding music being played -- and assumed that it was piped about for atmospheric effect. But upon nearing the ancestral place of worship's Main Hall (Jeongjeon), we got to realizing that there was a live music ceremony, complete with performers in colorful costumed glory, taking place.

When Joseon Dynasty rulers reigned over Korea, the Jongmyo Jeryeak (royal shrine music) was performed as part of the Jongmyo Jerye, the royal ancestral rite in praise of the virtues of deceased kings. These days, however, that which dates back to the 15th century is occasionally played at Jongmyo Shrine for people -- Korean and otherwise -- to appreciate.

As pleasant as it was to stroll the grounds of the royal ancestral complex, it's also true enough that what made our visit to the historical site feel special was our chancing to witness the Jongmyo Jeryeak performance. And what made it feel all the more impressive was that there was a sense that the performers were seriously entering into the spirit of things -- and thus, years after the end of royal rule in Korea, still intent on solemnly honoring the spirits of those deceased whose shrine this is.

Korean classical design looks very clean, spare and minimalist, real "form follows function" (long before that was coined) stuff. I don't mean dull, be any means--the family shrine in the first picture couldn't be any better and couldn't be much simpler.

Which makes the extremely ornate, decorative only pieces stand out. The top of rack of bells on the left of the second photo, for example, with what look to be dragon heads on either end and a lot of detail between them is repeated on several other rack type things--to the right of the same picture is an example with a few more on the stage.

The one I really like, though, is the stylized white tiger crouching on the wooden stand on the last one. Will have to figure out how to use him as an avatar or something.

They sure do -- and especially in comparison to Chinese imperial designs and architecture... which can be so over the top that, as I remarked to my mother while walking in the Summer Palace in Beijing, small wonder that the common people could be moved to stage a revolution!

And yes, I agree that functional, etc. doesn't have to mean dull. All in all, even while it's on the plain side, I generally did like what I saw of Korean royal and/or historical architecture.