An unlikely haven for lovers of nature in Hong Kong 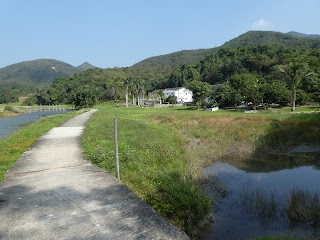 At Sham Chung this afternoon 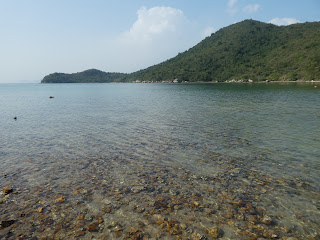 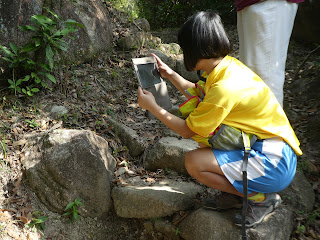 Photo of a friend photographing a lizard spotted
on our Sham Chung hike ;b


My heart sank when I walked out of my apartment this morning and saw how polluted the air looked -- about as bad as last Saturday, as a matter of fact.  Having arranged a couple of weeks to go hiking with two friends in the Sai Kung Peninsula, I pressed ahead with my journey to Sai Kung town.


After meeting up with then though, we quickly agreed to change our hiking plans.  More specifically, we decided to save Tai Long Wan for a clearer day and venture instead on a largely inland route from Pak Sha O to Sham Chung that would offer up plenty of cool close-up sights as well as be less physically demanding.

Early on in the hike, I mentioned to my friends -- who had never been to this part of Hong Kong despite being long-time residents of this territory -- that I liked going along this route in warm weather as certain sections of it can seem like a veritable bug highway.  And while we didn't spot as many bugs out today as on other times that I've been this way, it's worth noting that it's supposedly to be currently the middle of winter in the Big Lychee!

Still, it's also true that today was an unseasonably hot day -- with maximum temperatures of 27.3 degrees Celsius having been registered in Pak Tam Chung this afternoon!  So I guess it shouldn't have been all that surprising that we did spot some butterflies, a couple of dragonflies and at least one long-tailed lizard as well as quite a few birds about the place!

Actually, the sight that I really was surprised to see today was beautiful blue skies over Sham Chung on a day when much of the rest of Hong Kong was enveloped in haze.  Coupled with the clear waters to be found in Sham Chung Wan, I felt like I was in a most unlikely haven in Hong Kong; one I sincerely hope will not be a case of Paradise lost -- be it as a result of greedy land owners, property developers or the government -- any time soon.
Posted by YTSL at 7:17 PM