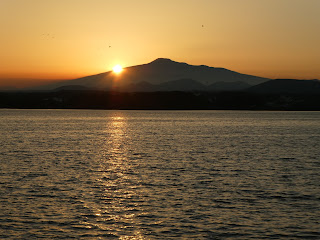 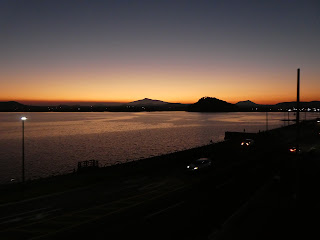 Twilight view from the balcony of my Seongsan hotel window 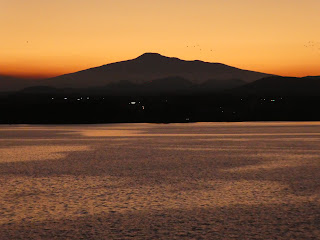 In the hour after the sunset, South Korea's
highest mountain loomed really large over the landscape
Shortly after arriving in Takayama by way of the Hida Limited Express from Nagoya last month, I was unexpectedly treated to a beautiful sunset sky show by Mother Nature.  In Jeju earlier this month, I got more of an advance warning that I would get to see another beautiful sunset when, as my party of four were walking back to our hotel after our black pork feast, we noticed that the sun was casting long shadows and turning the western part of the sky a reddish orange.
Hurrying over to the edge of the lagoon in front of our hotel, I managed to snap one shot of the setting sun before it vanished behind Hallasan (which, more than incidentally, was considerably further away from Seongsan than it looks courtesy of it being really pretty massive!).  Having learnt over the years by way of viewing sunsets at the likes of Tai Mei Tuk and Matsue that the sky show doesn't immediately end after the sun vanishes over the horizon, I tarried a while to enjoy the golden hour displays -- and, even after finally retreating to my hotel room because the temperatures fell pretty dramatically once the sun set, I still couldn't resist spending a few minutes checking out the views from my hotel room balcony.
For my troubles, I was rewarded with the kind of views that one feels very lucky to be able to observe; this even though the sun does set every day!  And okay, it might seem weird to segue into the following but I once was asked which of the five senses I feel least able to do without -- to which I pretty immediately replied that it would be sight.  Without it, I really think I would feel lost -- when venturing outside my home but also within it -- as well as be deprived of being able to enjoy two leisure pursuits I enjoy so very much: reading, and watching movies.
I also would be unable to appreciate so much of nature's beauty; be they in the form of cool flora or fauna, and also amazing sky shows courtesy of the rising and setting sun.  So, truly, I am grateful that I do indeed have vision in my eyes -- and also am grateful that I have been able to see so much of the planet's beauty over the years. :)
Posted by YTSL at 11:59 PM

These sunset and twilight views are wonderful and would likely linger in a traveler's mind. I visited Jeju years ago and have forgotten much, which is why I look forward to your future entries on this island.

Those sunset and twilight views have most certainly lingered in this traveler's mind. Did you manage to view choice sunsets (and/or sunrises) when you visited Jeju? I hope so!

As I remember, I managed to witness sunsets, but no sunrises.

Bet you would have remembered if you had witnessed a sunrise in Jeju. So I think it safe to surmise that you didn't do so! ;b