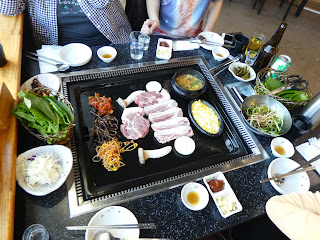 Quite the spread for four people, right? ;b 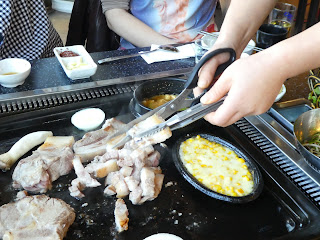 Local custom dictates that the meat needed to be cut up
(using scissors!) into bite-sized pieces before we dug into it! ;D

Less than a month after I got back to Hong Kong from my most recent Japan trip (which saw me spending time in Nagoya, Inuyama, Takayama and Hida-Furakawa), I was off again -- this time with my mother in tow -- to meet up in Jeju, South Korea, with the two friends I had an Okinawa rendezvous with some six years ago.  My mother had met this mother-daughter pair when we went off together for a Hakone holiday (that included two nights at the wonderful Gora Kansuiro) a couple of years ago and we all had clicked so well that we didn't only end up hanging out together some more in Tokyo but my mother also got to suggesting that the four of us should meet up again in Jeju some time.

With our different schedules plus the four of us living in different parts of the world (Vermont, USA, for one of my friends, Tokyo for the other, Malaysia in the case of my mother and Hong Kong for me), it's not surprising that our Jeju trip took some time to plan and come into being.  But it really did happen eventually and the four of us were reunited at the airport when my mother and I flew in and were met by our two friends (who had arrived the previous day and done such as rent a car for us to drive around in for all but our final day on the island).
From the airport, we headed straight to the first hotel that we'd be staying in on Jeju.  Located in Seongsan, over on the eastern side of the island, it would require what to me would qualify as a long distance drive but what my friend who was driving had said wasn't all that far as far as she was concerned.
A few minutes into our car journey, we received quite the shock when what my mother had thought was the sound of a train horn in the distance turned out to have been made by the driver of the car behind us who was so upset by our being in the way of his being able to make a turn that he got out of his car to pound on one of our car's windows!  As I later remarked to the people in the car, it made for quite the dramatic welcome to Jeju but perhaps we should have expected this sort of aggressive behavior in view of what we've seen of Korean people in Korean movies and TV dramas!
Speaking of K-dramas: that's the main reason why my mother and one of my friends had wanted to go to Jeju!  And we did indeed visit a few spots on the island which had been locations for Korean TV dramas.  For my part though, Jeju's primary attraction came by way of its specialty foods.  And when we sat down to our first meal together on the island, we all got a very good feeling that we'd be eating super well during our stay in this part of South Korea!
After checking in to our hotel, we went in search of a place that was open on a Sunday and came across a restaurant which served up Jeju black pig.  Following the waitress's recommendation that we get two dinner sets, we had our second shock of the day when we saw the large amount of meat as vegetables (to wrap the meat in and such) well as banchan (side dishes) -- which included a few varieties of kimchi but also less traditionally Korean delicacies like a sizzling creamed corn concoction! -- brought to our table.  On the other hand, being veteran consumers of Korean food, we didn't bat an eyelid when the waitress came over with a pair of large scissors and started cutting up the portions of pork that had been cooking on the grill into bite-sized chunks!
Although we all had not thought that we could do so, we ended up finishing up every bit of the meat we had been served.  All in all, I think it's less a testament to our appetites and more to how very tasty the Jeju black pig really is.  And for the record: yes, I most definitely would concur with those who say that it's the wagyu of pork and might even go so far as to say that it's the best pork I've ever had in my life!   And while one would expect the pork at a Jeju black pig specialist restaurant to be good, the pork at our hotel's breakfast buffet the one day we decided to try it was pretty fabulous too, making what otherwise would have been a rather average hotel breakfast buffet spread into something very enjoyable indeed! ;b
Posted by YTSL at 9:24 PM