On top of the world at Borobudur! (Photo-essay)

The first day that my German friend and I were at Borobudur (and, indeed, in Indonesia), we restricted ourselves to checking out its lower levels, deciding to leave the nine platform Buddhist structure's upper lower levels for the next day.  On our second day in the area, we found the monumental UNESCO World Heritage-listed site's square terraces to be pleasantly uncrowded but discovered that its upper, circular platforms were chockful of people who, we got to realizing, had made straight up the stairs to them (rather than linger in the lower levels like we had)!

After trying in vain for a few minutes to enjoy the views of and from the upper tiers of this stepped pyramid of sorts, I gave up doing so and resolved to return very early the next morning.  Consequently, my third and final day at Borobudur saw me waking up at 5am and then heading over to the site proper with just a cup of coffee fuelling my hike up to its upper platforms since the breakfast service at our hotel doesn't begin until 30 minutes after Borobudur's gates officially open!

Those who know of my preferred waking hours will appreciate how much of a sacrifice this was.  But I really considered it to be so worth it as I felt much more able to take in the views of and from the monument's upper tiers at leisure -- and be able in some instances to snap shots of the place without a single person encroaching into the picture! :) 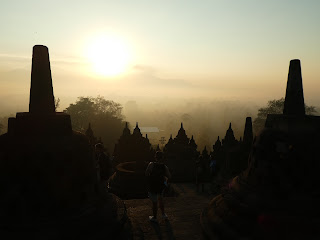 Early morning at Borobudur :b 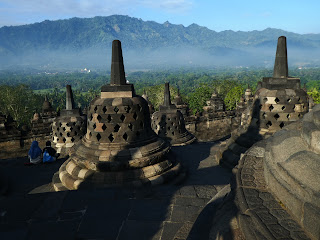 The morning mist and surrounding scenery undoubtedly
adds to the visual magic of the place :) 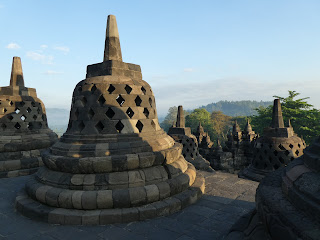 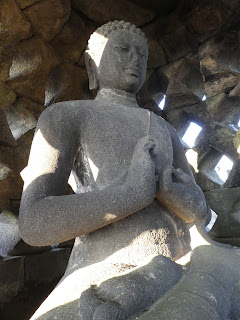 Inside all of them are Buddha statues though, sadly,
few are as complete as the above pictured one 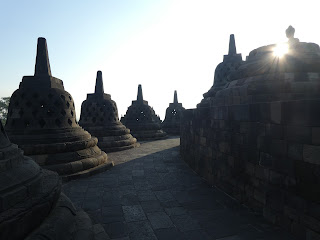 A few of the stupas have been partially uncovered,
revealing the Buddha statue which lies within 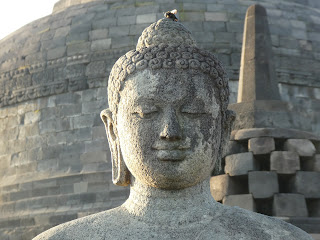 While exposing the statues to the elements, the uncovering
allows one to get up closer to them and appreciate
how serene are the expressions on their faces 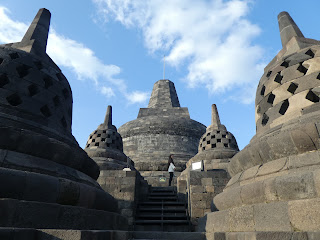 Click on the above image to get a panoramic view which
should give you a good sense of Borobudur's scale (and
remember, you're just seeing its uppermost tiers here!)
Posted by YTSL at 10:41 PM

All of these stunning morning photos capture the scale and beauty of Borobudur in nature and make me long to return for a second visit one day. Central Javanese Buddhist sculpture is considered some of the finest produced in Asia. These photos prove it.

I am totally enjoying your photos of Borobudur!!!

I don't know how it was when you visited Borobudur but I was pleasantly surprised by how, even while it expectedly attracts a fair few visitors, the crowds weren't usually overwhelming -- like I've heard that have regularly become at Angkor Wat. As my German friend said: it seems we visited Borobudur before it all goes crazy -- though, sadly, it may well be that we missed that window of opportunity with Angkor Wat.

I must admit that when I visited Borobudur it was in the late 8O's, but my experience was similar to yours in that it wasn't too crowded. As for Angkor, I would like to visit it, even with the high volume of visitors. I read a comment online that a satisfied visitor to Angkor had a guide take him to the most popular sites at lunch hour when there were less tourists around. Well, whatever the time, I don't think it will be as peaceful as the scene from In The Mood For Love...

Your waking up at 5am was totally worth it!

I'd like to visit Angkor Wat some day -- only now, I worry that it will seem anti-climactic after my visits to Borobudur and Prambanan, even while having zero expectations that I'll come across a scene as peaceful there as was depicted in "In the Mood for Love"! (BTW, did you go to the latter too?)

Yes, I actually agree -- which is really something! ;)

To answer your question, yes, I did visit Prambanan, but it was such a brief visit, I didn't do it justice.

I, too, wish I spent more time than I did at Prambanan. Still, I do think that my German friend and I did spend more time at the main and subsidiary temples than most -- and hopefully my upcoming blog posts and photos of it will help provide evidence of that! ;b

So nice to see these spectacular photos and imagine you there! The last time I was there 92008), I made it for a dawn visit...and it is definitely nicest at that time. Lovely photos!

Did you stay at the Manohara Resort too? If not, then you really did make quite the sacrifice to make it to Borobudur at dawn! ;)