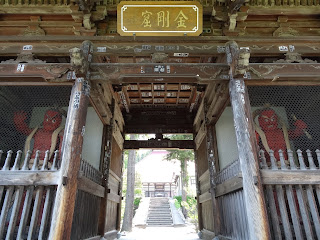 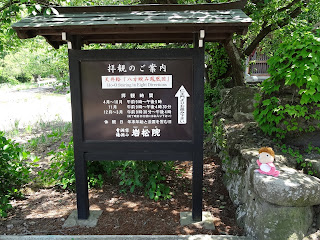 Puppet Ponyo also was perplexed -- rather than informed --
when looking at what was written on the temple's main sign ;b 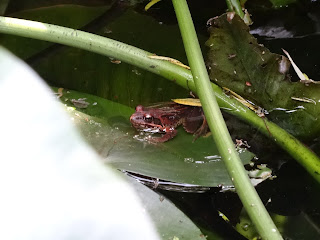 One of the froggy residents of Ganshoin's back pond!
On the third day of my recent Japan trip, I went to Obuse -- a beautiful little town in Nagano Prefecture whose claims to fame include being where the great artist Hokusai spent a good bulk of his productive final days.  After arriving in this town (whose foreign visitors a chatty local Tourist Information Centre staff member told me were most likely to hail from France!), I headed over to the attraction farthest from the city center that I wanted to check out: Ganshoin, the Zen Buddhist temple that's home to Hokusai's largest painting, which he painted in 1848 when he was 89 years old.
The friendly lady at the Obuse Tourism Information Centre told me that Ganshoin's about 30 minutes walk from the train station and so it proved.  She also told me that I should follow one of the main roads leading away from the train station.  That proved a little bit difficult until I got to realizing that what some of us might consider a country lane is actually considered a main road by denizens of this fairly quiet as well as very picturesque town!
It took me a while too to figure out that I had reached my destination when I got to Ganshoin as the temple's name isn't prominently written out in Romaji at the site.  And it didn't help that instead of being referred to as the Phoenix Glaring In All Directions (as I've seen elsewhere), the painting of a phoenix which -- wherever you stand in the room -- always looks to be looking at you that Hokusai painted on the ceiling of the temple's main hall is referred to on Ganshoin's main sign as "Ho-O Staring in Eight Directions"!
Thankfully, upon entering the main hall (and paying a small entrance fee), one is given a pamphlet which, among other things, contains the following explanation:  "The Ho-O is said to be an auspicious bird that lives so long that finally various plant grow on its body...The bird seems to stare at the viewer no matter which direction it is viewed from. [T]his is the source of its name 'Ho-O Staring in Eight Directions'."
Unfortunately, photographs are not allowed of this magnificent Hokusai creation whose total size is more than 30 square meters (or, for that matter, anything inside Ganshoin's main hall).  But I'm sure you can imagine how this masterwork dominates the scene and really is the kind of art work that one feels a need to stare at for several minutes because it truly is sublime as well as large.  And of course I had to verify that the phoenix in the picture does look like it's staring at you wherever you are in the room.  How Hokusai achieved this effect I honestly don't know but achieve it he absolutely did!

Along with some really stunning art works, Ganshoin's main hall also contains a number of pretty kitschy depictions of frogs (including ones in pro-creative poses like a pair I saw in action at Okinawa's Churaumi Aquarium!).  Again, the information pamphlet came to the rescue by providing an explanation as to why there seems to be an unusual obsession with the amphibians here: i.e., "Each year in the season of hanami (cherry blossom viewing), countless frogs appear in the small pond in the backyard of the Ganshoin Temple.  The male frogs like to assist the female frogs in their reproductive duties.  There is quite a scramble by the former for the latter, who are fewer in number"!
What with it being no longer hanami season when I was at Obuse, I didn't expect to see frenzied frogs milling about at the pond next to Ganshoin's main hall but was hopeful of seeing at least one frog resident about.  And so it proved -- and I have a rare (and consequently prized) frog photo taken by yours truly to prove it! ;b
Posted by YTSL at 11:08 PM