After spending time inside a Ninja House and more at Togakushi Minzokukan, I crossed the road and headed over to begin a trek that'd take me past hundreds of centuries old cedar trees and several meters uphill to the highest placed of the area's Shinto shrines.  Although this circa 40 minute tramp can prove too much for some people (including a mother and her young child who I saw turn back midway when it got hillier than she must have anticipated), it turned out to be only the beginning of what turned out to be an afternoon's worth of hiking for me.

Enticed by stunning images I had seen of Kagami-ike (whose "kagami" means "mirror" and "ike" has been variously translated as "pond" and "lake") and mistakenly thinking that the Togakushi Forest Botanical Garden that lies between it and the Togakushi Shrine's thatched Zuijinmon (gate) would be more tame botanical garden than actual wild forest (complete with "beware of bears" signs!), I decided to walk over there. Then, rather than retrace my steps, I decided to hike over to Togakushi's middle shrine along a trail that turned out to be hillier than I would have liked but which I did not regret going on after it took me by the smaller but also beautiful Kotoriga-ike and a mountain lookout point known as Suzuri Ishi with breathtaking views.

Because of the various "beware of bears" signs I saw along the way, I actually went along at a quicker pace than I would have liked, especially on the last leg, when I didn't see any people after I left Kagami-ike until I got to the village area near the middle Togakushi Shrine some 40 minutes later.  Nonetheless, I really did enjoy the afternoon of hiking -- not least because it was in gorgeous weather and some of the most beautiful countryside I've ever been in (as I hope that the following photos can give a sense of)... :b 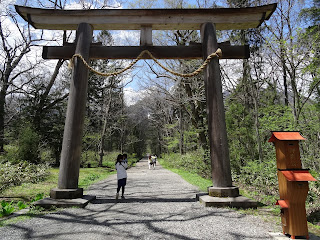 Pass through this torii and you're on sacred ground 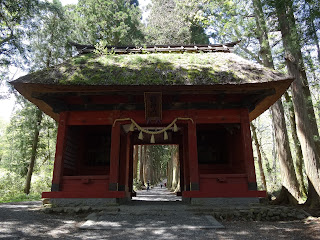 Beyond the Zuijinmon lies an avenue of cedar trees,
some of which are over 800 years old 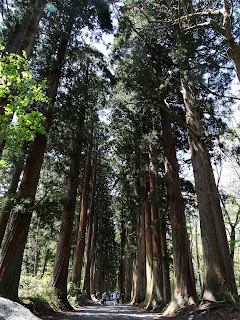 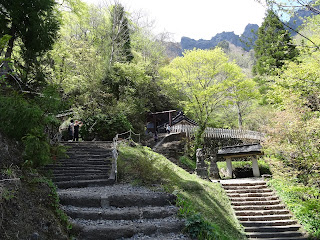 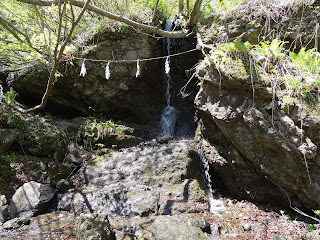 Consider that this is a part of the world where mountains,
trees, rocks and waterfalls can be considered sacred 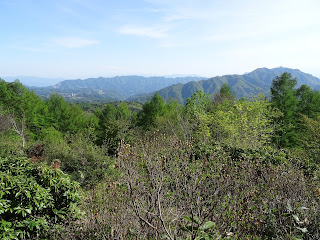 When taking in this scenic view at Suzuri Ishi, I got to
realizing how far up in the mountains I was, and also
how lovely this part of the world is 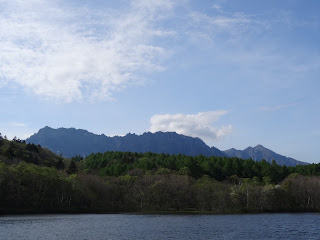 This view from the banks of Kotoriga-ike was all the more
enjoyable because of the absolute serenity and satisfaction I felt
from there being no other person in sight, and probably for miles :)
Posted by YTSL at 10:37 PM

I'm trying for the third time to leave a comment here, using a small mobile device since the hard drive on my laptop crashed.

This is one of the very best of your many Japan entries. Many kami must inhabit this area. Every photo and word of this blog vividly captures your ambitious trek. Who could feel any trace of urban induced anxiety in such a tranquil place?

Oh dear re your laptop's hard drive having crashed! Hope it'll be fixed soon and in the meantime, thanks much for your attempts (successful on the third try!) to leave a comment on this blog.

I really did feel that Togakushi's a wonderful place -- and tranquil was how it felt while hanging out on the banks of both ike. Have to admit though to being too freaked out by the "beware of bears" signs to feel as tranquil as I would have liked when tramping about in the forest with no other people in sight! ;b