A Japan trip I figured would be wonderful even before my plane landed! :) 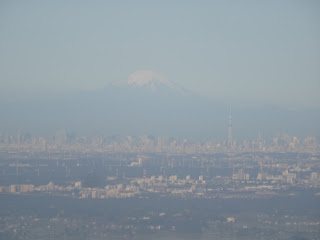 Can you make out Mount Fuji in this photo I snapped as the plane
I was on was descending down to Narita International Airport? 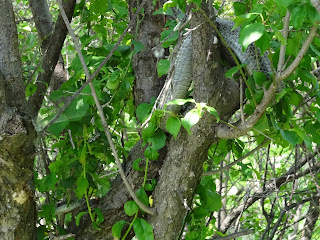 And what of the snake I spotted in a tree and managed to take photos
of while strolling around the largest wasabi farm in the world?! :O 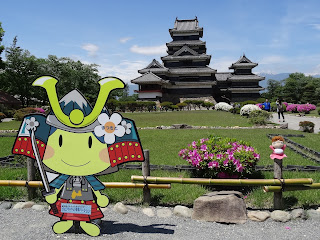 Also, it may not look like it but Matsumoto Castle
(in front of which Puppet Ponyo posed with a friend)
actually has six floors rather than five ;b

As regular readers may have surmised from my lack of blog posts over the past week or so, I was travelling about once more -- and yes, the Land of the Rising Sun was where I went once again!  What with the historic Tsukiji Fish Market being due to move later this year, I wanted to visit and have a sushi breakfast there at least one more time.  So this trip did see me revisiting old haunts in Tokyo as well as spending time venturing further afield to other parts of Japan that I had never previously been to.


As is my wont, I had requested a window seat on my flight into Tokyo and was looking out of the window, happily drinking in the views, as the plane I was on gradually made its way back to terra firma.  Seconds before we landed, I happened to notice a beautiful snow-capped mountain in the far distance -- and got to realizing with a start that I was being treated to a rare view of Mount Fuji!


Although I've been in places where Fujisan reveals itself on clear days (like Hakone and the Tokyo Metropolitan Government Building Observation Decks), I had never caught sight before of Japan's most sacred mountain.  So I really did feel that my first ever sighting of Mount Fuji was a portend of wonderful things to come on this latest Japan trip.


Consequently, even the first of two trains I needed to take to get to the first city I'd be staying at on this trip getting delayed for so long that I ended up missing my scheduled connection failed to dampen my spirits; this especially as I still did get into Nagano with plenty of time to do such as thoroughly explore Zenkoji, the popular and important Buddhist temple founded in the 7th century around which the city developed.


My good mood continued even after coming across numerous bear warnings while traipsing through a forest up in the nearby mountains the next day, actually spotting a snake curled up a tree a couple of days later, and being in Tokyo the day after, when a magnitude 5.6 earthquake hit eastern Japan, causing the building I was in to shake for a few seconds!


It helped that I ended up not crossing paths with any bears (only a few hikers with bear bells).  And even though I can't completely subscribe to the Japanese belief that seeing a snake brings good luck (like more than one friend has told me now), I at least now feel more used to the sight of snakes in Japan -- after also having encountered them in Shirakawa-go and on Bitchu-Takahashi's Mount Gagyu!


As for earthquakes: I've been really fortunate in my experiences of them being far less dramatic than could otherwise be the case.  (More than incidentally, the Kumamoto Earthquakes don't seem to be getting reported anymore outside of the country but one month on, there still is regular coverage of it on TV and donation drives for those affected by it within the country.)

More than anything, I came away from Japan with many more great experiences.  In the coming days (actually weeks!), I will be sharing some of these with you via my photos as well as words.  Suffice to say for now that, as ever, I saw many beautiful sights (natural and cultural), ate lots of delicious food, drank quite a bit of Japanese alcohol (that goes so well with Japanese food) -- and had more interactions that confirm once more that some of the best parts of visiting the country come from getting to know the people along with their culture and land.
Posted by YTSL at 10:32 PM