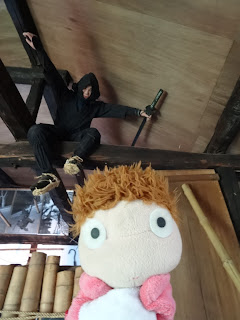 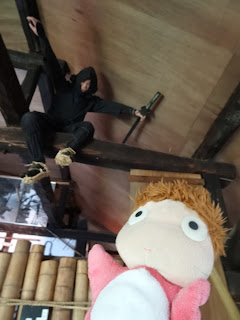 Puppet Ponyo finally catches sight of the ninja figure
poised above -- and looking ready to leap down at -- her! 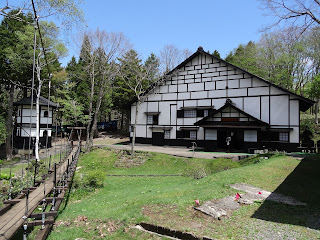 These two buildings have unusual elements built into them
and thus are much more than they appear! :b
On the second day of my recent Japan trip, I went on a daytrip to a highland area considered to be the birthplace of Togakure Ryu Ninpo, a venerable school of ninjitsu founded 800 years ago.  Located over 1,000 meters above sea level, Togakushi village is nestled among centuries-old cedars at the base of the rugged looking Togakushi Mountain Range and lies within the borders of Joshin'etsukogen National Park.  A scenic one hour bus ride away from Nagano, I felt like I had been transported to a different world when I arrived at Togakushi-okusha, the stop for the upper-most of Togakushi's five (maybe six) Shinto shrines -- and also for the Togakushi Minzokukan, one of two ninja-themed attractions in the area.

Whereas the Chibikko Ninja-Mura (Kids Ninja Village) seems more geared towards younger folks, the Togakushi Minzokukan looks to appeal more to adults; possessing a traditional-style folk museum (that I suspect would be far more interesting if it had possessed English language information panels) along with a ninja museum filled with photographs of ninja in action and ninja equipment.  At the same time, fun as well as information are to be had at this facility, which has ninja-themed attractions within its compound such as a Ninja House that I reckon is worth the price of admission to the entire place.
After going through the Ninja Mystery House over at the Toei Kyoto Studio Park and then also getting a guided tour of Kanazawa's Myoryuji, an architecturally complex Buddhist temple whose myriad secret entrances, exits, traps and such earned it the nickname of Ninja-dera, I figured that I now knew a thing or two about locating and going through hidden entryways and rooms.  But I still ended up spending a good 30 minutes or so inside what's effectively an intricate indoor maze before I managed to find my way out of it -- and even so, I needed the help of a staffer to locate a particularly tricky opening midway through!
In all honesty, locating the "Key to Paradise" at Nagano's Zenkoji was far easier than navigating one's way through the Ninja House in Togakushi!  And the surprises were not over after I exited this building where entryways can be found inside closets, behind scrolls, under irori, and more.  For as I ascended the staircase of a nearby tower with a mind to get a better view of the rugged mountain range peaking out of the trees, the whole structure began shaking so violently that it threatened to saddle me with a bout of motion sickness!
In retrospect, I wonder whether it was a deliberate move on the part of those behind the Togakushi Minzokukan to have its folklore museum -- which is the facility within the compound closest to the entrance and ticketing office -- be the least impressive of its sections as well as to locate its coolest components furthest away from the entrance.  This way, visitor expectations get lowered as they make their way around the place.  Then, when one's thinking it's all rather underwhelming, one'll get very pleasantly surprised at how there actually are some pretty nifty experiences to be had at this area attraction after all! ;b
Posted by YTSL at 11:37 PM

Love the Ninja photos with Puppet Ponyo. Please tell her I am there with her if only in spirit and together we can kick their a**es. This place is too much fun.

Puppet Ponyo says she would love to hang out with you again some time. Also, here's letting you know that she took another photo with a ninja later on during the trip and I'll probably put it up on the blog in the near future... ;b