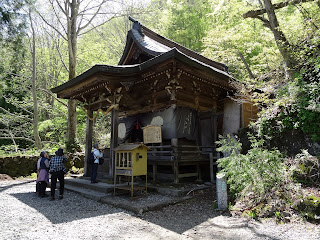 It takes effort to get up to the Kuzuryusha at Togakushi 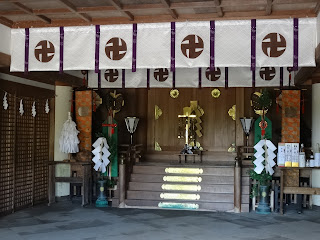 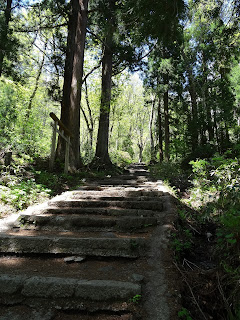 A visit to both of those shrines involves climbing up
lots of steps -- and this after first walking for
about 30 minutes along a flatter approach! 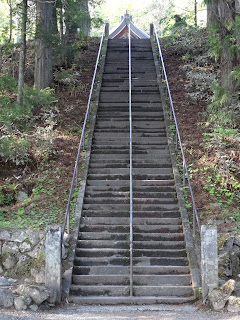 Not a sight one wants to see after
an afternoon of hiking, right? ;b


Three related thoughts that first occured to me when I visited the Toshugu Shrine and Taiyuinbyo at Nikko re-entered my mind during visits to such as Kyoto's Fushimi Inari Shrine and Kotohira's Konpira-san.  And I got to thinking (about) them when I was making my way up to Togakushi's Okusha too.


The first is that the journey really does seem to matter as well as -- and sometimes even more than -- the destination.  The second is that there sure are a lot of Japanese temples and shrines located up on hills!  Consequently -- and here's thought number three -- there often really are a whole lot of steps that one has to climb up to get to the main part of a Japanese temple or shrine, never mind its highest section!


I know many people get deterred from visiting these places because of the sheer physical effort that's required to get to them but there also is an often surprising number of people who seem to take this all in their stride -- and I've been further amazed by how many senior citizens I've seen going up paths that many younger folks deem too arduous to attempt!  I don't doubt that faith is one reason that propels as well as compels many of these elderly Japanese to do what they do.  At the same time though, I think that some of them are like me in finding some pleasure from being in surroundings that often tend to bring one closer to nature (as well as the various kami that are found in nature).

I'll be honest: I was attracted to Togakushi principally for its ninja connection and only decided to visit Togakushi's Okusha (upper shrine) because I figured (correctly) that it'd be an awesome experience to walk along the avenue of centuries-old cedar trees on the way there.  And after ending up hiking for hours through scenery that allowed me to really appreciate how beautiful this area is, I couldn't bring myself to go up what probably were fewer than 100 additional steps to actually pay a visit to the Chusha (middle shrine) that day.

Maybe you can chalk it down to my having a completist streak since I've actually not only already been to the Okusha but also the Kuzurysha (which, for the record, is supposed to be the oldest of Togakushi's shrines -- older even than the nearby Okusha which dates back to the 9th century), and passed by a separate Tenmei Inari shrine located near Kagami-ike, which doesn't get much mention (or even named) in most maps and tourist literature for the area!  But I think it's really more because having found out how gorgeously scenic this part of the world is, I suspect that the trek(s) to the three Togakushi shrines I've yet to visit would offer up still more views that will make one feel so very blessed to be there. :)
Posted by YTSL at 11:59 PM

Closes thing to any thing like that would be at one of healing or peace garden.
Coffee is on

Some people have said that walking along the avenue of cedars feels like walking in a cathedral -- but I like your analogy/comparison better! :)