The Birth of Sake will have you appreciating the drink, and those who make it, all the more (film review) 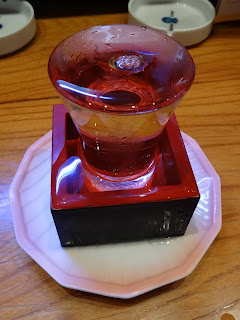 Cheers to those for whose hearts are gladdened
by the sight of a generous serving of sake :b


It's not often that one sees someone waiting to get into a film screening pull out a prized bottle of sake from his bag and have the group of friends he was with ooh and aah over it.  But that's what happened before the Hong Kong Asian Film Festival screening of The Birth of Sake, a documentary about one of the few sake breweries that make the alcohol known as nihonshu in its native country but more usually sake (which actually is the Japanese word for all alcohol) by hand, that I attended last Saturday.

First-time director Erik Shirai's film takes viewers behind the scenes of the 144-year-old Yoshida Sake Brewery located in Ishikawa prefecture to see how sake is made the time-honored way by the small crew headed by its toji (master brewer), 65-year-old Teruyuki Yamamoto, that includes his middle-aged son, Hideki, and the brewery's heir apparent, 27-year-old Yasuyuki Yoshida.  In the process, it gets shown how much work, effort, attention, care, and personal sacrifice is needed to make the different varieties of the brewery's Tedorigawa brand of sake.

Consider this: Because handmade sake is a time-consuming, round-the-clock enterprise, all the members of the sake-making team are required to live as well as work together at the brewery for six months of every year.  (Traditionally, it is explained in the documentary, the other six months of the year was spent by the men growing the rice for the sake along with farming other crops.)  And while temperatures drop to below freezing and snow falls in the winter months, the men frequently toil away in hot and humid conditions inside the brewery, rarely emerging from its buildings -- since they eat (communal meals) as well as sleep, socialize and work in them.

Interspersed with the scenes of the men at work (and, albeit less frequently, at play) in the brewery are those shot at other times of the year and taking place in certain individuals' homes.  These -- and one following an older employee as he picks flowers for, then visits his beloved wife's grave -- help flesh out the portraits of individual workers and gives added insight into the lives of these men (and they are indeed all male).  It's interesting though to see how much of many of the men's distinctive character is revealed within the walls of the brewery, when they work as well as when they let their hair down while doing such as drinking -- or enjoying a communal bath!

Although little psychological or any other turmoil is actually focused upon in the film, it's fascinating to observe the actions and interactions of two pairs of fathers and sons: i.e., the toji and his son, and company president Ryuichi Yoshida and his son -- who aspires to be the next toji as well as is being groomed to be the brewery's seventh generation head.  And although we are only get to see and hear a little of the conversations Yasuki Yoshida (aka "Yachan") has with buyers on the occasions when he goes out into the world to introduce and sell the brewery's products, they actually were most informative (notably the discussion about what traditional sake drinkers want, and what people new to the drink frequently look for).

It's hard to make a clear drink like sake look all that "sexy" on film, and The Birth of Sake won't leave you champing at the bit to go quench your thirst after a screening.  (Frankly, I find that many of Yazujiro Ozu's films, during which quite a bit of sake often gets shown being drunk, do that much more!)  What it'll make you do though the next time you have a glass -- or more, probably! -- of nihonshu is to reflect on what's required to create this delicious product, and appreciate all the more the efforts of those who work ever so hard to do so.