A Hong Kong Island hike with plenty of sea views 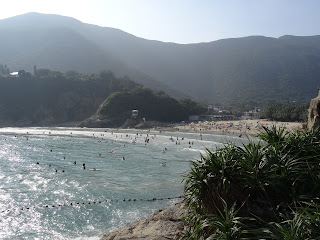 There were lots of people out in the water at Big Wave Bay
this unseasonably hot November afternoon! 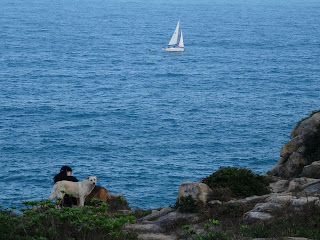 Over at Tai Tau Chau, a woman and her two dogs enjoyed
the sea breeze and the sight of a boat sailing in the blue sea
This afternoon, a friend and I set off on a hike from Siu Sai Wan.  The original plan was to ascend from sea level there all the way up to 312-meter-high Pottinger Peak.  But after we got up to a view compass about 100 meters below the top of the hill that provided us with panoramic views of the sea, we decided to get closer to the water and proceeded to make our way to a couple of seaside locales over on the southeastern end of Hong Kong Island.

First up, down on the other side of Pottinger Peak, was Big Wave Bay.  Long before we got close to sea level, we could already see that there were lots of surfers and swimmers in the bay's waters as well as lots of sunbathers frolicking and sunning themselves on its sandy beach.  Close to the site at Big Wave Bay where prehistoric rock carvings can be found, we also got to noticing a few paragliders floating in the sky post their having jumped off Dragon's Back!
At Big Wave Bay, we saw the temperature being posted as being 27 degrees Celsius (80.6 degrees Fahrenheit) but honestly felt like it was even hotter than that!  Rather than call it a day as far as our hike was concerned however, we pressed on -- this time along a paved road to Shek O, then across a bridge over to the nearby island of Tai Tau Chau, where we spotted still more paragliders making their way down to Shek O's Rocky Bay Beach from Dragon's Back.
Most of the time at Tai Tau Chau, however, our eyes were focused on the beautiful blue sea (and the bigger waves that splashed around the water's edge than over at Big Wave Bay), and also Tai Tau Chau's rugged and interestingly shaped rocks.  And while it was the surfers' antics that made for enthralling watching over at Big Wave Bay, over in this area, it was sailing boats and other watercraft passing seemingly tranquilly by that tended to catch the eye.
Unlike a previous occasion when I visited the area, the waters off Big Wave Bay actually didn't look polluted this afternoon.  Still, I was content not to venture into the water but, rather, just enjoy views of it, preferably from higher land.  If nothing else, today confirmed that I really do prefer the hills to the sea -- but definitely do appreciate views of the sea while out hiking. :)
Posted by YTSL at 11:23 PM

Tai Tau Chau was one location that I tried to roast a chicken in a class picnic quite a few decades ago. Most of the class was scattered around the Shek O area, mostly near the beach. Just two of us walked to Tai Tau Chau to locate a place not to be seen and built a small fire to roast our chicken. The chicken was just double wrapped in tin foil and was then put directly on the charcoal. It was delicious.

I've often wondered whether anyone has ever made use of the barbecue pits on Tai Tau Chau. (I thought they were too far away to lug anything to cook there!) Now I know of at least one person who has! :D

I don't know about the BBQ facilities there, however as Street View Back Pack edition covered the area I browsed the photos and found what you were talking about. These looked pretty new in Street View. I remember there were no such facilities back then. I just selected a sandy slope and started the small fire there.

The bridge was already there then though.

Well, now you know -- re the BBQ facilities! Have to say that they look pretty unused though. As for the bridge: without it, Tai Tau Chau would really be an island -- and hard to get to, right? ;b