Sampling some Tedorigawa junmai daiginjo post viewing The Birth of Sake :b 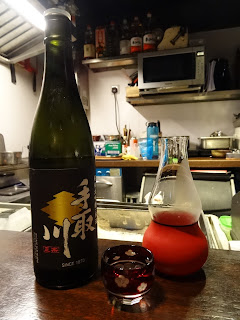 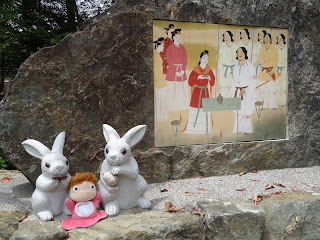 Puppet Ponyo posed with a pair of sake-loving rabbits by
a picture of other sake imbibers at Izumo Taisha last year :)
A couple of weeks ago, I caught a screening of The Birth of Sake, a documentary film that gave me a renewed appreciation of the effort that goes into brewing the Japanese alcoholic drink known to much of the world as sake (the Japanese word for alcohol) but more specifically referred to as nihonshu (which translates as "Japanese liquor") in its native land.
Traditionally considered the drink of the gods in Japan, its connection to the Shinto gods remains clear from such as barrels of nihonshu being on prominent display at shrines such as Tokyo's Meiji Jingu.  And at Izumo Taisha in Shimane, where legend has it that the gods enjoy drinking sake when they gather there annually, there are sculptures and pictorial illustrations that show divine beings and other creatures partaking of the libation!
When watching The Birth of Sake, the work that went into making the Tedorigawa range of sake produced by the Yoshida Sake Brewery made it seem like they'd most definitely be fit for the gods.  Consequently, when offered a chance to sample Tedorigawa's Honryu junmai daiginjo at Sake Bar Ginn last night, I of course jumped at the chance to do so -- and am glad to be able to report that it's indeed a lovely tasting drink, so smooth that it really does go down very easily, and possessing a delicate flavor that's really pretty pleasant!
So... I may not have had the pleasure (yet) of dining at Sukiyabashi Jiro after viewing Jiro Dreams of Sushi or eating at Taishoken post viewing The God of Ramen.  And I know that whatever chances I had to eat at El Bulli are long gone (since Ferran Adria's restaurant has permanently closed its doors a few years back).  But at least I got to have a few glasses of the Yoshida Sake Brewery's product -- and I didn't even have to go all the way to its premises in Ishikawa to do so! ;b
Posted by YTSL at 10:02 PM