She Remembers, He Forgets -- and we dream? (Film review) 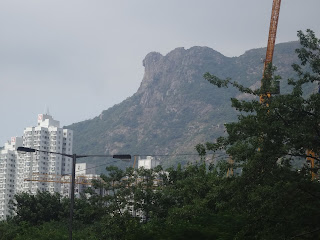 The iconic geological formation known as Lion Rock
is visible in the background of more than one scene in
She Remembers, He Forgets


Although I've checked out my share of Hong Kong movies in the past few months (especially if one includes Hong Kong-mainland China co-productions like Mabel Cheung's A Tale of Three Cities, Johnnie To's Office and John Woo's The Crossing II), it wasn't until I viewed this latest offering from Adam Wong (The Way We Dance) that I got to remembering how it feels to love a new Hong Kong film I just saw.


She Remembers, He Forgets opens with panoramic views of Hong Kong shot from above that are so breathtakingly beautiful that the viewer might find it difficult to take in the credits appearing atop of them.  Pretty much from the get go then, the signs are there that the makers of this film have a love for their native territory; this even when there are those who maintain that "Hong Kong is not a place for dreamers" and others want to leave the Fragrant Harbour, believing that better futures are to be had elsewhere in the world.


Part of this sentimental dramatic offering takes place in the present day, with the focus in those scenes being on a not particularly happily married middle-aged couple.  Travel agent Gigi (Miriam Yeung) has not gone on a holiday with her designer husband, Shing Wah (Jan Lamb), for five years now.  This wouldn't matter so much if they didn't spend so little time together at home that Gigi seems to talk more to her pet cockatoo than her spouse and often doesn't know what the latter is up to, and even where in mainland China he's been for business.


A high school reunion dinner gets Gigi thinking back to those days at school when she (played as a teenager by Cecilia So), the more fun-loving Shing Wah (played as a teenager by Neo Yau) and another student, the brainy Bok Man (Ng Siu Hin), were well nigh inseparable.  Inevitably, she gets to wondering what became of Bok Man, who had aspired to become an airline pilot, and whom both she and Shing Wah lost contact with years ago -- and whether she had made the right choice of man to live her life with.


Considering what a superstar she actually is and how much of an entertainment industry veteran he is, Miriam Yeung and Jan Lamb are utterly convincing as an everyday Hong Kong couple, with unfulfilled (in Gigi's case) and seemingly plain forgotten (in Shing Wah's case) dreams and ambitions.  But She Remembers, He Forgets soars less because of their performances but due to the younger trio of Cecilia So, Neo Yau and Ng Siu Hin -- the latter two of whom were making their feature film debuts in this movie -- having so very ably shouldered the responsibility of being the heart and soul of this admirably sincere offering.


Put another way: the main events in She Remembers, He Forgets are those set in the past and give a good sense of what it was like to grow up in the last few years before Hong Kong was handed back to China.  Beautifully shot in such a way that even those who didn't live in Hong Kong in 1992 will be swept by a wave of nostalgia, the scenes depicting the adolescent Gigi, Shing Wah and Bok Man's schooldays are filled with lots of interesting details, and imaginative inventions credited to the two boys.


But while there's much to look back with fondness, it also can be painful to see what was thought possible then but has turned out to not be, both personally but also politically.  I'd wager that the more you love Hong Kong, the more She Remembers, He Forgets will come across as a bittersweet work, albeit one whose makers remain hopeful that some childhood dreams can be rekindled in adulthood even while others have to be left as memories of what could and might have been.

It's good news for me that you've viewed a Hong Kong film that you can really love...I noticed you've listed Swordsman 2 as a recent re-watch - a well-deserved 10...Now that's one film I would like to see in a theatre. I only wish these old Hong Kong classics had been filmed in synch-sound - they would seem even better than they already are. Even so, they are still movies that I could dream about!

There are many Hong Kong films that I love but, alas, few 2015 Hong Kong productions! FYI, saw "Swordsman II" on a big screen at the Hong Kong Film Archive last Sunday and it was such a wonderful experience that I was still smiling about an hour after the screening had ended!

Like you, I used to think those films would have been better if filmed in synch-sound but now I'm not so sure. I think if filming synch-sound impedes some of the action they could pull off then. On the other hand, I suppose they could easily choose to shut out unwanted background noise by making great and copious use of music like they did in movies like "Swordsman II".