There's a Dinah Washington song entitled What a Difference a Day Makes that I've loved ever since being introduced to it by Wong Kar Wai's Chungking Express.  Every once in a while, I think of it and reflect on how it really is true that one's life, mood, etc. can seem so different 24 hours later.  Then there are those days when it seems like things -- or, at least, climactic conditions -- can vary hour to hour, never mind be different from the previous day.

Such was the case the day that I first made my way along the first half of Section 3 (or Stage 3) of the Maclehose Trail; with my notes of that hike on the Sai Kung Peninsula -- a body of land which actually is larger than the whole of Hong Kong Island -- including the observation that we had experienced weather so changeable that it had been variously super cloudy, a bit rainy, sun-shiny, cool and warm in the space of a single afternoon!  Still, when looking at the photos I took, it seems that regardless, it all looked pretty visually stunning that day! :) 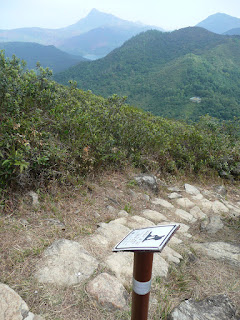 It was the kind of day out in the Hong Kong countryside
when the hills in the distance, not just the sky, looked blue :b 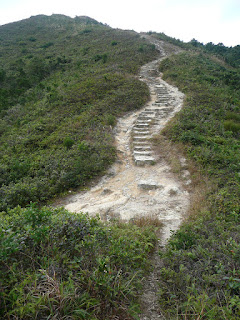 On steep sections of trail such as this, stone steps are welcome
on the way down but not necessarily so when going up! 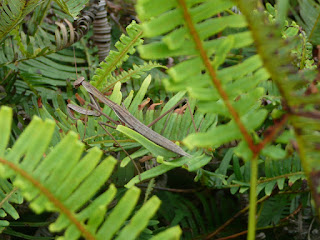 Even while huffing and puffing, it pays to keep a look out
for cool critters, like this large praying mantis :) 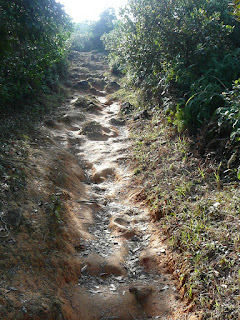 A section of the trail I could easily imagine turning into
a muddy waterfall during as well as after a downpour! 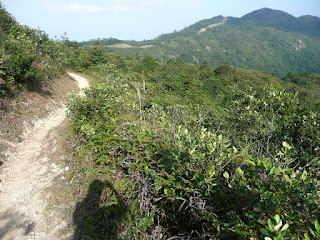 That's actually my shadow in the picture but it
doesn't look all that human, does it? ;b 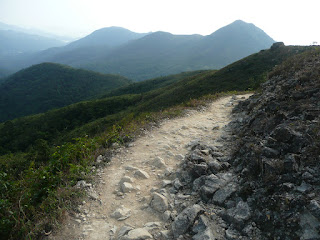 To doubting Thomases: yes, there really are
parts of Hong Kong that look like this! ;b 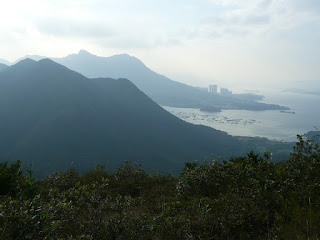 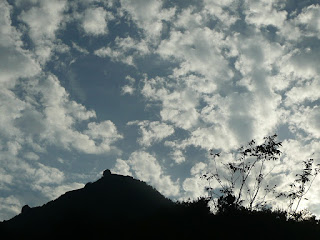 But the friend I was with on this hike and I elected that afternoon
to leave the Maclehose Trail before we even passed Lui Ta Shek! ;b
Posted by YTSL at 11:04 PM

Out of your photo archive you've assembled images and added comments that create a narrative of what must have been a memorable hike. This stage of the MacLehose doesn't look like an easy family trek, but more like an excursion for the serious hiker.

The second photo from the top of the serpentine trail steps, is a beauty...Fifth photo from the top of your phantom-like, ghost-of-a-past-explorer, shadow self-portrait - makes me think of the transitory nature of our existence...The photo directly below this, epitomizes what I look for in a secluded section of a trail, yet one that is not that far from civilization!

It was indeed a memorable hike. When I repeated it recently, it was surprisingly how much of the route I remembered! And yes, would definitely agree that this is not an easy family friendly trek -- which is why I was shocked to see a family (complete with young kind) looking to be trying to attempt it when I recently ventured there!

Upon talking to them, my hiking friend and I found out that the father had mixed up Pak Tam *Chung* and Pak Tam *Au* for a hike start. Fortunately, we redirected them to where they had actually wanted to go before they had ventured (too) far along that section of the Maclehose Trail!