From Lo Fu Tau down to Mui Wo (Photo-essay)

The Lo Fu Tau Country Trail is, of course, named after the 465-meter-high Lo Fu Tau (Tiger Head) that looms large over Discovery Bay. But as I've actually realized, it officially only covers the less steep path between Lo Fu Tau and A Po Long (where it meets up with the Olympic Trail between Pak Mong village and Mui Wo) but not the steep trail that my two hiking companions and I went up along from Discovery Bay!

The official hiking trail is pretty nice to go along, being fairly easy and taking one through scenic countryside where interesting rock formations (with names like The Divine Peach Rock and Strange Duck Stone) are to be found.  Those unaware of the Hong Kong hiking authorities' peculiarities need to note, however, that it's one of those official named trails that requires a bit of trek to get to either of its end -- so it has to be combined with other hiking paths, as was the case for our excursion from Discovery Bay via Lo Fu Tau and A Po Long down to Mui Wo (one that's a good bit more strenous than the hikes from Discovery Bay to Mui Wo via the Trappist Monastery)! 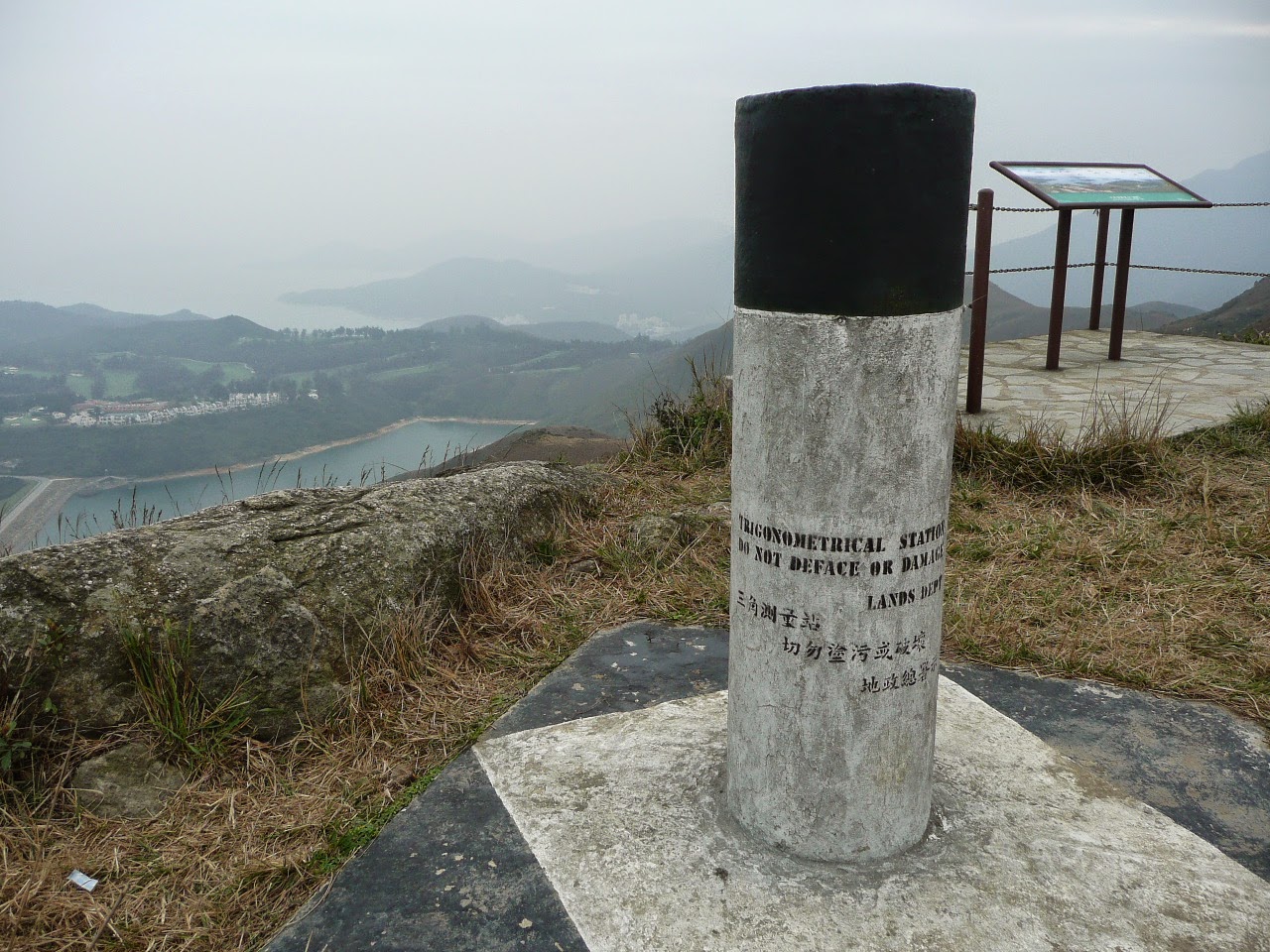 Atop Lo Fu Tau is the inevitable trigonometrical station,
viewing points and a nice view of the surrounding countryside :) 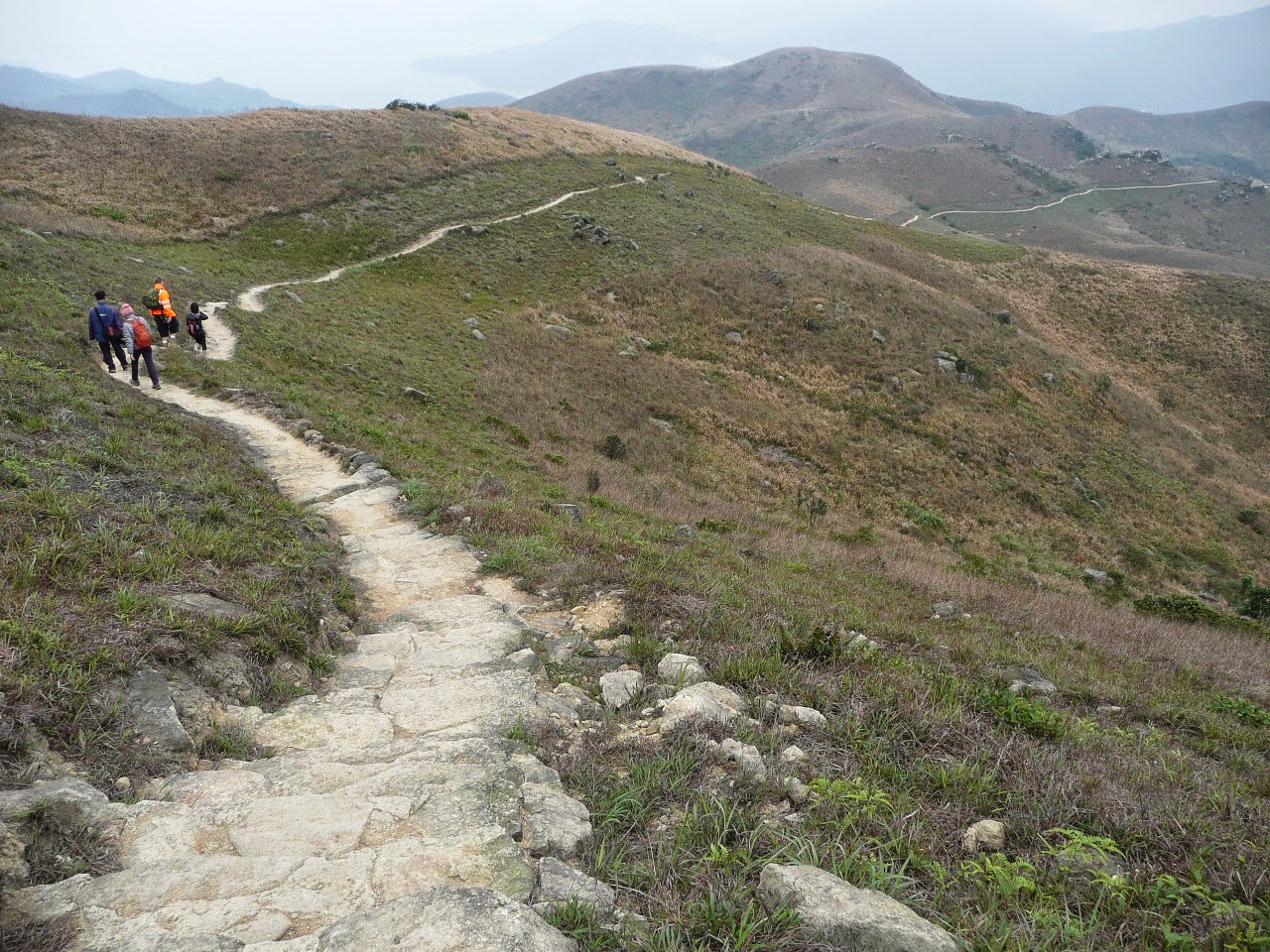 Going along the Lo Fu Tau Country Trail now, one passes through
grassy landscape where rock formations are more abundant than trees 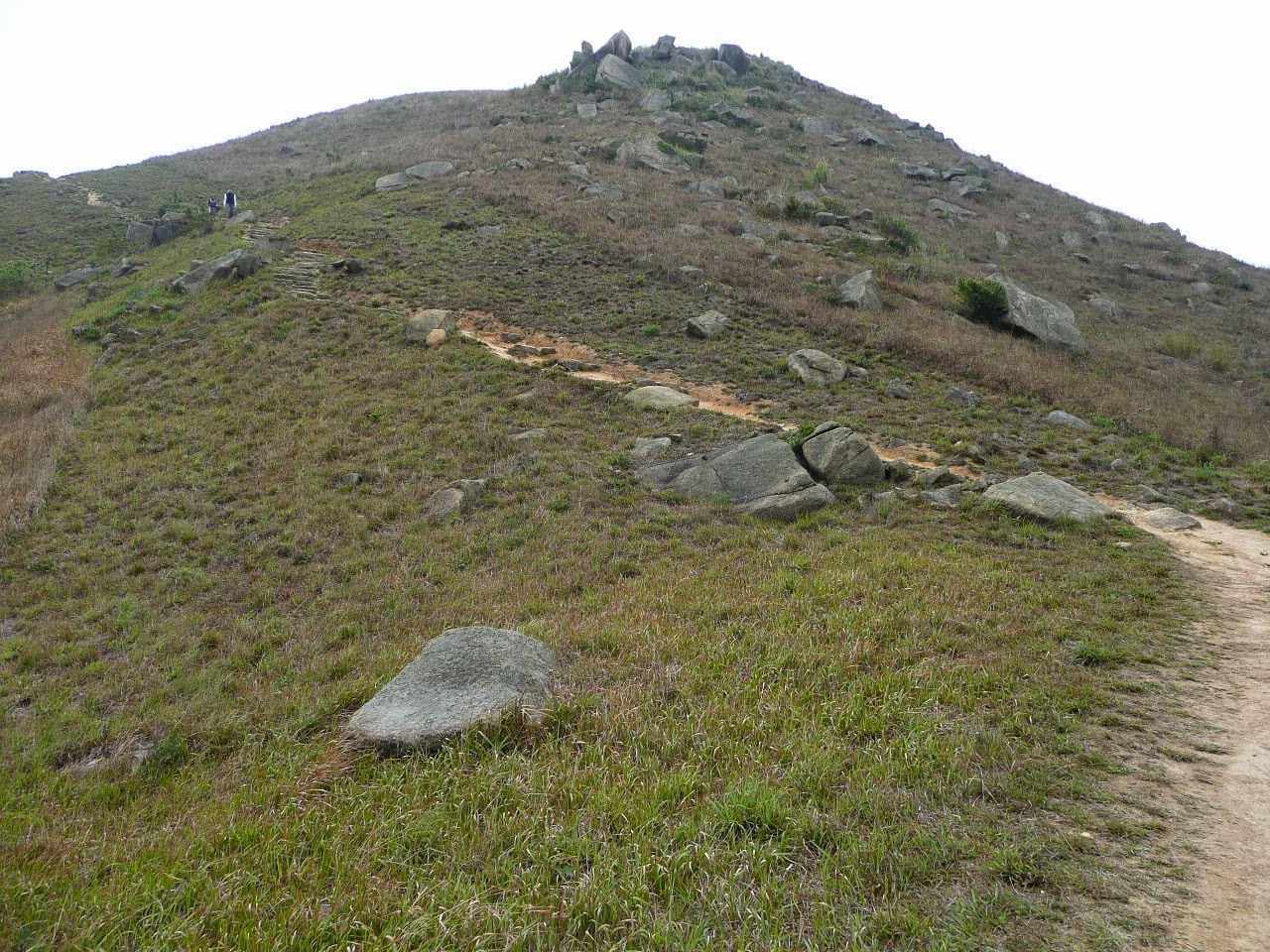 A glance back along this section of trail shows a side of Lo Fu Tau
that's less imposing than the one which faces Discovery Bay ;) 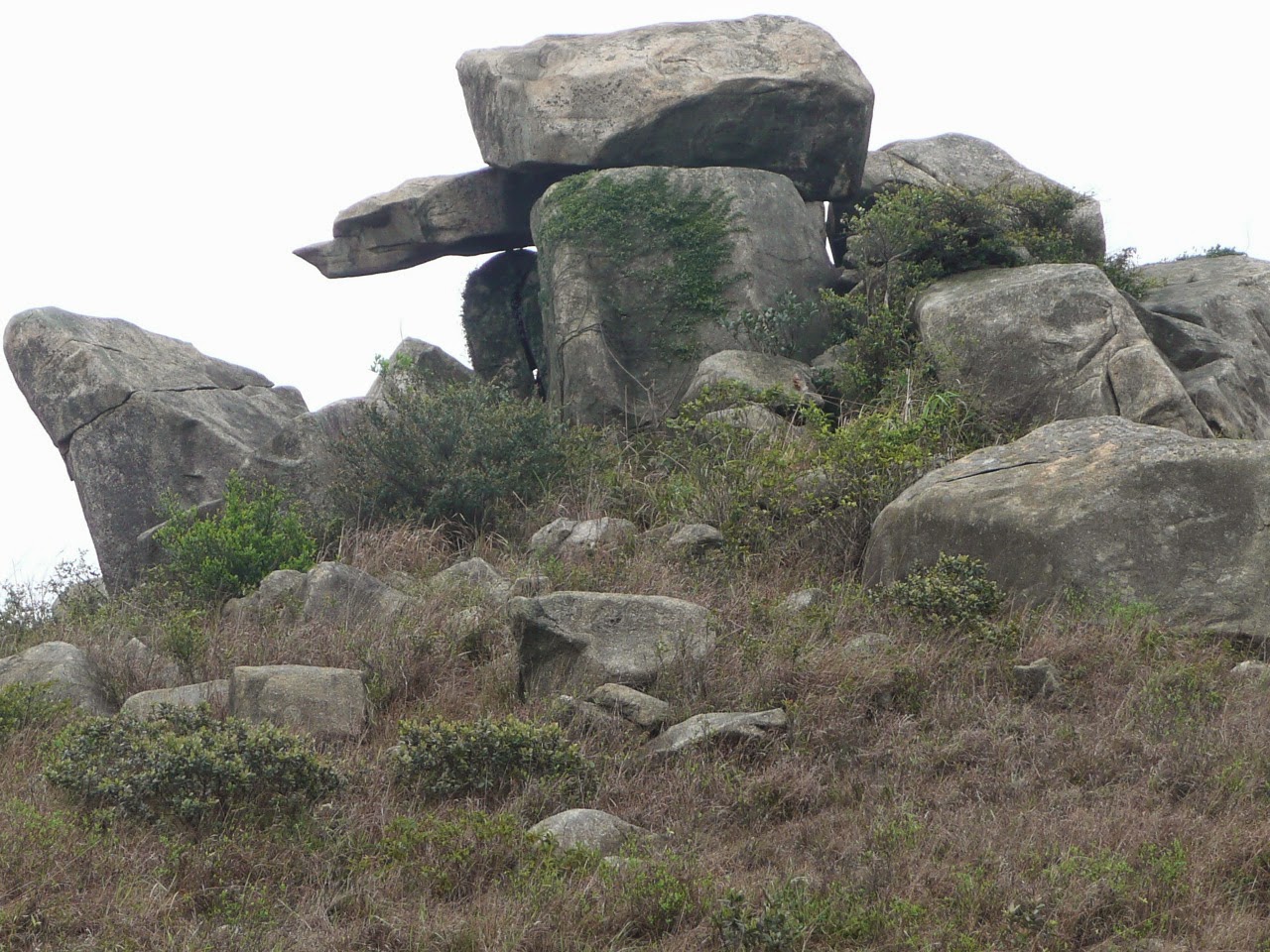 Does this look like a Strange Duck (Stone) to you? :b 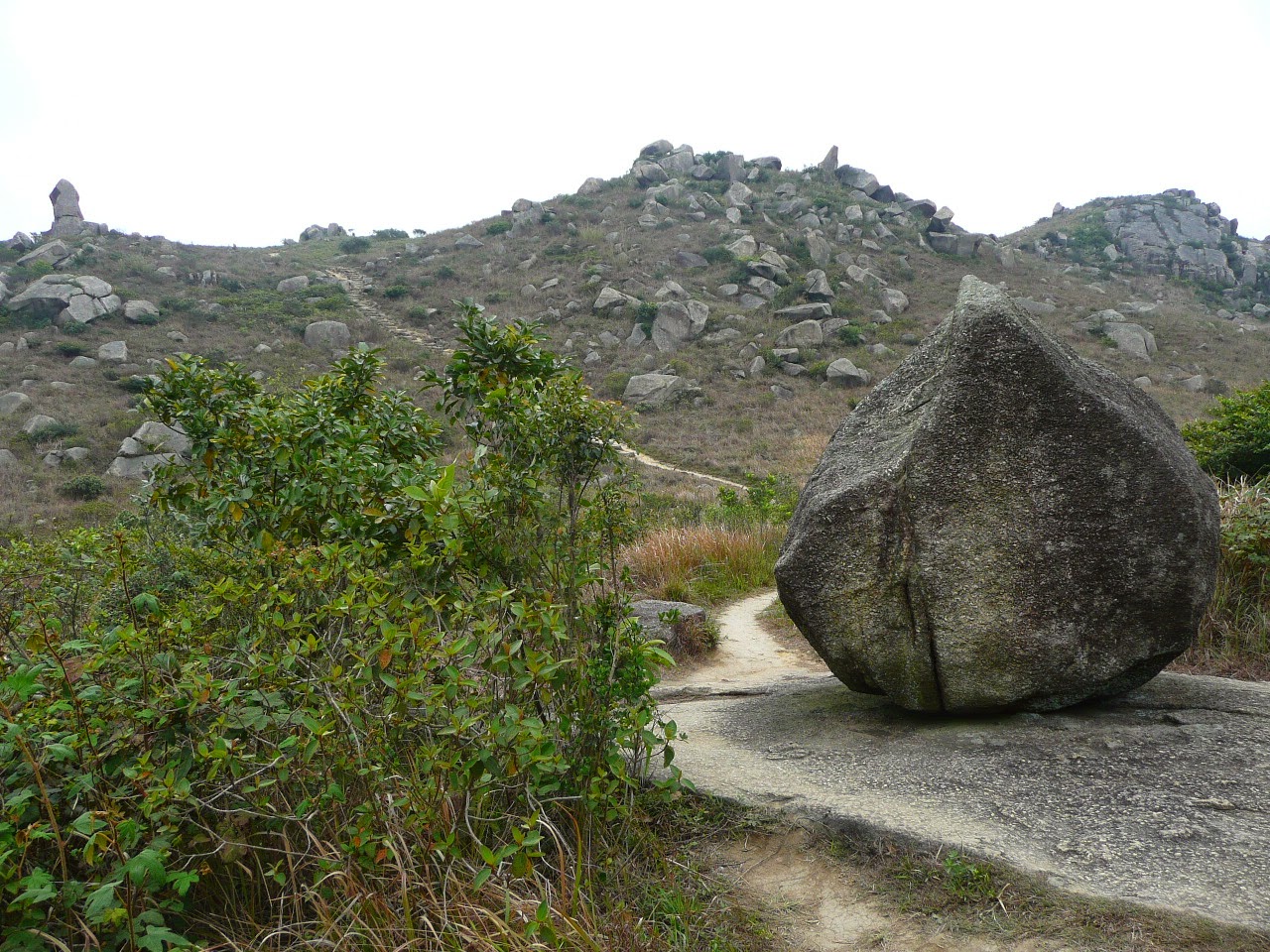 In the foreground is The Divine Peach Rock
and in the background, tons of other rocks! 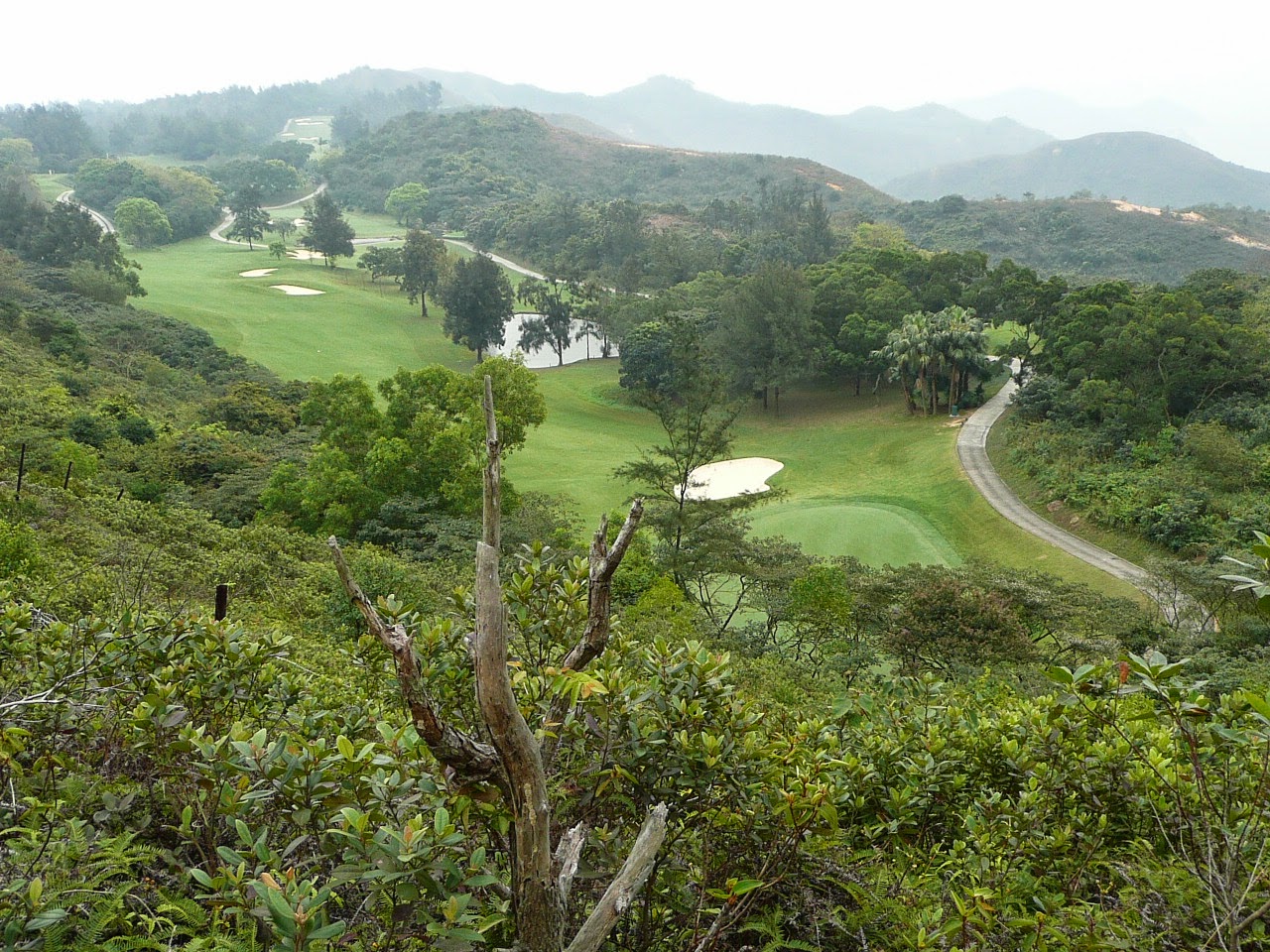 Like a mirage, the greens of the Discovery Bay Golf Course
come into the view at certain points in the hike 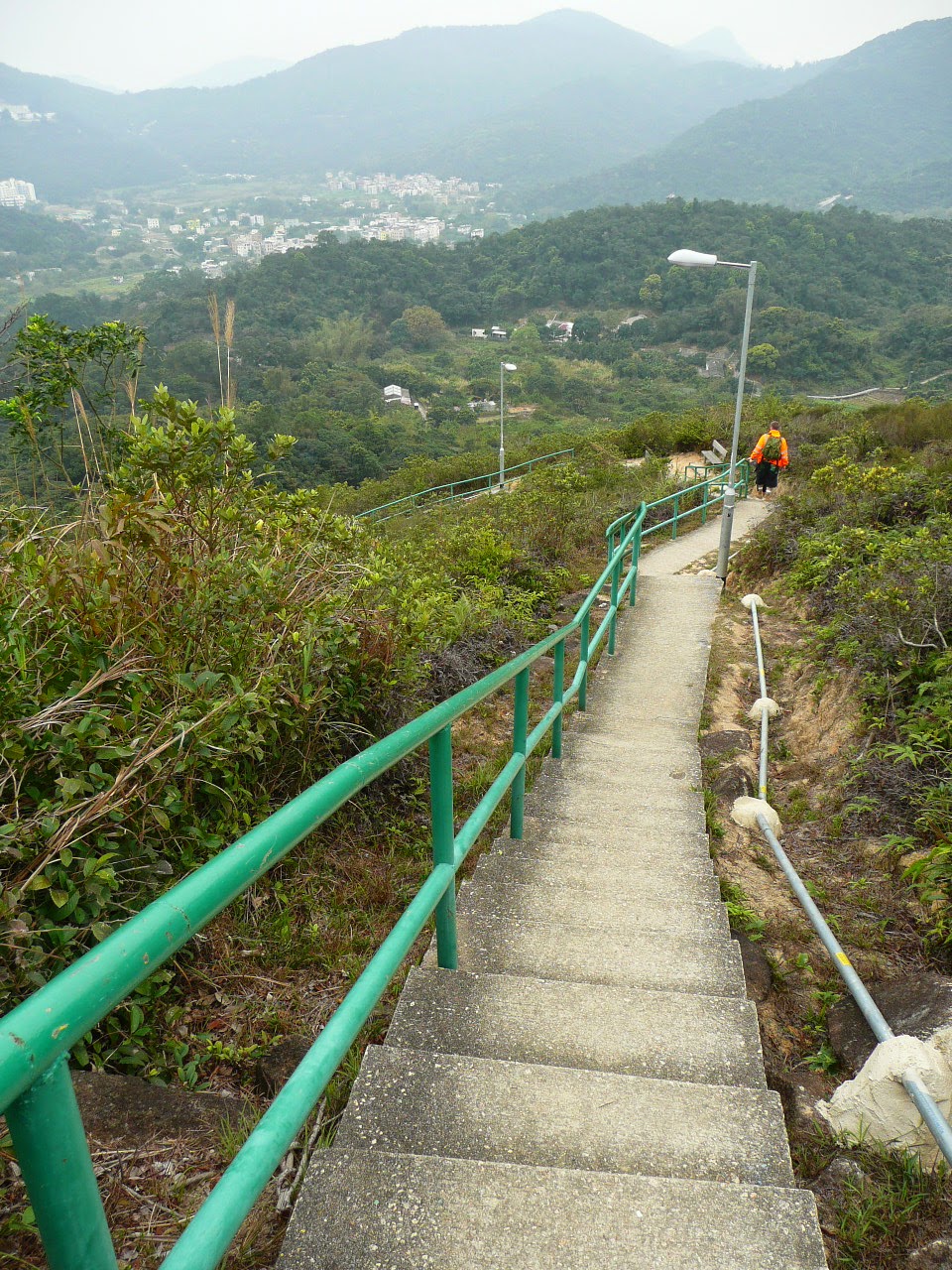 Once you get onto the Olympic Trail, you know that
Mui Wo's down the hill (via lots of concrete steps) 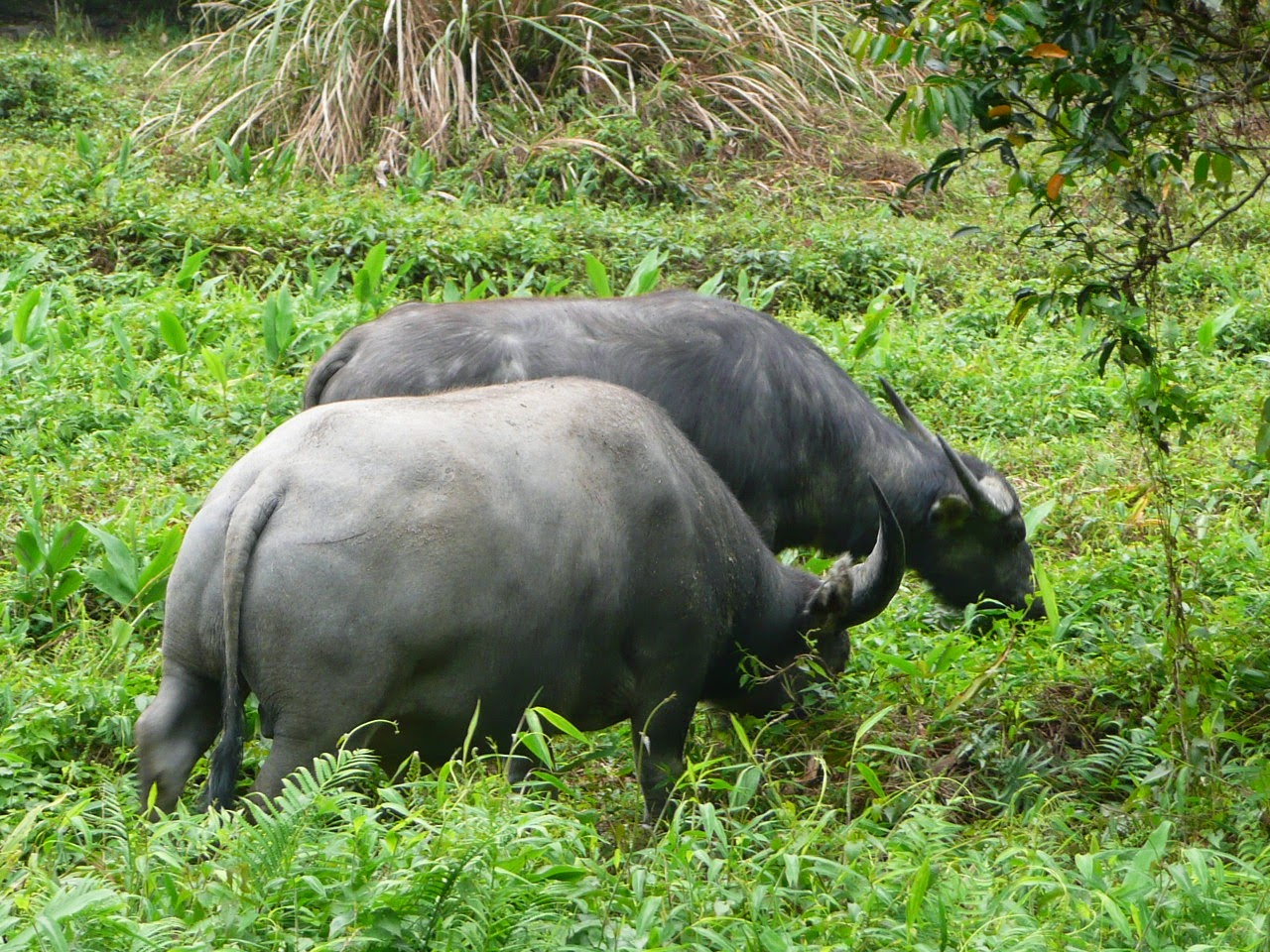 A couple of Lantau buffalo having a meal on the
outskirts of Mui Wo greet our return to "civilization" :)
Posted by YTSL at 1:50 PM

No less than your previous "Going up to Lo Fu Tau from Discovery Bay" blog, this entry is filled with photos which tell a story of an interesting hike. The rocky terrain looks as if it is a must-see sight for those who like rocks, just as Po Toi is.

Duck Stone resembles a megalithic rock formation...Just looking at the photo of Divine Peach Rock, I feel motivated to actually visit it. Well, I don't know if I would find the Elixir of Immortality at this rock, but the vibes coming from Divine Peach rock are strong indeed.

I'm glad that the two Lo Fu Tau photo-essays do give some idea of how interesting the hike from Discovery Bay to Mui Wo via Lo Fu Tau was/is! And yeah, that area's indeed one of those in Hong Kong that people who like rocks -- on particular like for geological formations to get their imaginations going -- should check out. :)

I did this route last Sunday the other way round, starting from Mui Wo. It was an improvised hike after trying to check out possible location for former salt pans in Mui Mo.

It was a hot afternoon but a nice day. Took me a around six an a half hours including take a few breaks. Fortunately I wore my hiking boots this time. Might run into difficulties getting down the slopes to Disco Bay if I did not.

Astonishingly, there were quite a few people going up from Disco Bay even after 1700 hrs. Many of those without head lights or hand tourch. Maybe they want to go up star-gazing?

OMG re your going down Lo Fu Tau! It's quite climb up it but I still much rather go up this super steep hill than go down it!

Were those people you saw going up from Discovery Bay actually looking like they were going to go up all the way or just to that pavilion on the lower section of Lo Fu Tau? Am suspecting the latter.

BTW, for those who want to know more, here's a link to a blog post showing the way I went up Lo Fu Tau (and T down it!)...

I walked by those people at about just 1/3 to half way from the top. Most are experienced (and mostly expats) couples, but one young local couple seemed uncertain.

I had had some chit-chat with the uncertain pair, trying to talk them to turn around but after they heard how I describe the other side wasn't as difficult they went ahead, despite they did not have hand torches or head lights and there would be no street lights until they reach the concrete down hill path near Mui Wo.

I have not heard anything from the news about mishaps so I guess those few pairs going ahead were good after all. Actually there was a guy ahead of me, going down hill very quickly. I wouldn't dare going at that speed these days.

Anyway, I have to admit, going down from Lo Fu Tau might be daunting to many. I was lucky the slopes were mostly dry and not slippery. If it was Saturday I might be in trouble as there had been heavy rain in the morning.

On my way down approaching Disco Bay Hill Road, I did not turn left towards the Pavilion. Instead I follow the road to D-Deck instead as it was already getting dark.

I often think quite a few people who venture onto Hong Kong's hiking trails don't seem to know what they're getting into and feel it's a wonder that more people don't meet with accidents, etc. But, then, I tend to very much err on the side of caution as far as hiking goes -- and count Lo Fu Tau as one of the most challenging hills I've gone up here in Hong Kong.