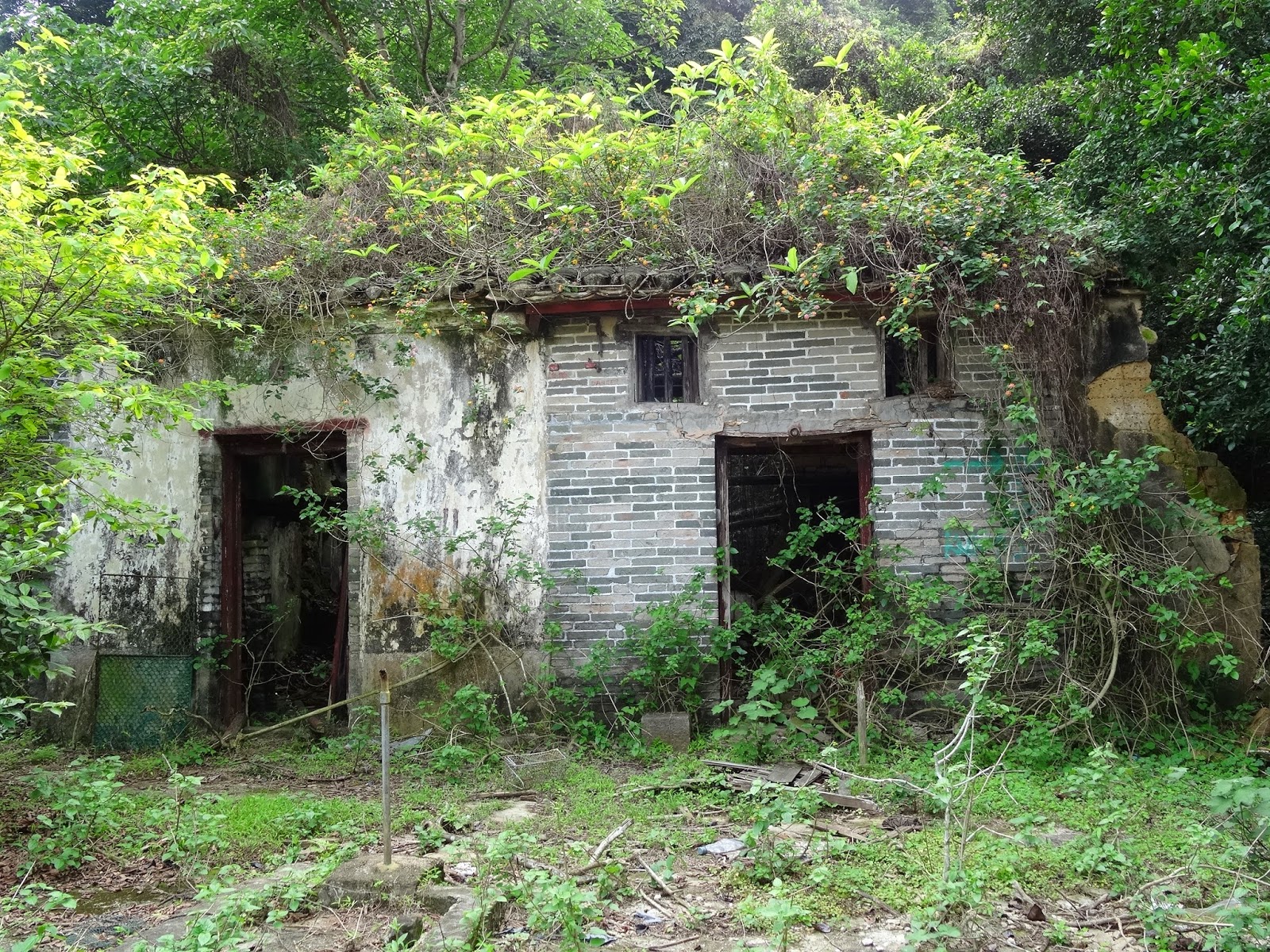 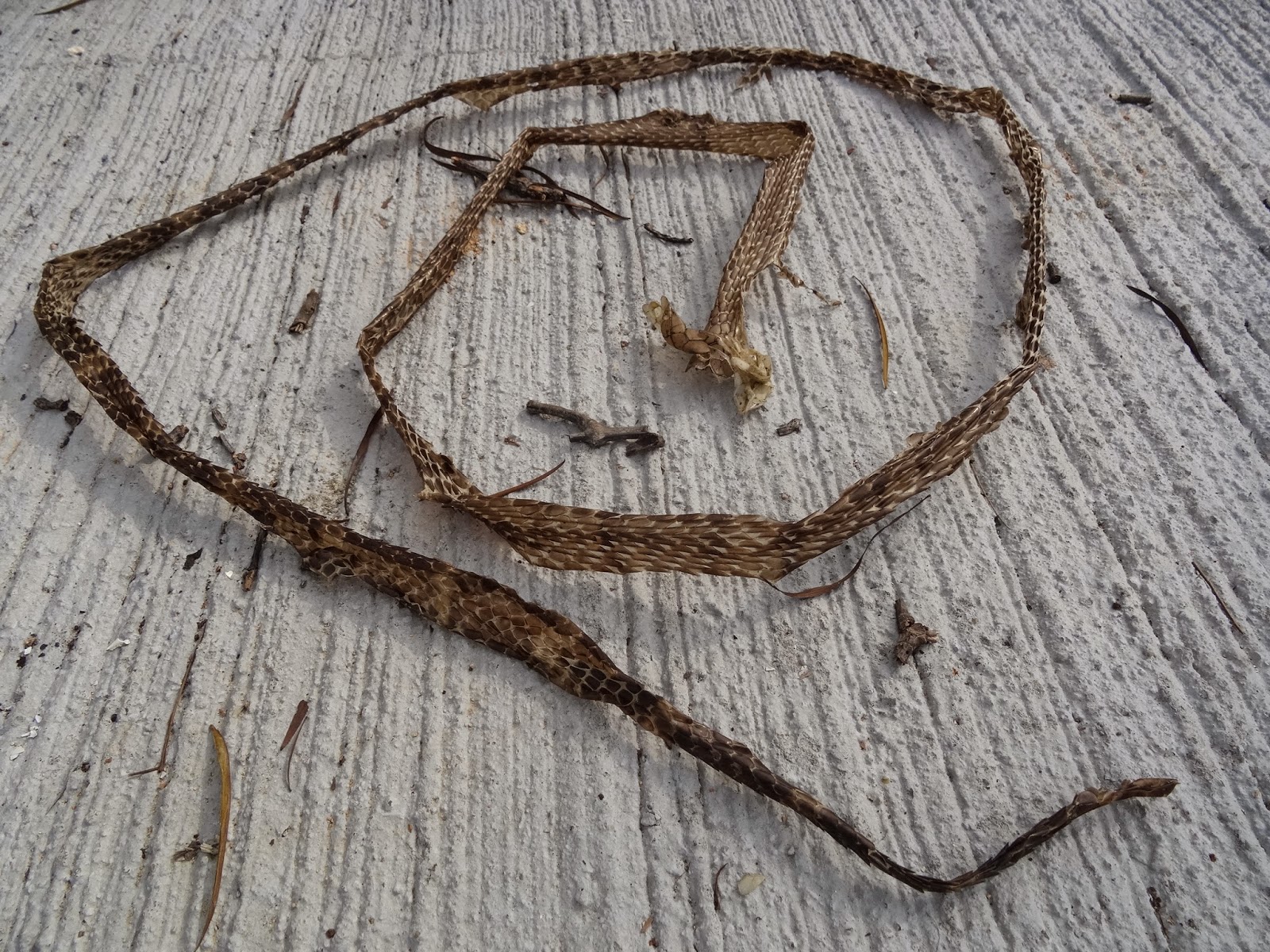 By the village's breakwater, we spotted what turned out
to be an over seven foot long piece of snake skin! :O 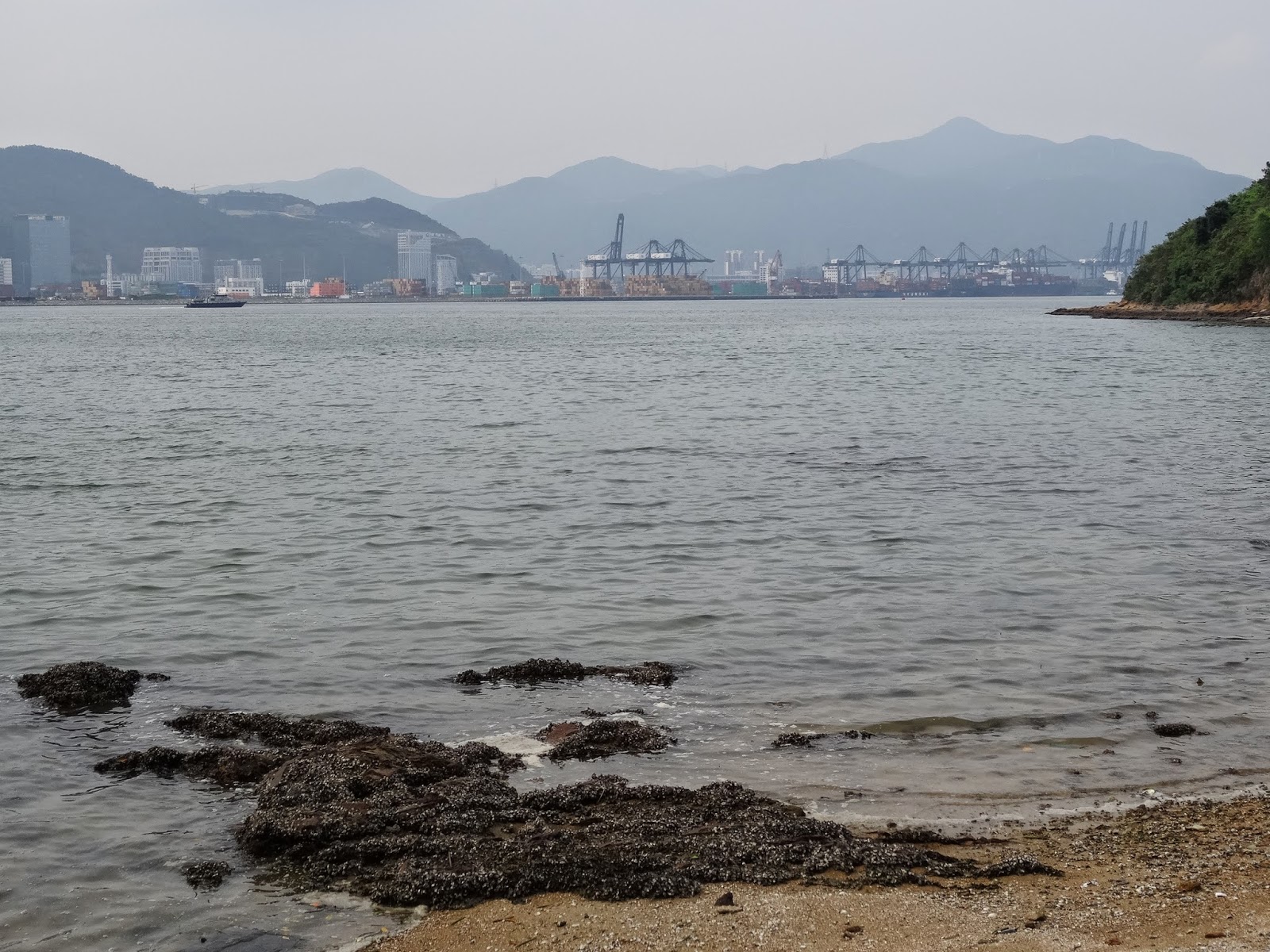 The view from Yung Shue Au's breakwater looks out across
the water to Shenzhen and -- this afternoon -- a police boat
patrolling the waters separating Hong Kong and Mainland China
A little more than a year ago, two friends -- one a regular hiking buddy, another a solitary hiker we met along the way who asked if he could join up with us -- and I paid a visit to So Lo Pun, an abandoned village in the Northeast New Territories with a reputation for being haunted.  Along the way, we passed through the less (in)famous abandoned village of Yung Shue Au (whose Cantonese name translates into English as "Banyan Pass"), and I made a mental note that I'd like to make it the destination for another hike somewhere down the road.

After reading that the trail from Luk Keng to this area may be in danger of getting cut off for hiking purposes a couple of weeks or so ago, I decided to head out there earlier today -- again, with one of my friends from before along with one who I've now been regularly hiking with for a while but who I hadn't met this time last year.  For both the latter, who had never been in this part of Hong Kong prior to today, and my other hiking friend and myself, today's excursion proved to be a really interesting one -- in terms of the experiences to be had along the way to Yung Shue Au and out of it, and also in the village itself and its surrounding area.

Probably the most memorable thing about the overall hike was actually audio rather than visual: specifically, we heard an incredible amount of loud frogs that were making noises that sounded more like dogs' barks than the "ribbit"s they supposedly emit (at least as far as English speakers are concerned), particularly near the (largely?) abandoned village of Kuk Po and the (barely) still inhabited village of Fung Hang.

At Yung Shue Au, our getting swarmed soon after arriving in the area by insects that looked too big to be mosquitoes but buzzed around like them threatened to be the most memorable experience there -- and also threatened to cut short our visit to the area!  Fortunately, however, we found a path that led to the breakwater and were very pleased to find lovely breezes there that were not only refreshing but drove those scary as well as irritating bugs away.
For those reasons alone, we were happy to linger for a time on the breakwater.  But the views to be had from it also were pretty attractive.  And, when we looked closer to where we were, we also spotted interesting things -- including fish actively swimming about in the waters on both sides of the breakwater, and what I initially thought was a piece of rope but turned out to be an over seven foot long piece of shed snake skin!
As it so happens, it's been months since I've seen a snake while out hiking.  The sight of the snake skin served as a reminder that there are snakes in Hong Kong, and some pretty long and big ones at that -- and, also, that since it's warming up, it's the time of the year again when all manner of critters are back in action, including reptiles along with amphibians (which one sees much rarely than one hears) and insects (some of which -- among them, pretty butterflies and dragonflies -- I like encountering, others of which -- including mosquitoes -- much less so)!  ;b
Posted by YTSL at 10:29 PM

This Yung Shue Au hike for me really is about "sights, sounds"...That great top photo of the abandoned house is a bit forlorn and eerie, but at the same time resonates with ancestral spirits that a viewer might intuitively feel...Even your photo of the snake skin is like the shell of a departed spirit...The link you provide in this text to your So Lo Pun Hike also urged me to make a comment on it.

Thanks as ever for your appreciation -- and your checking out the pages I link to in my blog posts! :)

Thanks for posting your hike to Yung Shue Au. I was born there! I would like to hike there soon
....

So cool re your having been born in Yung Shue Au and coming across this blog post! Thanks to the present unrest in Hong Kong, it's been a while since I've gone on hiking -- but would happily repeat the hike described in this post when the opportunity allows once more.