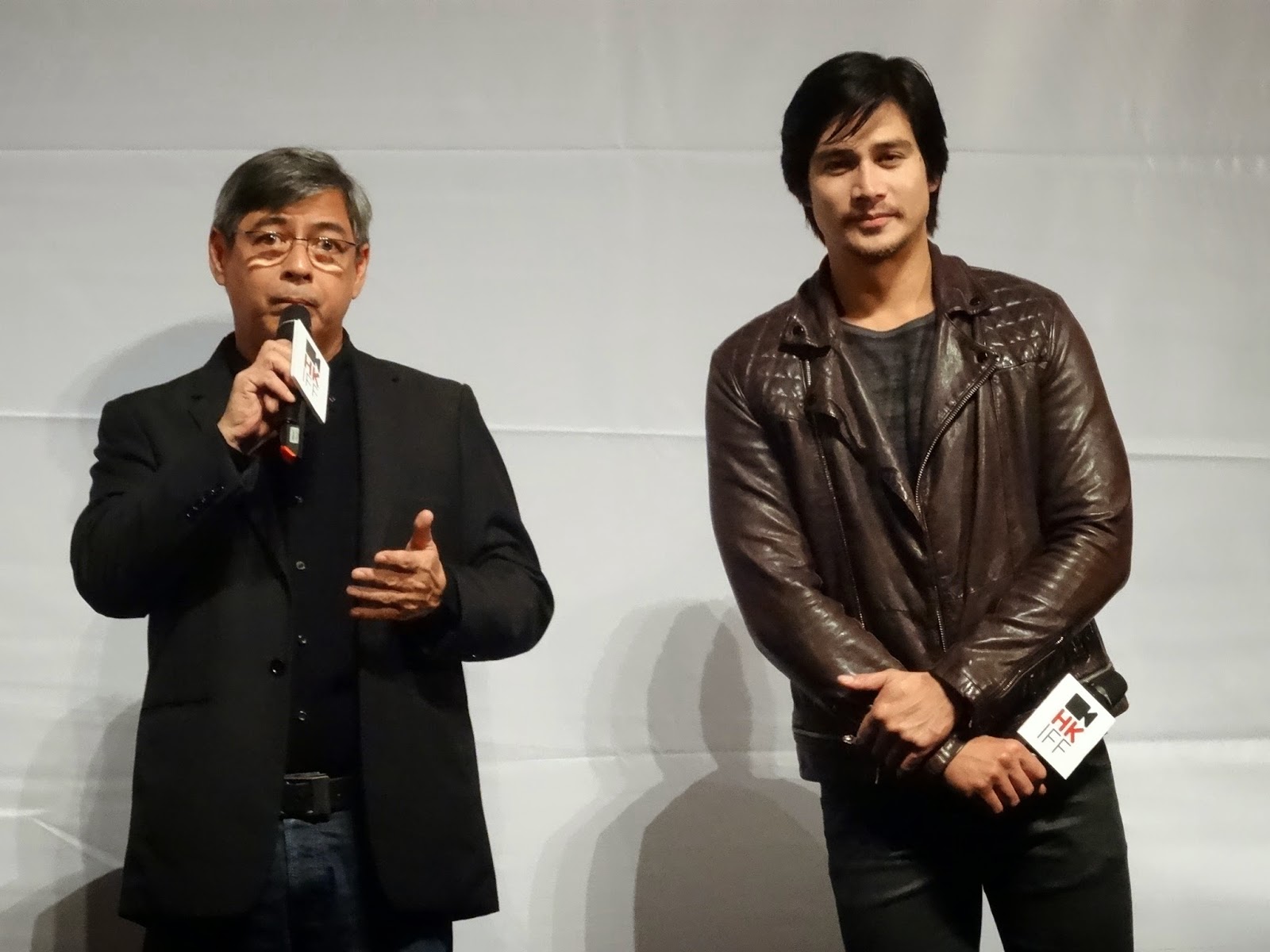 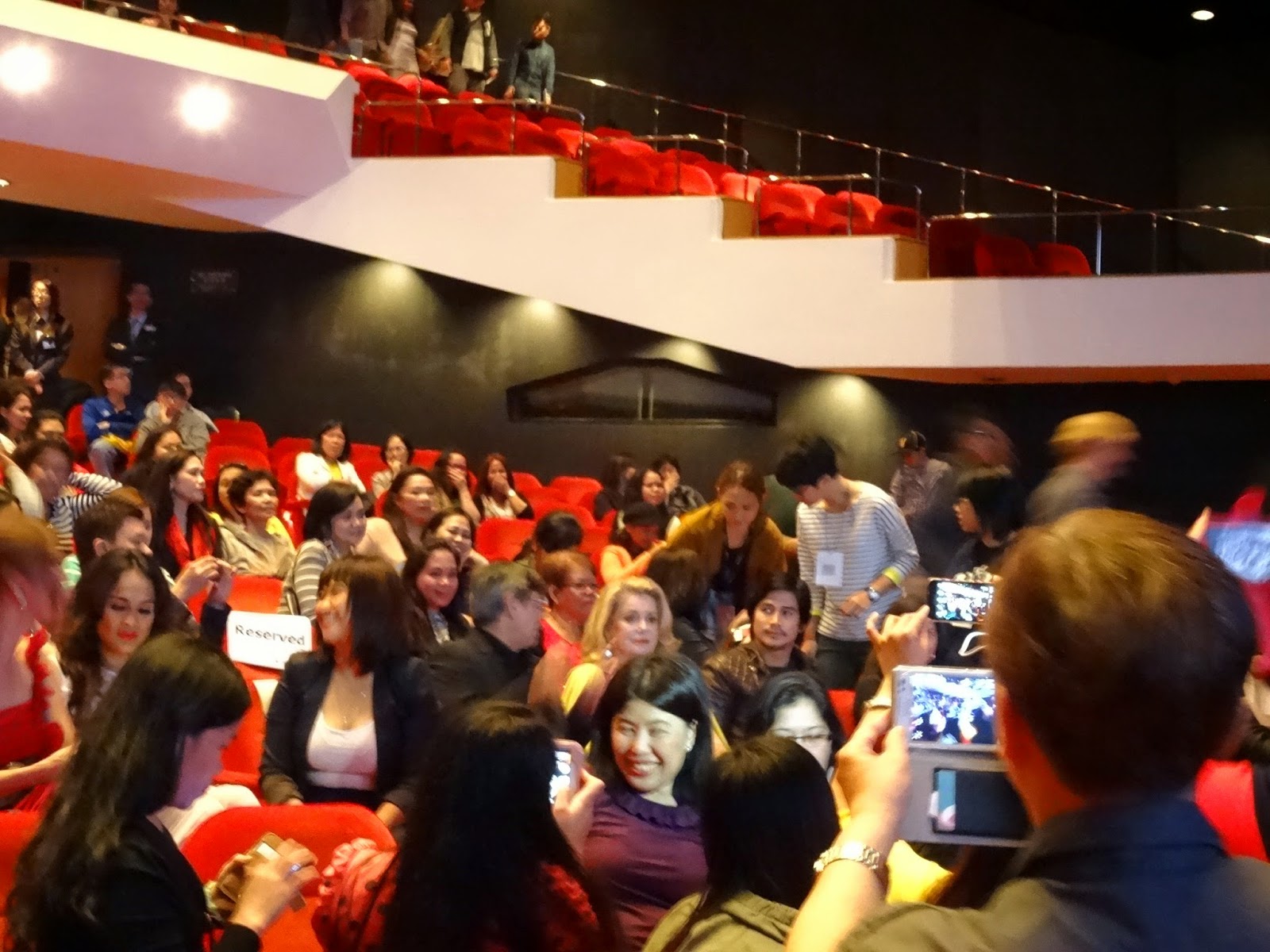 In the audience, along with lots of excited Filipina women,
was French actress Catherine Deneuve :)

Among my most strongest memories of the 2009 Hong Kong International Film Festival was my meeting my favorite Malaysian director, Yasmin Ahmad (it sadly transpired, just a few months before her premature passing) -- and film expert (and fellow blogger!) David Bordwell raving about how great About Elly was. Although he had seen it at Filmart, it also did play at the HKIFF that year -- but it wasn't until this year, when it was included once again in the festival programme, that I finally got to view this 20009 Asghar Farhadi film.

A look at the assembled audience gave me a pretty good idea of how much of a film buff favorite this drama is.  More specifically, I spotted at least three film scholars and a couple of festival programmers in the audience -- one of whom was none other than the professor emeritus from the University of Wisconsin at Madison, happily checking out this Iranian work at least one more time!

As with Closed Curtain, the last Iranian film I viewed at the HKIFF, the great bulk of About Elly takes place at a house located near the sea.  But unlike with the official closing film of the 2013 fest, the group of people that Farhadi's 2009 film revolves around went to that seaside location for a fun holiday rather than to escape the attention of the authorities.

While there are ways in which the people in the party are discernibly Iranian, they also resemble middle and upper-middle class urbanites in many other societies and countries in the world.  Consisting of family units for the most part (except for recently divorced German resident Ahmad and single female teacher Elly), they like to hang out and joke with each other, eat good food, play volleyball and generally enjoy being by the seaside.

Initially, it seems like the main dramatic development in the film will merely concern the efforts of one woman to match-make Ahmad and Elly.  But after a series of events which culminate in the realization that Elly's gone missing, the story becomes about the subsequent search for Elly, and related events pertaining to the young woman who, it's realized, the group doesn't know all that much about after all, besides her first name, her occupation, her having a mother (whose health she worries about) and her not wanting to spend more than one night away from home.

Along with discoveries, also comes speculations and a series of lies that got me thinking of Scottish writer Sir Walter Scott's famous "O, what a tangled web we weave when we practice to deceive"!  As the story unfolds, one can get exasperated by the behavior of various people even while also actually being able to see why they would behave the way they did.

This aspect of the film -- and, also, that no one in the work is either a completely blameless angel or hurtful devil --  is something that those who have viewed Farhadi's Best Foreign Language Film Oscar-winning A Separation (2011) will recognize as among the filmmaker's trademarks.  It also is what I find very refreshing to come across in a world often dominated by Hollywood blockbusters which just aren't complete without one super good guy and mega bad guy along with big explosions and lots of special effects.

More proof that Eugene Domingo is a class act: after the screening of Barber's Tales that I attended, I got a chance to take the Filipina actress' photo and exchange a few words with her.  In response to my telling her how much I had enjoyed the film and thanking her for having helped made it as good as it is, she said thank you -- and then recommended On the Job as another Filipino film to watch at this year's HKIFF (and not another film showing at the HKIFF that she also starred in -- Kimmy Dora: Ang Kiyemeng Prequel!)

The presence not only of its stars but also Eugene Domingo, other Filipino cinema luminaries, Catherine Deneuve and HKIFF Society executive director Roger Garcia at the screening of this crime drama that had its world premiere last year at Cannes confirmed that it was seen as a special film.  Also notable was that its screening at the fest was preceded by a short film, Heart of Storm, showing the devastating impact of Typhoon Yolanda (AKA Typhoon Haiyan) on the sections of the Philippines that it struck, that left me teary-eyed.

If anyone was looking to On the Job to lift their spirits after that, they were very much mistaken that that'd be the case -- for Erik Matti's crime drama is set in a contemporary Philippines that's so corrupt that convicts like steely Mario (Joel Torre) and his raw protege Daniel (Gerald Anderson) are not only able to leave and re-enter prisons with the cooperation of corrupt guards but do so to carry out killings for which they'll be financially compensated!

For much of the movie, it looks like there are only two people in the whole country who have proven incorruptible -- handsome NBI agent (Piolo Pascual really has movie star looks!) and cynical policeman Acosta (Joey Marquez).  But rather than be natural allies, the two men bicker and sometimes get in the way of each other's rival investigations because they distrust each other as a result of their different social and professional backgrounds and statuses.

Unexpectedly, the good guys -- including the good-looking one -- actually are not the focus of this film.  Rather, it's the convicted hit men whose lives and networks are given ample coverage.  The result is a fascinating look at an ugly underbelly of a society that comes across as containing a lot of truth as well as fiction in its depiction.

On the Job's portrait painted of the Phillipines is one that most definitely does not made good.  Indeed, it actually exceeds the ills, woes and faults of a country that I've long been told has its beauty spots but also way too many corrupt bad men (and women).  On the other hand, it's a real credit to the Filipino film industry on account of it being a very watchable movie -- and my experience of viewing this and Barber's Tales at this year's HKIFF has definitely made me more open to checking out more films from that part of the world in the future.

Great reviews, YTSL! I'm particularly interested in ON THE JOB because 1) I've never seen a Filipino film, and 2) it is coming out on DVD in Australia next month!

Hi YTSL, I must confess that I've not seen too many foregin films but the few that I have seen (spanish ones) were wonderful. Your reviews of these two films sounds interesting and if I can find them I'd like to see it. Als, Piolo Pascual is very handsome. :)

Thanks for writing these reviews.

I've seen a few Filipino films before the 2014 HKIFF. Some look like TV productions, others are on the art-house side. That's not the cas either way with "on the Job" and "Barber's Tales" -- and I like that this is not so immensely!

I watch a lot of American movies but also a lot of films from outside of the US. I think that it's good to maintain a balanced cinematic direct. Hope you give some non-American films a try, and that you'll like them!