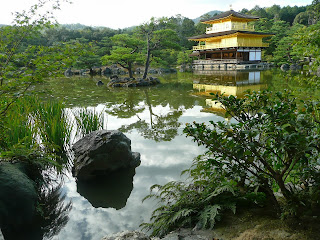 You'd think it'd all be downhill after seeing
something like the Kinkakuji (Golden Pavilion)
on the first day of one's Kyoto vacation... 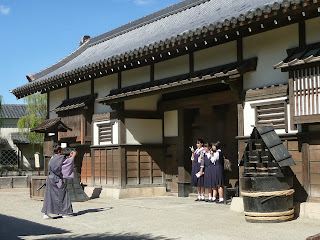 ...but when you consider that this is a city where
one comes across samurai -- okay, 'samurai' --
taking photos of uniformed schoolgirls...! ;b 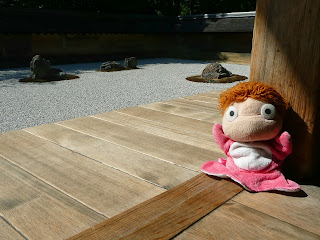 And of course Puppet Ponyo was with me -- and
popped up to pose for photos on visits to such as
UNESCO World Heritage-listed Ryoan-ji :)

I know what you're thinking: i.e., "Japan again?!" And yes, it was only a couple of months ago that I spent a few days in Hokkaido.  But especially since Japan did away with visa requirements for Malaysians on July 1st of this year, I really feel able to indulge my urges to visit a country whose culture and people -- as well as food,  drink and movies -- I've come to love.


This time around, I took off a few hours after Typhoon Usagi visited the area to spend time in cultural heritage rich Kyoto -- one of the places I visited on my first trip to the Land of the Rising Sun way back when I was just 14 years old (and the only one that I've ever been on as part of a guided tour group).

I know there are many people (including the author of Frommer's Japan) who reckon that Kyoto is the number one part of Japan that people should visit.  But, actually, my least positive memories of that maiden Japan visit involved that former Japanese capital city -- with my impressions of it centering on it being a place that was overwhelmingly jam-packed with (other) tourists as well as filled with not much else than temples and shrines.


Now there's no denying that Kyoto is home to many Buddhist temples and Shinto shrines -- literally thousands of them, in fact.  But, as I was pleased to discover, there are other things to see and do when one is overcome by temple and shrine fatigue.  Also, not all of the temples and shrines are -- and, for that matter, Kyoto in general is -- overcrowded with tourists; and this especially if one gets one's day off to an earlier start than many others are wont to do when on vacation!

So yes, it's possible to have a (relatively) diverse, mob-free vacation experience in Kyoto -- if one visits on one's own, as opposed to on a guided group tour.  And most definitely an enjoyable one too.  Something else that endeared this charming city to me is that I saw a lot more Ponyos here than in the other parts of Japan I've visited in the past few years -- and yes, you'll see what I mean in an upcoming entry (and I really am referring to other than Puppet Ponyo here...)! :b
Posted by YTSL at 9:51 PM

It is a pleasure to be the first person to comment on your Kyoto journey - especially after Usagi thankfully failed to deliver a severe Japanese rabbit punch to Hong Kong. Did you visit Sanjusangen-Do Temple in Kyoto?

Poised by the edge of the rock garden, Puppet Ponyo radiates her perennially endearing vacation bliss...Look forward to future photo-essays on Kyoto.

Yes, I visited Sanjusangen-Do -- and have to say that it was one of the (many) highlights of my Kyoto vacation. Am not sure if I'll write about it though since, as I'm sure you know, I wasn't able to take any photos inside its main hall... :S

And awww re your continued appreciation and great descriptions of Puppet Ponyo! :)