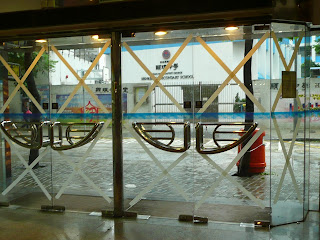 In Hong Kong, taped Xs on glass are a sure sign that
a major typhoon is expected 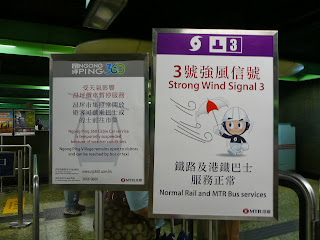 The MTR and buses run when it's Strong Wind Signal No. 3
(but the buses stop running after Typhoon Signal No. 8 is raised)

On Thursday night, after I got home from the Mid-Autumn Festival lantern show at Victoria Park, I received an email from a Canadian friend of mine who told the Canadian consulate had sent out a message about a typhoon that was due to hit Hong Kong within the next few days.  At work the next day, there was quite a bit of talk about what was being described in many quarters as the most powerful of the year (thus far) and even since 1984.

Also included in its message were the following lines: Usagi will make landfall to the east of Hong Kong and will skirt to the north of the territory at around 100 km later tonight and early tomorrow morning. Locally, gales are already affecting high ground and winds generally over the territory will continue to strengthen.

What with my first having heard about Typhoon Usagi some three days ago, it can seem like the typhoon's been moving pretty slowly.  Viewed from another perspective, however, it's quite amazing how it was sunny and hot -- super hot, in fact, with a "very hot weather warning" triggered by temperatures that went up to 36 degrees Celsius -- yesterday but the sky's been consistently gray all day today, with rain starting to fall by around 10am and strong winds that threaten to destroy umbrellas already blowing this afternoon.

Hopefully, Typhoon Usagi's visit to the area will be short (as in over by tomorrow afternoon) and not too damaging.  (It's already caused several flight cancellations and such but a lot of the measures are taken have been precautionary more than anything else.)  And -- touch wood but... -- I do take some comfort in its having already being downgraded from Super Typhoon to "merely" a more regular Severe Typhoon.

*Latest update: By 11am on September 23,  there were no more typhoon signals hoisted!!
Posted by YTSL at 6:20 PM

People make fun of the "concrete box" apartments, but I'm very happy to be inside one at the moment : 0

Time to charge my camera's batteries and shoot some uprooted trees tomorrow.

I know what you mean... definitely wouldn't want to be in one of those squatter huts we've passed by on hikes now, would we? Often we're more fortunate than we realize...

Oh ya, Typhoon Usagi's more powerful than the previous typhoon (the signal no. 10 one!) that blew our way!

Thanks, and all's well on the typhoon front here in Hong Kong. :)

I've been traveling, and a little distracted recently. But when I left Beijing on Sunday, it was suddenly windy and rainy, the far edge of the storm system I think. Hope all was well for HK.

Actually I guess it was Monday in Beijing, I arrived back in Hawaii several hours before I left. So weird!

Oh, I'm relieved to see that the typhoon has passed, and that you are safe and well!

Talking about traveling: I left Hong Kong early last Tuesday morning -- fortunately, my flight not only was able to take off but do so on time... unlike some of the flights just a few hours earlier!

Hope you had a good time in Beijing/mainland China this time around! :)

Not only am I safe and well but I've just returned from a wonderful vacation (hence the blog hiatus)! :)