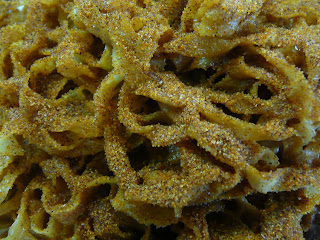 Any guesses as to what this is? ;) 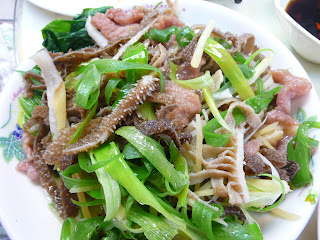 How about this? :b 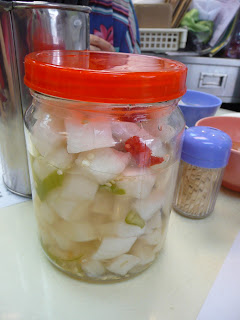 Rest assured that cubes of pickled Chinese radish
and slices of green and red chili peppers
from this jar go really well with the above dishes! :b

Until today, the best shrimp roe noodles I ever had were those at Ping Kee Noodles, the bamboo noodle specialist eatery that Anthony Bourdain highlighted in the Hong Kong episode of his No Reservations some years ago.  But despite absolutely loving the Tai Po eatery's ha jie lo meen, I've only eaten them a handful of times though -- because this very traditional and local establishment is one of those with opening hours that aren't particularly convenient for me.  (Put another way: I've never found this stall in Tai Po Hui Cooked Food Centre to be open when hungry friends and I get into town after a hike that ends near Tai Po!)


So it's with much happiness that I've found another place whose shrimp roe noodles I love.  I actually have been to Lau Sum Kee before -- but previously, I only had the standard thin egg noodles version of the dish whereas today, I tried out the thick egg noodles version (pictured at the top of this blog entry) -- and found that not only did each strand of the thick egg noodles have more surface space on which the shrimp roe could be sprinkled but their texture was an improvement from the more stringy thin egg noodles.

As a bonus, I was able to order a place of cow omasum and beef copiously garnished with spring onions and ginger on a bed of leafy green vegetables (what the middle photo above is of!).  Strange as it may sound, omasum is one of those things I've read about and long wanted to eat -- but hadn't to date because it is hard to find on menus!  And even today, I only managed to order it because the friend I was lunching with today and I spotted a dish of it at a neighboring table and pointed it out to the waitress as something we'd like to have, without naming it (because, frankly, neither of us know what it's called in Cantonese!).


The omasum and the rest of that dish added extra textures to the noodles we ate.  And I found that some of the complimentary pickled Chinese radish and green chili peppers -- I passed though on the red chili peppers! -- further added to the flavor and overall complexity of what actually was a low budget but highly satisfactory meal.

Suffice to say then that I was feeling pretty happy when I walked out of Lau Sum Kee.  At the same time though, I still wasn't fully satiated -- so headed to nearby Wai Kee Noodle Cafe.  This time around, however, I didn't have its signature pig liver noodle soup.  Instead, I opted for its also famous kaya French toast.  And yes, I know that -- understatement of the year coming up -- it's not the healthiest thing to eat.  But truly, it did taste pretty good -- and made for a worthy end to a pretty awesome Sunday lunch in Sham Shui Po! :)
Posted by YTSL at 7:35 PM